The Apple guys at IBM are smiling. Here’s why. (Update with video) 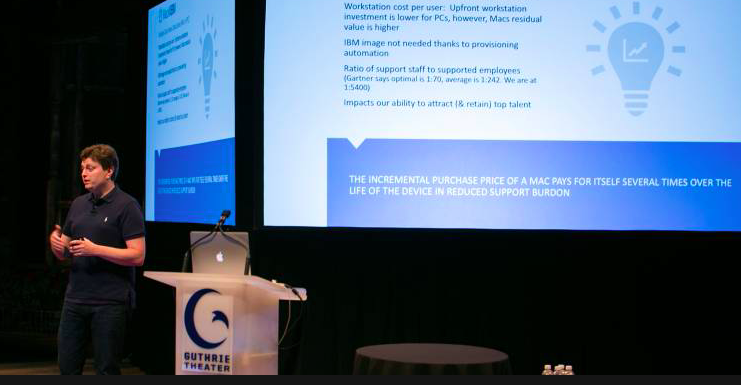 [I’m reposting this piece from Oct. 16 to include the video that JAMF put up today on YouTube. Coincidentally, MacRumors reported today that IBM plans to provide employees free or discounted Apple Watches, depending on the terms of the empl0yee’s health plan. This is not a story about that.]

IBM began officially offering Macs to its 400,000 employees on June 1st, more than three decades after it joined forces with Microsoft to create the original IBM PC.

Until then, the conventional wisdom at Big Blue—and indeed at information technology departments around the world—was that Macs were more expensive, more challenging to support and would require retraining the help desk.

The conventional wisdom was wrong, reports Fletcher Previn, IBM VP of Workplace-as-a-Service and the man in charge of deploying the new machines.

Speaking before a enthusiastic crowd of more than 1,000 Apple-focused IT professionals at a JAMF Nation User Conference in Minneapolis Wednesday, Previn offered a four-month status report:

—IBM has already put 130,000 Macs and iOS devices in the hands of users as part of a partnership with Apple announced in 2014.

—New Macs are currently being deployed at IBM at the rate of 1,900 per week.

—The machines are supported by a total of 24 help desk staff members, which works out to one for every 5,375 employees. (Gartner recommends one support desk person for every 70 users.)

—Only 5% of Mac users at IBM require help desk support, compared with 40% of Windows PC users.

—98.7% of the Mac queries are resolved on the first call.

—PCs are cheaper, but Macs retain more value in the long run.

“Every Mac that we buy is making and saving IBM money,” Previn said.

The news was greeted by a chorus of “I told you so”s.

“I felt a great disturbance in the Force,” wrote blogger John Gruber on Daring Fireball. “As if millions of voices suddenly cried out, ‘We’ve been telling you this for 30 years!’”