Why ‘Steve Jobs’ bombed at the box office 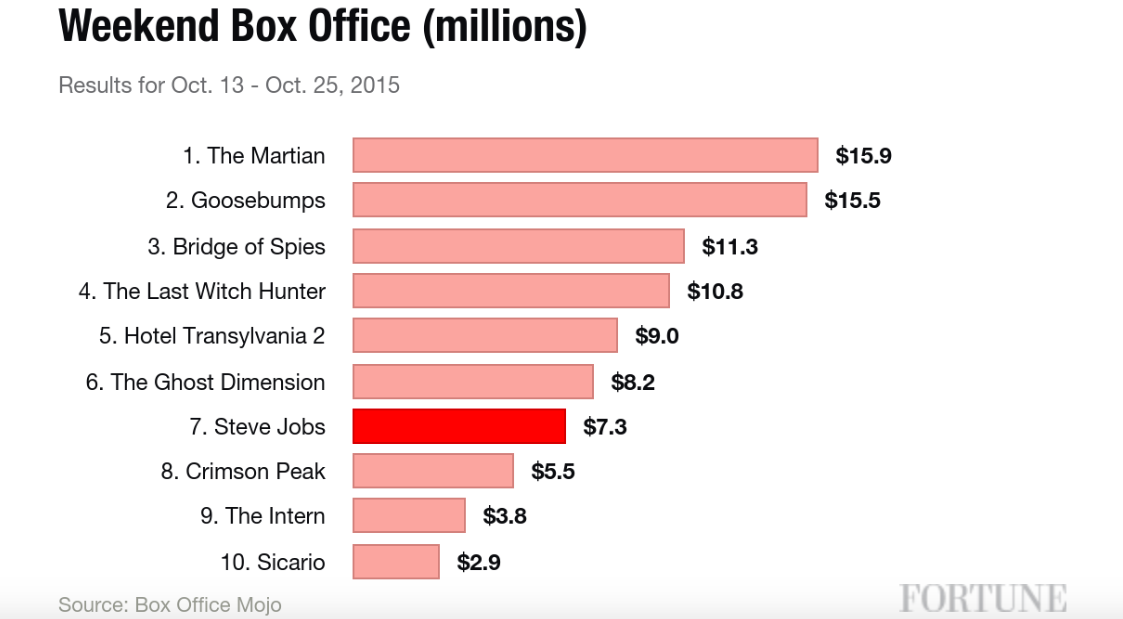 Expectations were high for the nationwide opening of the new Steve Jobs movie last weekend.

Its limited release in New York and Los Angeles two weeks ago set a pre-theater release record, the 15th highest in history. It was No. 1 on Rotten Tomato’s most-wanted-to-see list. The reviews were rapturous. The star, Michael Fassbender, was being talked up as an Oscar contender.

But when it opened Friday night in 2,493 theaters across the U.S., Americans voted with their feet. Theaters in Silicon Valley, San Francisco, Seattle and Austin were packed. But in the rest of the country there were more empty seats than full. The weekend take in some theaters was less than $1,000.

The headlines in the Hollywood trade press were brutal.

I think that last one might be closest to the mark. There are other factors, of course: The lack of a proven box office star and competition from The Martian and Bridge of Spies—two other movies pitched for sophisticated audiences. There were also widely published complaints from Apple (AAPL) executives and reporters (who knew the real Steve Jobs) that Aaron Sorkin’s portrayal of the entrepreneur was more fantasy than fact.

Because of Sorkin’s involvement, comparisons were invariably made to his previous film, The Social Network, which drew critical raves and a 3X larger opening ($22.4 million vs. $7.3 million). But as Variety‘s Lang points out, the comparisons are faulty.

“The Social Network benefited from arriving just as Facebook was becoming ubiquitous. In 2010, it opened as everyone was discovering the thrill of over-sharing vacation pictures and political screeds. Even as it hit the zeitgeist, Facebook (FB) founder Mark Zuckerberg remained largely unknown to the general public. The story of the social media platform’s litigious origins had the shock of new.

“In contrast, Jobs, his genius for design and demanding personality, have all been thoroughly picked over. There’s the Walter Isaacson biography that formed the basis for the Sorkin picture, the Kutcher biopic, and endless profiles and think pieces. Steve Jobs is many things, but he is not an unknown commodity.”

Universal, which picked up the movie after Sony lost interest, believes it can rebound.

For more on Steve Jobs, check out the following Fortune video: