Look. Apple doesn’t obey the ‘law of large numbers.’ No company does. 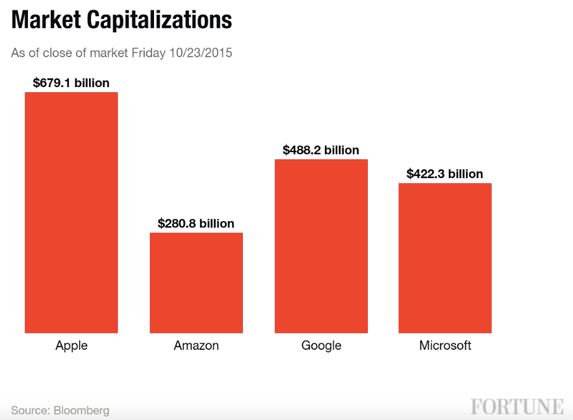 The market’s reaction Friday to the latest earnings results from Google, Amazon and Microsoft (read Fortune’s coverage here, here and here) got reader Carl Lambert—who posts here as RadarTheKat—thinking about the “law of large numbers,” one of the most abused phrases in business journalism. (See below.)

“Here’s the article I wish someone would write,” he says. And then he proceeded to write it:

“Among the arguments why Apple shares cannot outperform the market or its peers has been the oft repeated law of large numbers; the claim that Apple is too big to meaningfully grow and that its market cap, at nearly $680 billion, is so big that there aren’t enough investment dollars to move the needle.

“But last night the market unwittingly provided an irrefutable counter argument by taking the combined market caps of Google, Amazon and Microsoft to nearly $1.2 trillion. The market seems to have no trouble adding $70 billion to these three companies, whose combined profits are a fraction of Apple’s, but won’t allow the same for a single company.

“It was Microsoft’s year 2000 valuation, north of $600 billion at the peak of the dotcom bubble and stagnant for the decade thereafter, that has since been used as the poster child for what happens to the company with the world’s highest market cap. The street is convinced that will be Apple’s fate.

“What the market doesn’t seem to understand is that vertically integrated Apple, in terms of the profits it generates and markets it addresses, is equivalent to the entire PC industry of the 1990s, including Microsoft, Sony, Toshiba, IBM’s PC division, Compaq, HP, and all the other PC makers. Adjusted for inflation, Microsoft’s year 2000 valuation alone would today be $850 billion, against Apple’s current $680 billion. How much higher when you add in all the PC makers from 2000?

“Apple’s market cap, given the scope of its business, and adjusted for inflation, is very conservative. As usual, the market is wrong.”

I last wrote about the so-called “law of large numbers” a few years ago when I caught James B. Stewart, a Pulitzer-prize winning professor of business journalism at Columbia University, invoking it in the New York Times as a pseudo-mathematical explanation of why Apple, as of February 2012, had peaked. At the time I wrote:

“For the record, the law of large numbers—once shortened to “LOL numbers” (as in ‘laugh out loud’) by a wag in our comment stream, was first formulated in the 16th century and proven by Jacob Bernoulli in 1713. It states that the probability of an experiment—the average roll of a die, say—achieving the expected result increases the more times the experiment is performed. It has absolutely nothing to do with how big a company has grown.”

There ought to be a phrase for the self-evident truth that any company that’s growing faster than the economy as a whole can’t do so forever because eventually it would have to become larger than the economy it’s part of. But the law of large numbers is not it. And Apple may turn out not to be its poster child.