Apple lost share in U.S. ahead of iPhone 6S, but gained in China 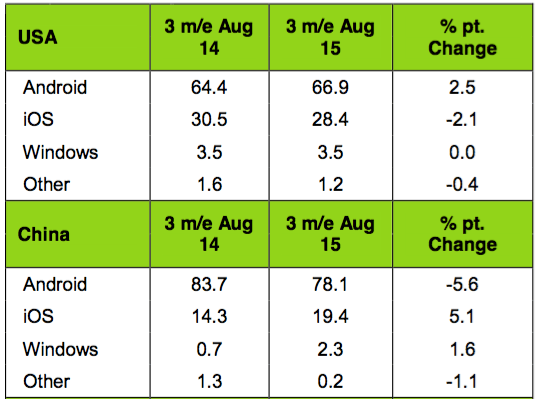 The iPhone’s share of U.S. sales in August fell 2.1% to hit its lowest point in a year, according to results released Monday by Kantar Worldpanel Comtech‘s closely watched survey.

That’s not a big surprise, given that iPhone models are usually refreshed in September.

“It is to be expected that in the three months preceding the launch of the new products, Apple iPhone sales would be weaker,” said Carolina Milanesi, Kantar’s chief of research.

But that doesn’t explain why Apple’s share increased 5.1% in urban China during those same three months.

According to Tamsin Timpson at Kantar Worldpanel ComTech Asia, last year’s iPhone models topped China’s bestseller lists, with buyers mentioning the clarity and resolution of the screen (58%), the quality of the camera (54%), and the size of the screen (51%).

Meanwhile, in Europe, Google’s Android slipped into an even deeper slump, with share of sales falling in Germany, Great Britain and France.

“Android continues to struggle,” said Dominic Sunnebo, director of Kantar’s European unit, noting that the only countries registering year-over-year growth for Android were the heavily prepaid markets of Italy and Spain, where buyers favor cheaper phones.

Apple is scheduled to release its official quarterly sales numbers next week.