Theranos’ Elizabeth Holmes calls on women to help each other 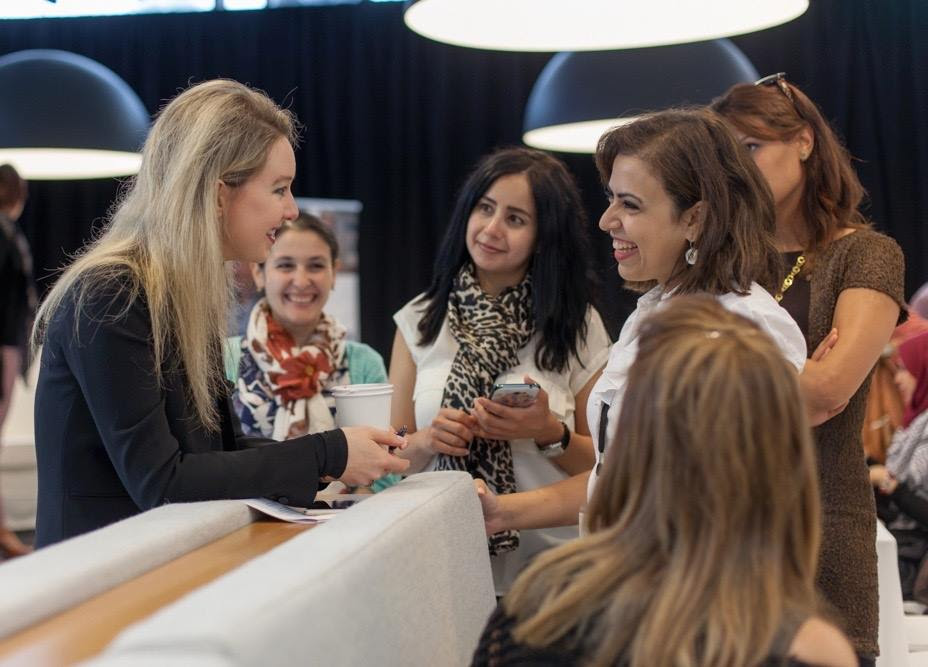 Elizabeth Holmes, the CEO of diagnostics company Theranos, is used to being the lone woman in the room. She was the only female chemical engineering student in her undergrad class at Stanford University and is the only female CEO in the so-called “Decacorn Club” (startups with valuations of $10 billion or more). She is even the lone woman at her very own board meetings.

This last Saturday, though, the much-buzzed-about chief executive, profiled in Fortune in 2014, was part of the majority. At an event hosted at Theranos’ Palo Alto, Calif.-based headquarters, Holmes mingled with nearly 100 young, female leaders who were in town for the U.S. Department of State’s TechWomen initiative. The five-week-long program combines tech- and science-focused mentoring sessions, professional development workshops and networking events for selected women from the Middle East, Africa and Central Asia. (The initiative is overseen by the Institute of International Education, the same non-profit organization that administers the Fulbright Program.)

Holmes, who was recently picked by the White House as a Presidential Ambassador for Global Entrepreneurship, shied away from the public eye for years. But lately she seems to be more comfortable with her public image. At the TechWomen event, which included workshops and a guest appearance by investor Marc Andreessen, she used the spotlight to launch a new Twitter campaign, called #IronSisters, and to call on every woman in the room to commit to helping 100 other women upon return to their home countries.

Her inspiration? None other than the Iron Lady herself—one of Britain’s most polarizing figures, former Prime Minister Margaret Thatcher.

“Every time you see a glass ceiling there’s an ‘iron woman’ underneath it,” Holmes told the women in the room. “We’ve created a hashtag, and we’re going to start tweeting. And you all are my first 100 ‘Iron Sisters.'”

If the nearly 100 women at the TechWomen event buy into Holmes’ #IronSisters campaign, then it has the potential to reach upwards of 10,000 (just do the math). It’s an ambitious goal, and whether or not it takes off on social media (and, more importantly, in real life) remains to be seen. But Holmes has proven her steadfastness in the past. She started Theranos at the age of 19, after dropping out of Stanford in 2003.

Perhaps not so ironically then, the “iron” reference has been used to describe Holmes before. As one of her superstar board members, former Secretary of State Henry Kissinger, once told Fortune: “I can’t compare her to anyone else because I haven’t seen anyone with her special attributes. She has iron will, strong determination.”

Despite the current enthusiasm for Holmes’ company and its potential to revolutionize several key aspects of the healthcare industry (at scale, Theranos could impact pricing, early detection and even patients’ access to medical data), the entrepreneur did not have much help in the early days—especially from other women.

“I have spent the last 12 years working to build this 24/7—it’s all I do,” Holmes said in her address to the TechWomen audience. “What’s been so interesting to me as I’ve done it, is that there haven’t been women who have helped me in the context of building the company. We have an opportunity to change that and to show that we can build a new culture in which women help other women to be successful.”