Your next Comcast bill may be priced per gigabyte 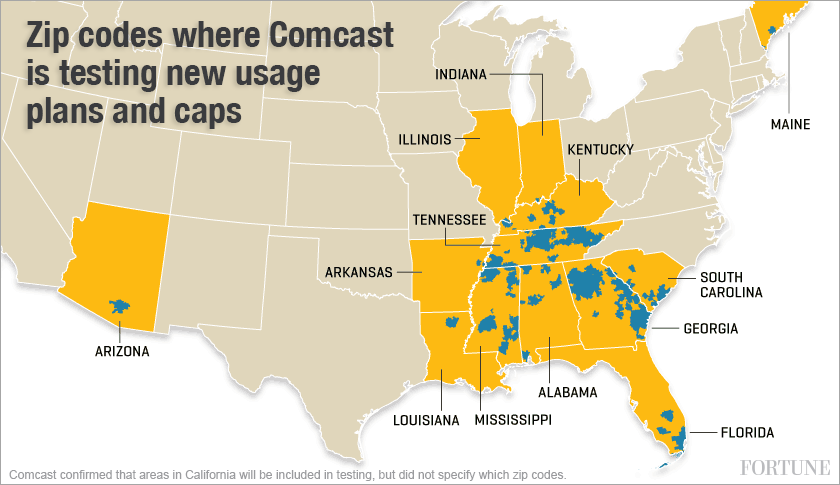 Beginning tomorrow, residents of Miami, Ft. Lauderdale, and the Florida Keys will become part of what feels like a never-ending experiment in pricing by America’s No. 1 broadband provider. Comcast plans to implement what it calls a new data usage trial. Everyone else calls it a data cap. Under the plan, customers who use more than 300 gigabytes of data in a month will pay $10 to buy 50 additional gigabytes or $30 for unlimited data use.

Comcast (CMCSA) is testing a variety of such plans across the country with a common goal—to bring the per-gigabyte pricing prevalent in wireless smartphone contracts to broadband Internet. Its rationale for such a move? To ensure that it can preserve its income as more customers drop classic cable TV service in favor of broadband Internet and the data-devouring TV services (known as “over the top” or “OTT”) from Netflix (NFLX), Hulu, Amazon (AMZN), Apple (AAPL), and others.

Rich Greenfield, managing director and media and technology analyst at BTIG, believes this is an important strategic move for Comcast. He also believes it’s one that Comcast rival Charter (CHTR), which is poised to merge with Time Warner Cable, is giving up on. “As video shifts to broadband, charging a premium for usage is critical, especially if [alternative video services from non pay TV providers] take off, spurred by Apple and others in 2016,” Greenfield says.

Comcast can maintain its revenue in several ways. It can increase the amount that people pay for broadband. It could also invest in over-the-top content of its own—a move that could complement or extend activities in its NBCUniversal division. (Earlier this month Hulu, in which Comcast owns a stake, began offering two tiers of Hulu Plus service: one without commercials for $14.99 per month and another with them for $7.99 per month.)

Comcast can also do its best to provide economic incentives for customers to maintain their cable television service (and therefore maintain its leverage when it negotiates with TV content providers). It’s certainly trying. In Florida, for example, the cost of a 75 Mbps (as in “megabits per second,” a measure of data download speed) standalone broadband package costs $80 per month but comes with a limit of 300 gigabytes per month—not unreachable for a family of four that streams Netflix or Hulu on a regular basis. (Overage costs $10 per 50 gigabytes.) Opting for the $30 unlimited option brings that monthly bill to $110—right between the $99 per month for a basic Comcast “triple play” bundle (voice, video, broadband) and a premium bundle with dozens more TV channels.

Faced with those options, buying broadband by itself seems like a bad deal. Even if you swim against that tide, consider: Standalone broadband (and voice delivered over it) is wildly profitable for cable companies. Analysts estimate the business enjoys gross margins of about 90%. And if that sends you running back to the bundle, just remember that those typically lock you into a two-year contract. (And you’d still pay an overage fee if you use more data than the plan allows for.)

Charlie Douglas, a Comcast spokesman, argues that its wireless-style plans aren’t a cap. A true cap, he argues, was what Comcast implemented in 2008 when it told users that if they used more than 250 gigabytes per month they would be first warned and then cut off from service. That plan ceased in May 2012. Comcast insists that its offering since then is better described as a “data usage plan.” “We don’t call it a cap,” Douglas says. “We call it a data plan just like wireless companies have data plans.”

Why would a company that has plenty of capacity on its network need a data plan? It’s not a matter of capacity, Douglas argues, but fairness. “Ten percent of our customers are consuming half of all of the data that runs on our network each month,” Douglas says. “So part of the rationale for all of these trials is this principle of fairness. Those who want to use more pay more, and those who want to use less pay less.”

Here’s the rub: Businesses don’t generally care about fairness; they care about profits. With its new pricing structures, Comcast sees a way to make money, says Matt Wood, a policy director at Free Press, a consumer advocacy organization in Washington D.C. “They just want to monetize their network in new and creative ways,” says Wood. “They are effectively charging people two or three times for the same usage when they impose a cap.” When Comcast charges customers more for a higher speed tier, he argues, it is charging them for using more data since increased data transfer speeds give them the ability to download more information over the network.

That is true. It would be almost impossible to, for example, reach a 300-gigabyte monthly cap using a 1 Mbps connection, which is only about one-tenth the speed of the average U.S. broadband connection of 11.7 Mbps, according to Akamai. But with a 100 Mbps connection, speedy enough to cost a premium, you could easily exceed the limit—and get charged for the overage. (According to Netflix, an hour of television in 4K resolution—the latest high-definition video standard—consumes 7 gigabytes per hour. That means you would exceed the cap after 43 hours of 4K TV.)

“A monthly limit on broadband is a good way to discourage people from using broadband, but it doesn’t help them pay for using the resource,” says Wood. “It is a way to penalize heavy users and discourage people from uses Comcast doesn’t like as much,” such as streaming video. The U.S. Government Accountability Office issued a report on the impact of data caps in Nov. 2014 and concluded that the FCC should keep an eye on the issue and that consumer education was needed.

Comcast has been testing wireless-style broadband plans for several years. In 2012, Comcast gave select users in Nashville a 300-gigabyte cap and charged $10 for every additional 50 gigabytes. The same year, it tried pairing larger caps with higher speed tiers (e.g. 105 Mbps speed and a 600-gigabyte cap) in Tucson, Ariz. It tested the opposite approach—low speeds, low caps, low cost—in Fresno, Calif. in 2013. It ceased launching new trials when it announced plans to merge with Time Warner Cable in February 2014. With that deal dashed, it has resumed nationwide testing.

According to Douglas, about 8% of Comcast’s users today consume more than 300 gigabytes of data per month. That share has quadrupled in two years’ time. The national median among Comcast customers is 40 gigabytes per month, he added, up significantly from between 16 gigabytes and 18 gigabytes two years ago and 20 times the amount observed seven years ago, when it first implemented a cap.

As for Florida, consider it only the latest step for Comcast, which plans to continue tinkering with different broadband plans across the U.S. Is this the beginning of the end for always-on, unmetered broadband Internet? Possibly—in which case we’ll look at the decade between 1998 and 2008 as the Internet’s Golden Age, a time when companies like Skype, Facebook, Google, Netflix, Spotify and others came into being because of an economic anomaly that was all too brief.

For more on Comcast, watch this episode of Fortune Live: