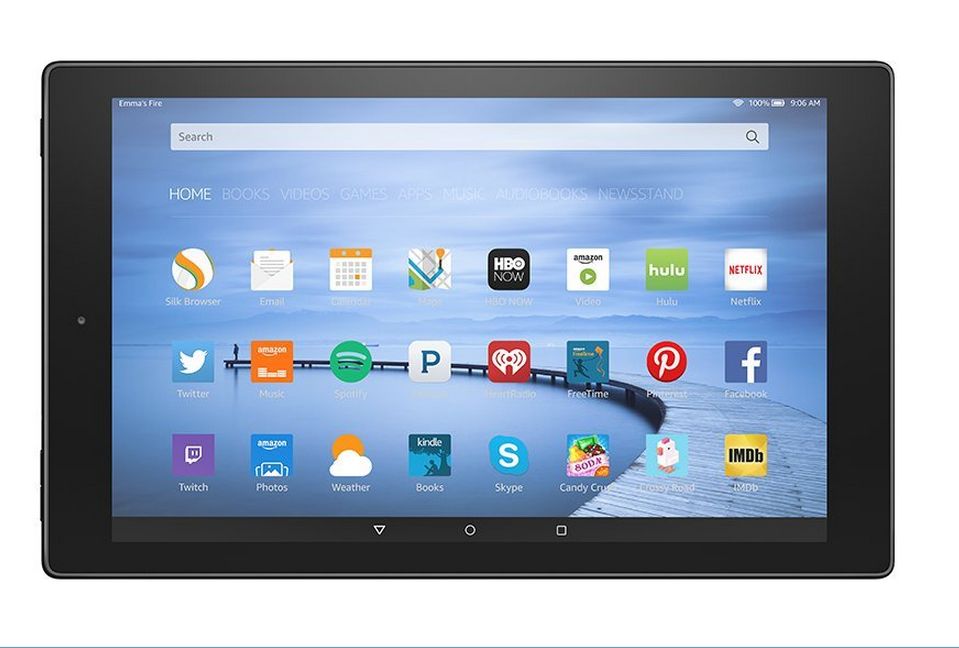 For anyone in the market for a 10-inch tablet—one that can sling media and perhaps even pull occasional laptop duty—Amazon’s new Fire HD 10 demands consideration.

The reality, however, is that not everything about the Fire HD 10 is really comparable to those Apple (AAPL) and Samsung (SSNLF) models. In crafting a low-cost tablet, Amazon (AMZN) has elected not to compete in two key areas: performance and screen resolution. Depending on your intended plans for the device, those low-end efforts may sabotage your fun.

True to its name, the Fire HD 10 boasts a 10.1-inch display, giving you a little more real estate than the 9.7-inch Air and Galaxy Tab. Understandably, it’s also a bit heavier and thicker, weighing in at just over 15 ounces and measuring 10.3 x 6.3 x 0.3 inches. The tablet comes in black or white, and (like most of Amazon’s models) displays unobtrusive ads on its lock screen. (You can pay an extra $15 at the time of purchase to remove this “feature,” but the ads are so fleeting—you see them for all of a second before your swipe unlocks the screen—it’s money poorly spent.)

Unfortunately, that big screen is also the Fire HD’s biggest drawback. With a resolution of just 1,280 x 800 and pixel density of 149 pixels per inch, the tablet simply can’t render the kind of razor-sharp text most of us are now accustomed to from our mobile screens. Books, magazines, Web pages, and the like all exhibit a noticeable fuzziness. Ironically, this is one case where bigger isn’t better: Amazon’s 8-inch Fire HD 8 has the same resolution, but the smaller screen raises the pixel density to 189, thus making text easier on the eyes.

This is not to say the HD 10’s screen is unacceptable, merely that it’s not ideal for reading. Thankfully, it’s a bright and colorful display, and the low resolution and pixel density don’t have such a negative impact on games, videos, and other visual media. In fact, the tablet’s unusually wide form-factor—it has a 16:10 aspect ratio—makes it well-suited for movies and TV shows. High-definition titles play nearly full-screen, without the thick black letterbox bars you see in tablets with 4:3 aspect ratios.

As for performance, despite the inclusion of a quad-core processor, I found the Fire HD 10 to be sluggish. Amazon’s own Washington Post app took 10-15 seconds to load, and I sporadically experienced long load times in Amazon’s Silk Web browser as well. When you tap in a text field, the keyboard often takes several seconds to appear. It’s experiences like this that can make the tablet aggravating to use.

These performance problems are really a shame, because the tablet has a lot of other things going for it: decent front- and rear-facing cameras, a microSD expansion slot for adding more storage (a first for Amazon tablets), Dolby-enhanced stereo speakers that sound surprisingly good, and (perhaps best of all) Amazon’s rich ecosystem of music, movies, books, games, and more. You can buy or rent most items, but subscribers to Amazon Prime ($99 annually) get unlimited access to tons of content—including movies and TV shows that can be downloaded for offline viewing. Even non-subscribers get access to Amazon Underground, a collection of free apps and games the company says is valued at over $10,000.

For those with thoughts of productivity, Amazon offers a $100 Fire HD 10 keyboard case. I wasn’t provided one for review, but the tablet itself is wide enough that the keyboard is able to supply full-size keys, an important consideration. You could definitely get some word processing done, but the low screen resolution would make detailed spreadsheet work more challenging. The same is true for consuming PDFs, which would require a lot of zooming and panning. The Fire HD 10 could pull business duty in a pinch, but it’s really not designed for that type of work.

Instead, this tablet is best suited for watching videos and playing games. If you prefer a big screen for those activities, you’ll no doubt appreciate Amazon’s budget-friendly price tag. However, the Fire HD 10’s middling performance and low-resolution screen serve as stark reminders that you get what you pay for. Anyone shopping for a more useful tablet may want to pay a bit more.