Welcome to the Church of Apple 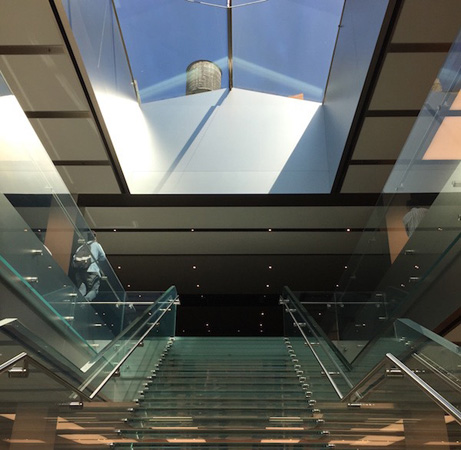 “People have used technology for a long time to speak to the gods,” says Erica Robles-Anderson, an assistant professor at New York University, riffing on the old cult-of-Apple meme for Atlas Obscura.

Robles-Anderson is being led on a tour of Gotham’s Apple Stores as the faithful gather on iPhone release day, or what staff writer Sarah Laskow, calls the Feast of Jobs.

At NYU, Robles-Anderson teaches a course called Architecture as Media. At the SoHo Apple Store, she is drawn to architectural elements borrowed from ancient temples and churches.

On the portal to the street:

“The oversized doors are fantastic,” says Robles-Anderson. “There’s no reason for them.” They’re there only to communicate that this place is important. Also, they’re heavy, like church doors, to give purpose and portent to the entry into the space.

On the Soho store’s central staircase:

This is an old, old trick. “It’s used in ziggurats, even,” Robles-Anderson says. “It creates a space that emphasizes your smallness when you walk in. You look at something far away, and that makes your body feel like you’re entering somewhere sacred or holy.”

On the lack of lines at Samsung’s store:

The problem wasn’t just a lack of PR. “It was a deep misunderstanding about special access, as opposed to what Apple has built, which is the feeling of being in it together, as though you were fighting something,” Robles-Anderson says, “even though it’s the most valuable company in the world.”