This is bad news for people who spend millions on art 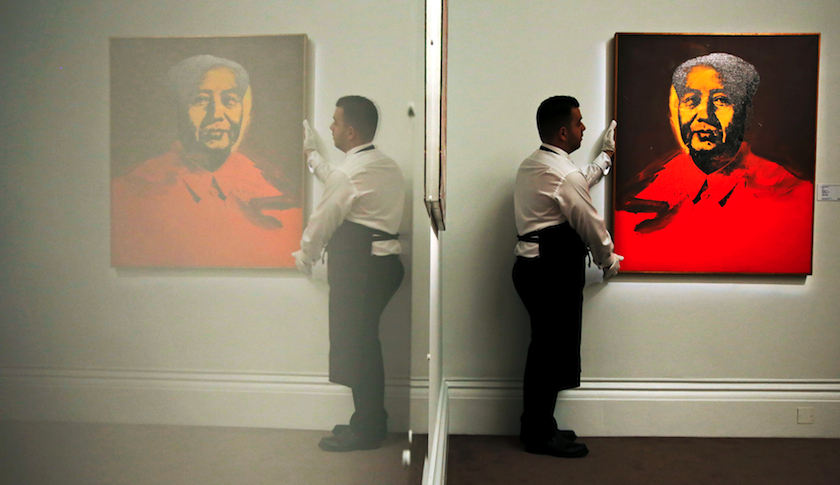 “Art is about life and the art world is about money,” Damien Hirst famously said. And with the European Fine Art Foundation estimating $57.3 billion in global art sales last year, his observation has never rung more true. But as art prices soar, ensuring the authenticity of one’s artwork (read: its value) is becoming an increasingly muddled and costly affair.

Four years ago, the Andy Warhol Foundation dissolved its authentication board, the official arbiter holding sway over which works are certified as those of the artist’s and those that are not. Embroiled in a series of lawsuits after rejecting the validity of questionable pieces, Red Self-Portrait (1965) among them, the board decided it could no longer bear the financial toll of continuously defending itself against disgruntled collectors, even though they had signed agreements in advance, binding them to the board’s decisions.

“One year our legal bill ran up $7 million,” says Joel Wachs, the foundation’s director. “The cost to defend them became so great, we got tired of giving money to lawyers. We’d rather be giving it to artists.” So after 16 years and some 6,000 works examined, the Warhol board closed its doors.

Like a giant silk-screen domino, the news set off a chain reaction within the small, elite world of authentication boards. Since then, a number of artists’ estates and foundations—including those representing Keith Haring, Jean-Michel Basquiat, Roy Lichtenstein, and Jackson Pollock—have also chosen to disband, unwilling to open themselves up to further legal entanglements.

Take the recent case of the 17th-century painting, The Cardsharps. Sold at Sotheby’s in 2006 for £42,000, the auction house had declared the work to be by one of Caravaggio’s followers. However, the purchaser (a collector and baroque art historian) claimed the painting to be an authentic Caravaggio and valued it at £10 million, propelling its previous owner to sue Sotheby’s for failing to offer up the same deduction before the sale. In January, a British judge ruled in favor of Sotheby’s, saying that the auction house had done its due diligence.

The stakes are undeniably high because the prices for art are stratospheric. This year a private sale of Paul Gauguin’s 1892 portrait Nafea Faa Ipoipo was brokered for a reported $300 million to the Qatari royal family, while Picasso’s Les femmes d’Alger (Version “O”), painted in 1955, sold for $179 million at Christie’s. Authentication provides scholarship and a measure of security for an owner—without it, few, including the major auction houses will touch a piece of art. While such a stamp of approval can bump the value of a napkin doodle into the tens of thousands of dollars, a hoped-for canvas masterpiece thought to be worth millions can just as easily be rendered worthless.

Since the Warhol board shuttered, the artist’s prices have skyrocketed. Last year, Warhol’s Triple Elvis (1963) fetched a whopping $82 million at Christie’s. “I’m not surprised,” says Todd Levin, director of Levin Art Group, a private advisory company. With the board shutting down, Levin says, “either a work has authentication or not, and nothing else can be added to the catalogue raisonné [the scholarly compilation of all known works by an artist], and that has given confidence to the market.” At the same time, the winnowing of authoritative bodies has meant that the gray area for uncertified works or those pieces yet to be included in an artist’s catalogue raisonné or recognized through scholarship, or provenance, has become even grayer

In response, some living artists such as Sterling Ruby and Ed Ruscha have taken to the Internet, putting up digital archives of their work; others have begun preserving their legacies by putting together their own catalogue raisonnés—something that has traditionally been done posthumously.

The increasingly litigious climate that has forced authentication boards out of the game has also created a muzzling effect on independent experts and historians who worry that giving their opinions will get them sued. Donn Zaretsky, a New York lawyer specializing in art, says he knows of one expert who is too afraid to reach out to a museum that is exhibiting a work he believes to be inauthentic because he fears legal retribution. “I’ve seen several examples of that,” he says.

This fearful reticence has even invaded the world of scholarship. In 2012 a London conference focusing on the authenticity of Francis Bacon’s works was cancelled in part over the legal ramifications of its participants expressing their opinions on the record. Similarly, an ongoing challenge over the authenticity of casts reportedly made from sculptures by Edgar Degas remains in limbo, as scholars are hesitant to render a judgment for fear of legal action.

Without a functioning mechanism to address authenticity, many art insiders say the door has opened to more forgeries floating around the market. “Every day I hear another story about fakes,” says Peter Stern, an art lawyer at McLaughlin & Stern. “I can’t even keep track of them.” Among the many reports that have surfaced this year: In July a French art dealer was charged with selling fake Chagalls; and in March, Spanish authorities busted a forgery ring, seizing nearly 300 fake Picassos, Warhols, and Mirós. Countless other copies have yet to see the light of day.

One of the most egregious episodes to date occurred at the legendary Manhattan gallery Knoedler & Co., which closed in 2011 and was sued three years later, along with its former director Ann Freedman, after accusations that it sold a number of “previously unknown” Rothkos, Pollocks, and other works that were actually knockoffs allegedly churned out by a Chinese immigrant in Queens. In August, the now-defunct gallery and Freedman reportedly had settled three of 10 buyer lawsuits stemming from the case. “There is a school of thought that the Knoedler mess could have been avoided if people were not afraid to speak up,” says Zaretsky.

In June, the New York State Senate passed a bill to protect art experts making good faith judgments against lawsuits that it said are “meritless” and “expensive and frivolous.” The measure is expected to go before a vote in the assembly next year. While some industry watchers see the effort as a hopeful sign forward, others believe its impact will be negligible. Besides its narrow geographic scope, one of the bill’s original mandates that would allow specialists to recoup legal costs from plaintiffs has since been downgraded to a judge’s discretion.

“This legislation is very watered down,” says Wachs, and while it may hinder spurious lawsuits, “It will not solve the problem by any means.” In other words, when it comes to art, as always: Caveat emptor.