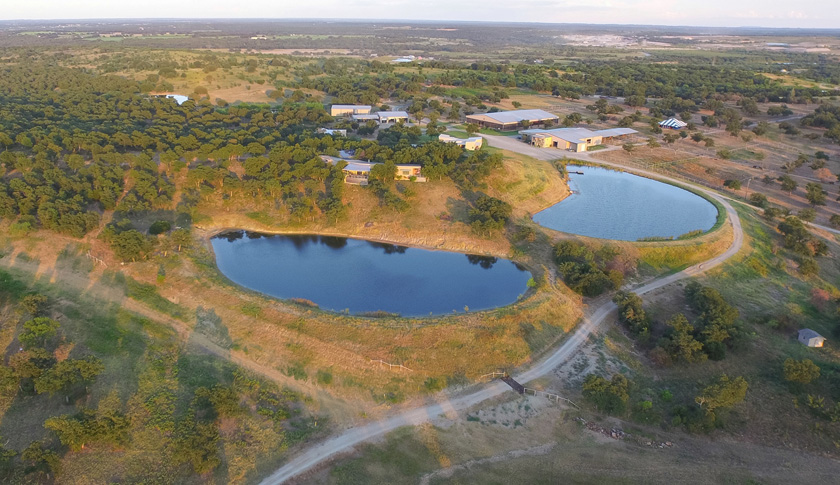 If you’ve ever wanted to live the life of a rancher, now is your chance. Alice Walton, a billionaire heiress to the Wal-Mart fortune, is selling two Texas ranches with a total of 5,872 acres of gorgeous scenery, extensive river frontage, buildings, and the ability to keep oil and gas drillers off the properties, if you want. All you need to is pony up $19.8 million for a high-profile working horse ranch, and another $28.7 million for a secluded and expansive getaway. Total tab: $48.5 million.

The 65-year-old Walton is a daughter of Wal-Mart founder Sam. She and her family own about 50% of the retail behemoth. Alice Walton alone is worth an estimated $31 billion and is one of the world’s richest people.

Alice Walton also is reputed to be one of the top cutting horse breeders in the country. But Walton said she wanted to focus on the Crystal Bridges Museum of American Art that she founded four years ago in in Bentonville, Arkansas, the headquarters of Wal-Mart. According to the Dallas Morning News, Walton has a $500 million art collection housed at the Crystal Bridges Museum of America. “I’ve been stretched in too many directions and I want to get focused,” Walton said, in explaining her decision to sell.

She is selling the 1,456-acre Rocking W Ranch — “one of Texas’s most iconic,” according to Williams Trew, one of the two real estate brokerages handling the sale — 45 miles west of Fort Worth for $19,750,000. (Sorry, the horses, tack, and equipment are separate.) Walton will still be in the general area, though, as she owns a home Fort Worth.

There is a three-bedroom contemporary house that is 4,100 sq. ft., including a library and main gallery, according to the Williams Trew listing. Venetian plaster walls, mesquite floors, sycamore and cherry cabinets, and a home automation system combine Western culture, style, and high tech convenience for a “state of the art” and “comfortable” residence that is an “ideal spot” for outdoor enthusiasts. The building sits on a hill with spectacular views, particularly from the large covered deck at sunset, surrounded by mature oak trees.

There are additional guest and staff residences and extensive paved roads on the property. More than 250 acres of coastal Bermuda pasture offer hay for cattle and horses. The ranch comes with hay and equipment barns and a 24-stall horse barn, with an outdoor arena. There is “excellent wildlife habitat” and close to a mile of Brazos River frontage, according to McAllen Coalson, a broker at Coalson Real Estate, the other brokerage handling the sale.

Back deck view at sunsetCourtesy of Williams Trew

A retreat on the Brazos River

The other ranch, unnamed and largely ignored in most reports about the property sale, comes with 4,416 acres and 8.5 miles of frontage on the Brazos River, southeast of Possum Kingdom Lake, a popular weekend recreational destination, according to Coalson. The second property has a 4,346 sq. ft. lodge, built in 2005, with 3 bedrooms and 3 baths, with a sauna in the master bath.

“Significant” mineral and water rights are available for both properties, according to Coalson. “[Mineral rights, which include] oil and gas rights are very important because you have more control over the surface [of the property],” he said to Fortune. In other words, no one else yet owns the rights to drill for and pump oil and gas, which involves large and ugly equipment left on the groups. And the water rights “are unheard of,” because they give the owners the opportunity to pump water from the Brazos River, even during dry spells.

The properties were put on the market less than two weeks ago. Coalson said that normally a property like either of these could take one to two years to sell, but given all the publicity the sale is getting, “I expect it to be half that time.”

According to global real estate firm Savills Studley, U.S. residential property has become a hot investment commodity. “A lot of other countries and cities around the world have seen a lot of growth,” Yolande Barnes, director of Savills World Research, told Fortune. However, prices in the U.S. have been stable and lower. “These sorts of country estates, country properties, are still looking relatively cheap at a global level.”

But the buy ultimately is still likely to be someone from the United States. “Rural real estate has been less attractive to the new wave of money coming out of Asia,” Barnes said.