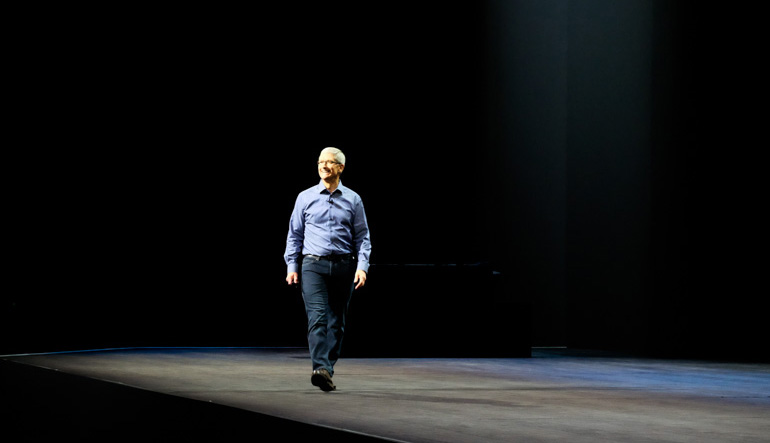 Excerpts from the notes we’ve seen. More as they come in.

Katy Huberty, Morgan Stanley: New iPhone Upgrade Program the Positive Surprise. “The two most important takeaways from Apple’s event are: 1) the iPhone upgrade cycle may be shortening, not lengthening – an argument for continued growth, and 2) it’s not all about the iPhone – at least to Apple – as they updated four product lines today. Overweight. $155.

Jim Suva, Citigroup: Regarding the iPad Pro. ”Available in November, the iPad Pro will boast a 12.9″ screen with 5.6 MP. The company also considers the device more powerful than any existing iOS device, faster than 80 percent of PCs shipped in the past six months, with graphics faster than 90% of those PCs.” Buy. $145

Avi Silver, CLSA: May the Force Touch be with you. “There were 4 interesting takeaways from Apple’s launch event. First, we believe Apple’s new iPhone upgrade program could drive replacement activity and ultimately allow it to seize more control of the customer from the carriers. Second, Apple did a good job highlighting the benefits of 3D Touch, including ‘Peek and Pop’ and ‘Quick Action’ features that seem intuitive and convenient. It’s not that the masses will upgrade from the 6 to the 6S for this feature, but instead differentiates Apple’s user interface and makes its platform stickier. Third, Apple’s approach to the TV market continues to evolve as the company is hoping that Apps will dominate TV viewing experiences similar to smartphones/tablets. The integration of Siri into the TV environment with filtering search options plays right into this. Fourth, the iPad Pro is a niche device with a hefty price tag that probably won’t sell more than 4-5m units per year.” Buy. $150.

Gene Munster, Piper Jaffray: iPhone 6S Enough For Upside To Street Units. “Today’s Apple announcements on the iPhone 6S, new Apple TV and iPad Pro were largely as expected. That said, we believe there is substance in the new products, most notably that the iPhone 6S should have enough appeal, along with the lower price for existing iPhone 6 and Plus, to allow Apple to continue to gain share at the high end of the phone market. We are expecting 4% y/y iPhone unit growth vs. the Street at flat in 2016. Updates to Apple TV should add a little less than 1% to Street estimates in 2016 (not in our model). Finally, the new iPad Pro is incremental but does not change our belief that iPad units will be down 4% in 2016.” Overweight, $172.

Abhey Lamba, Mizuho: New Products Seem Inline With Expectations. “The product announcements were largely inline with speculation and did not seem like they could drive meaningful revenue growth. Although a slightly delayed launch of iPhone 6S (vs iPhone 6 last year) could help its unit growth in the Dec quarter. We remain concerned about tough iPhone compares for the next few quarters, which will likely keep weighing on the stock performance.” Neutral. $125.

Daniel Ives, FBR: Refueling the Growth Tank for FY16. “We think the Street will be laser focused on if these iterative improvements in the 6s can spur a surge of upgrades (e.g., Force Touch, A9 system-on-chip, 12-megapixel camera, 7000 series aluminum chassis) across the Apple customer base. With less than 30% of customers upgrading to iPhone 6 to date, coupled by this innovative 6s model, we believe the stage is set for Apple to catalyze growth on the heels of this super-cycle product upgrade for the coming quarters and thus help reverse the negative investor tide (e.g. China) hovering over this “prove me” name. We also believe the iPad Pro is a potential door opener for Apple on the enterprise front that could revitalize growth on this all- important tablet market opportunity as Cook & Co. now focus on cracking the enterprise nut with this new and improved larger iPad. Outperform. $175.

Sundeep Bajikar, Jeffries: Apple is in Transition. The Smartphone market is maturing, Android capabilities are just as good if not better than iOS, and competition from China is intensifying, while Samsung is focused on differentiation with flexible display. Meanwhile Google is extending its lead in Cloud Services and advancing its technology for self-driving Cars. To extend its brand advantage, particularly in China, Apple needs to introduce new categories of products/services, a process that Apple has begun with the Watch, Apple Pay, and iPad Pro. Lower iPhone hype/expectations combined with new offerings would make AAPL stock more attractive to us. Hold. $126.

Aaron Rakers, Stifel: As Expected iPhone & iPad Intros; Apple TV = Most Interesting. “Although we believe Apple’s iPhone 6s / 6s Plus feature / functionality updates again highlight Apple’s ability to leverage the competitive advantages of vertical integration, we would expect most to consider the company’s new product launch to be an as-expected event… New Apple TV is built on Apple’s vision that the future of TV is based on apps. With new tvOS, including search integration with third party content provider apps (HBO, Hulu, Netflix, etc.), Apple continues to highlight the ability to extend the reach of its iOS/OS X ecosystem—we believe leaving investors to continually question when Apple will move into OTT video subscription services.” Buy. $150.

Keith Backman, BMO: Staying in the Lead. “We thought Apple’s event was a positive given that Apple continues to drive sustainable competitive positioning through technology innovation, not price. For example, as we contemplated the launch of Apple’s larger-screen iPad over the past year, our fear was that Apple would simply announce a large-screen product. However, we believe that Apple brought new technology to the market that will matter to a segment of professional users, particularly creative users. We were surprised about the Apple Pencil, as Steve Jobs more than once lambasted the concept, but we believe the Pencil will have high utility to the intended user base. While we believe that the relatively high price of the iPad Pro will limit the unit impact, we nevertheless believe sales will largely be incremental to our forecast.” Outperform. $145.

Edward Yruma, KeyBanc; Apparel, Accessories & Luxury Goods. “Today, AAPL announced that it would offer an Hermes version of its Apple Watch (band and watch face). We believe that this move is significant because it pairs what we view as the preeminent luxury company (which already has a strong watch business) and Apple. One of our lingering concerns about the existing fashion watch business is that lifestyle brands would access the smartwatch business not by offering a fully featured branded watch, but via accessories. This validates this framework, and potentially opens the door for other lifestyle brands to work directly with Apple. This is an unquantifiable but clear negative to our existing fashion watch coverage.”

Arvind Bhatia, Sterne Agee: The new Apple TV could be incremental to the video games ecosystem. “While many of the existing mobile gaming apps will undoubtedly be ported over to the new Apple TV OS, a new killer app (i.e., its Angry Birds moment) would likely be needed for wider adoption. The new platform will need to establish its use case as a unique home-based platform as opposed to just an extension of mobile games on TV.

Al Hilwa, IDC: Apple Finally moves on TV. “The Apple announcement seems to have been widely panned in the media is not bringing something new. It is definitely a round of upgrades and double-downs, but unleashing Apple’s huge ecosystem of developers to TVs should not be under-estimated. To be sure, this is what most of us thought Apple TV was going to be 3 years ago. Perhaps what was missing is the interaction model, which Apple is now taking a stand on with the bundled TV remote and the connectivity. Apple TV has all the hallmarks of being a potential disrupter in lightweight gaming and likely one of the biggest categories of apps will be games. This is an important way for Apple to extend the value of its ecosystem to new form factors and keep its users in the fold.”

Frank Gillett, Forrester Research: “Apple’s iPad Pro presents an alternative vision of what a tablet or a portable PC is. At more than $900 it is no threat to mainstream Windows convertible tablets or laptops, which usually sell for less. But the incredible MultiTouch, 5k display, dynamically reconfiguring stereo speakers, and sensitive Apple Pencil set a new bar for a creative, high end personal device, and will blur the line between tablet and laptop. And it joins the Microsoft Surface Pro as an alternative vision of a personal portable computing device for creatives and professionals… Despite identical exteriors, Apple’s updated iPhones for 2015 have added enough new features to keep Apple on top of the smartphone heap. The 3D Touch and Taptic feedback will reset the expectations of smartphone owners for how touch devices work—but they’ll be confused by the differences between iPhone and iPad Pro. With the improved cameras and Live Photo, Apple will have no trouble continuing it’s streak of smartphone leadership.”

John Gruber, Daring Fireball: “In terms of stagecraft, this event was really well-structured and edited. That’s in stark contrast to June’s WWDC keynote, which was, by Apple’s standards, a bit of a rambling mess. In hindsight, I think this year’s WWDC keynote was the worst Apple event in years, and perhaps the worst in the modern (post-NeXT reunification) Apple era. It was too long, had no flow between acts/segments, and the Apple Music segment was downright awkward and under-rehearsed.”