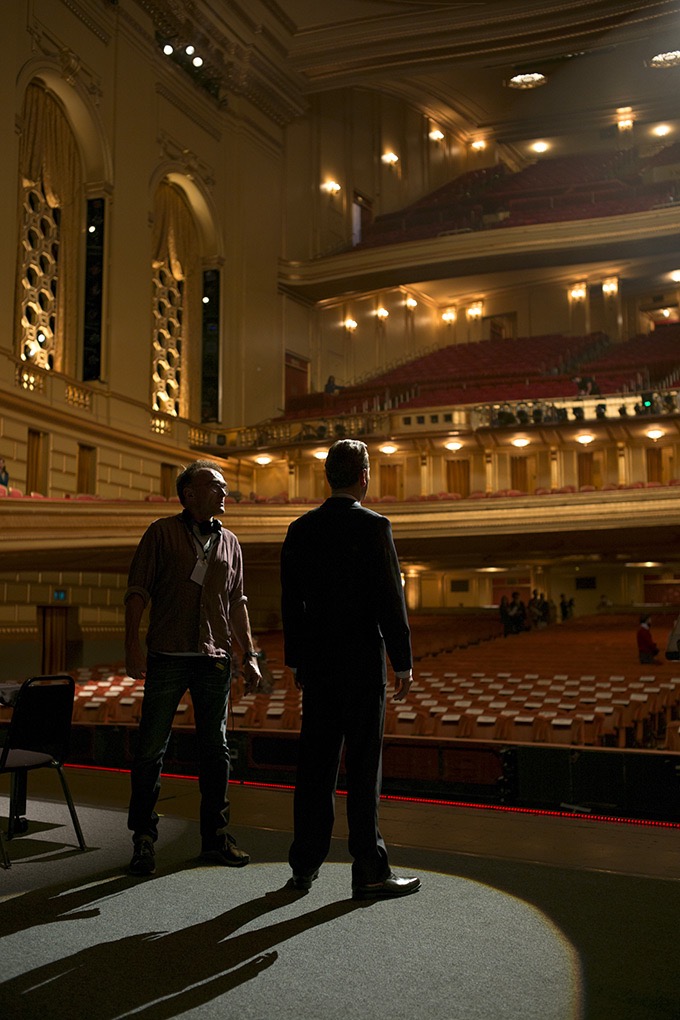 The top tier critics won’t comment on the Telluride screening of Universal Pictures’ “Steve Jobs.” They’ll hold their reviews for the week when their readership’s interest is highest, just before the film’s Oct. 9 nationwide release.

But the blogs, the trade press and the foreign reviewers didn’t hold back. And from what they’ve posted, it sounds like this much-anticipated, star-crossed film was worth the wait.

Samples of the reviews we’ve seen so far:

Todd McCarthy, Hollywood Reporter:”How do you get to the bottom of a character like Steve Jobs, a figure so towering and complex that he could arguably serve as the basis of a film as ambitious as Citizen Kane? If you’re a dramatist with the character insight and verbal dexterity of Aaron Sorkin, you make him the vortex of a swirling human hurricane, the puppetmaster who kept all around him on strings, the impresario of a circus dedicated to the creation and dramatic unveiling of technological wonders that changed the world. Racing in high gear from start to finish, Danny Boyle’s electric direction tempermentally complements Sorkin’s highly theatrical three-act study, which might one day be fascinating to experience in a staged setting. With its high-profile launches at the Telluride, New York and London film festivals, this Universal release is clearly positioned as one of the prestige titles of the fall season and will be high priority viewing for discerning audiences around the world.”

Justin Chang, Variety: “’Steve Jobs’ is a bravura backstage farce, a wildly creative fantasia in three acts in which every scene plays out as a real-time volley of insults and ideas—insisting, with sometimes gratingly repetitive sound and fury, that Jobs’ gift for innovation was perhaps inextricable from his capacity for cruelty. Straining like mad to be the “Citizen Kane” (or at least the “Birdman”) of larger-than-life techno-prophet biopics, this is a film of brash, swaggering artifice and monumental ego, a terrific actors’ showcase and an incorrigibly entertaining ride that looks set to be one of the fall’s early must-see attractions.”

Brooks Barnes, New York Times ArtsBeat: “As portrayed by Michael Fassbender, acting from a script written by Aaron Sorkin, Mr. Jobs is part genius and part monster, a man who seems to go out of his way to be cruel but who has a genius understanding of technology and marketing. Mr. Jobs’s initial refusal to acknowledge that he fathered a daughter is a primary story line. ‘We don’t have time to be polite,’ he snaps to a colleague at one point.”

David Ehrlich, Time Out: “Steve Jobs the movie is a lot like Steve Jobs the person: astonishingly brilliant whenever it’s not breaking your heart. Screenwriter Aaron Sorkin, who’s written about America’s Great Flawed Men with such fire and hyperarticulate pathos that he’s threatened to become one himself, outdoes his work on The Social Network with an even sharper and more savage script about a tech visionary whose genius threatens to corrupt his ethics.” 4/5

Fred Topel, Crave: “Steve Jobs is another crackling Aaron Sorkin script, complete with walk and talks. Instead of applying this banter to a linear series of events (or a direct adaptation of the Walter Isaacson biography), Sorkin structured the film in three major sequences that encapsulate the entirety of the man. It’s extraordinary, and Danny Boyle directs the hell out of it too.”

Gregory Ellwood, HitFix: “No disrespect, but at this point it goes without saying that Aaron Sorkin is simply an acquired taste. It’s hard to imagine a screenwriter in 2015 outside of Quentin Tarantino and Woody Allen whose style is so instantly recognizable. For Sorkin most of that notoriety comes from creating the classic TV series “The West Wing” or, more recently, the polarizing “The Newsroom.” He’s also, however, an Oscar winner for “The Social Network” and written acclaimed scripts for “A Few Good Men,” “The American President” and “Moneyball.” Sorkin specializes in an almost incessant intellectualized banter. It’s entertaining dialogue that can feel incredibly authentic one moment and arduously theatrical the next.”

Rodrigo Perez, The Playlist: “A deliriously quick-footed and orchestrally pitched character study, ‘Steve Jobs” is an ambitious, deeply captivating portrait of the high cost of genius. The Danny Boyle-directed “Steve Jobs’ is a dazzling showcase of the brilliant, multi-layered, and rat-a-tat delivery of screenwriter Aaron Sorkin. For all its dimensions of an iconoclastic, trailblazing thinker and digital revolutionary,“Steve Jobs’ is also a movie about fatherhood, absentee fathers, rejected children (Jobs was also adopted), and the price of committing yourself to a visionary way of thinking.”

Eric Kohn, IndieWire: “With the exception of Daniels, who does his best in the limited role of a gruff businessman (“the man who fired Steve Jobs,” in Sculley’s own words), the cast vanishes into their parts. Buried under makeup and a distinctive Polish accent, Winslet’s chameleonesque transformation is bested only by Fassbender, whose vivid expressions and constant movement turn him into a physical marvel. As Woz, Rogen could have easily devolved into the archetype of a bearded sidekick; instead, he’s a profoundly empathetic character passionate about cracking Jobs’ cold exterior.” B+

Alex Billington, Firstshowing.net: “This isn’t the story of ‘tech innovator’ Steve Jobs that we all know already. It’s something else entirely, an incredibly unique and brilliant creation that encapsulates decades of true stories and distills them down into one glorious three-act performance. An opera, or a Shakespearean play. And it’s a phenomenal performance, one for the ages. It’s a performance filled with an incredible ensemble, not a weak link anywhere, and some of the best dialogue and discussion you’ll ever hear. Thanks to Aaron Sorkin, one the finest screenwriters today, who crafts a beautiful script with so much depth in every single sentence. It’s almost overwhelming how much there is going on in every exchange, but it is so delightful to experience. This is one for the ages.”

Benjamin Lee, The Guardian: “There’s undeniable craftsmanship here, especially in Fassbender’s confident and transformative performance, but Sorkin’s script fails to shout and quip its way to anything approaching dramatic vibrancy. If you spent hours queuing up for the latest iPhone, this might prove masturbatory. For everyone else, you’ll remain a PC, and proudly so.”