This is my Apple-bashing nephew’s computer 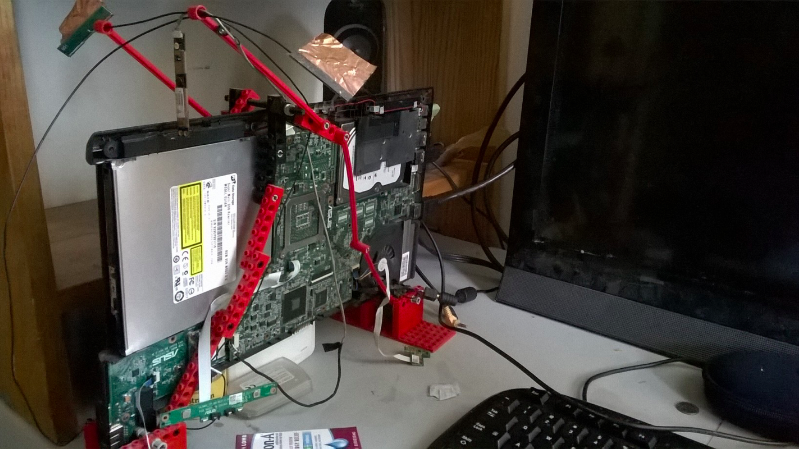 Like many Apple customers, I come from mixed family.

Nobody on my younger sister’s side uses Apple’s products, including my thirty-something nephew Andrew. Out of respect for me, I think, he doesn’t make a big deal about it at family gatherings. But he’s part of that computer-savvy demographic that despises nearly everything that comes out of Cupertino, especially its pretentious, over-priced, brain-damaged PCs.

What kind of computer does Drew use? I peeked into his bedroom the other day and found this Rube Goldberg contraption. I wondered what operating system it ran; I was pretty sure it wasn’t OS X.

It is running Linux, and very well.

It is the core of my mom’s former HP laptop that she quickly destroyed. Pretty much anything that isn’t a Mac or pre-Lenovo ThinkPad, my parents will destroy within 6 months.

After many spills and drops, the display would only work when in the perfect position, and the power plug junction was so fickle it was nearly impossible to keep it on, especially when used on an actual person’s lap.

I gutted it down to the main board and carefully took apart the display to remove the Wi-Fi antennas (the copper foils), the power buttons, etc. Then I re-soldered the power junction, built a makeshift frame out of Legos and repurposed it as a low-power thin desktop.

It is a far happier computer now. Any laptop with a screen over 13 inches is pointless; not worth the weight and footprint.

I keep meaning to build up the case with more Legos—give it more protection and add more Lego flair. I might mount the tiny power button chip into a Lego figure and a Lego computer brick, so when you press down on the brick, it turns on the machine. As if the little Lego guy is the captain of my PC, and I am his commander!

Ya, your nephew is a dork.”