The big business behind the local food 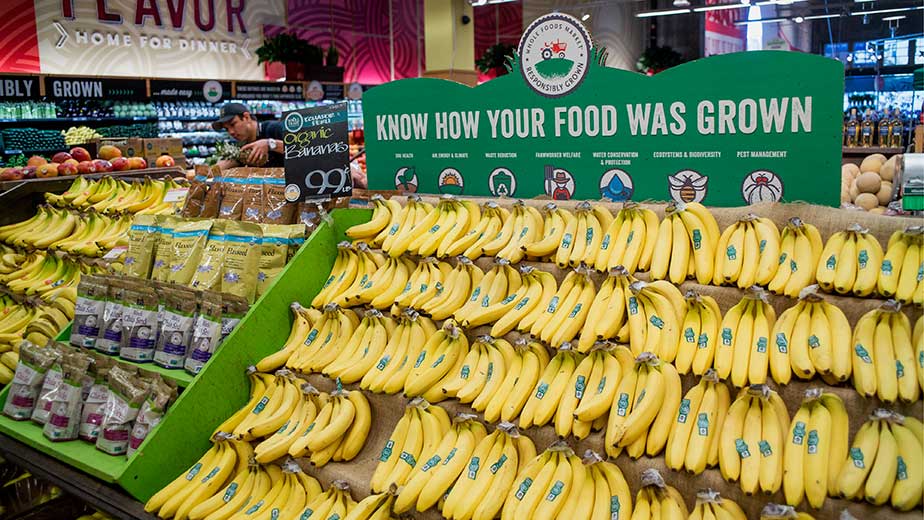 Consumers’ appetite for local foods is exploding. Overall, local foods generated $11.7 billion in sales in 2014, and will climb to $20.2 billion by 2019, according to Packaged Facts, a market research firm.

Not only has there been huge growth in the number of farm-to-table restaurants and farmers’ markets, but grocery chains and big box retailers, including Wal-Mart, are elbowing their way in, aggressively expanding and marketing their locally grown offerings for sale.

Wal-Mart sells $749.6 million of “locally grown” produce annually, while Supervalu, owner of the Jewel-Osco, Albertsons, and Lucky chains, buys between 25 and 40% of its produce locally, according to AtKearney, a consulting firm.

But in the midst of this boom, questions are being raised about what exactly “local” means. Just as controversy has dogged the labels, “all natural” and “organic,” there are real concerns that consumers may not be getting what they think when they “buy local” at the local supermarket. The label “local” is too often part marketing hype, some say.

“Consumers take the term ‘local’ and they infer that it’s from a small farm, they infer it’s organic, even though it may not be,” says Shermain Hardesty, PhD, extension economist at UC Davis’ agricultural and resource economics program.

But is it? Not exactly. There’s no agreed upon definition of “locally-grown,” meaning no consensus on the distance from farm to shelf or whether local means it necessarily comes from small farms — and not a big ag farm. Sometimes there’s clear stretching of the spirit of the term, or even outright fraud (as when a few California restaurants were found to be have falsely claiming to use locally produced food.)

Why people want to buy local

The trend has been driven, in part, by the idea that produce that has to travel fewer miles between farm and table often will taste better and retain more nutrients. Fruit that can ripen longer on the plant generally tastes better, and small farmers tend to produce varieties that are more favorable, albeit less able to stand travel across the country.

Also, many shoppers want to support local farmers. There also is the belief that local food leaves a smaller carbon footprint and so is better for the environment, though that may not be always the case.

The biggest gripe of proponents of local food is that there’s no universal standard or legal definition of local. When ATKearny asked a group of millennial consumers what they thought “local” meant, they said food grown no more than 80 miles away.

Yet, the 2008 Farm Act, an agricultural policy law, defines a “locally or regionally produced agricultural food product” as one that is marketed less than 400 miles from its origin. That’s like driving from Rhode Island to Washington D.C. and driving through six states. A few states such as Vermont and Connecticut have established rules that define local as within the borders of the state or within a certain small perimeter of the state.

Two-thirds of shoppers who buy locally grown or locally produced foods do so in supermarket and grocery stores, according to The Packaged Facts market research, and retailers vary in how they meet the spirit of the word “local.” Wal-Mart defines local as grown and sold in the same state, whether the state is teeny Rhode Island or ginormous Texas. For Safeway, it’s an eight-hour drive.

Even Whole Foods states on their locally grown page that “mostly we like to leave it up to our stores” but generally use state lines or regions within large states.

Some advocates in the field say that 100 to 150 miles should be the definition. “You take a state like California, and something grown across the border in Nevada could be more local than something hundreds of miles away within the state,” says Jim Prevor, editor of Produce Business, a trade publication.

Geography aside, most shoppers associate “locally-grown” with small, or maybe midsized, farms. Isn’t that why Walmart and other stores feature photos of local farmers in their stores, not, say, executives of Dole?

But local doesn’t typically refer to the size of the farm. “In Georgia, Vidalia onions are all marketed as local, whether the producer is large scale or small scale. If you’re in California, all California oranges, no matter how big the farm, are marketed as local,” says Prevor.

Still, Prevor and others say that the buying local movement is benefitting many small and midsized farms, and increasingly, consumers are buying foods grown closer to where they live. It’s just not always easy to know for sure what you’re getting when you’re buying “local.”

As a result, people who are hyperpassionate about buying local — self-described locavores—tend to be selective about where they shop. “If they truly want local, they’ll want to shop at the farm or through a CSA,” says Prevor.