These are the 10 best airlines in the world 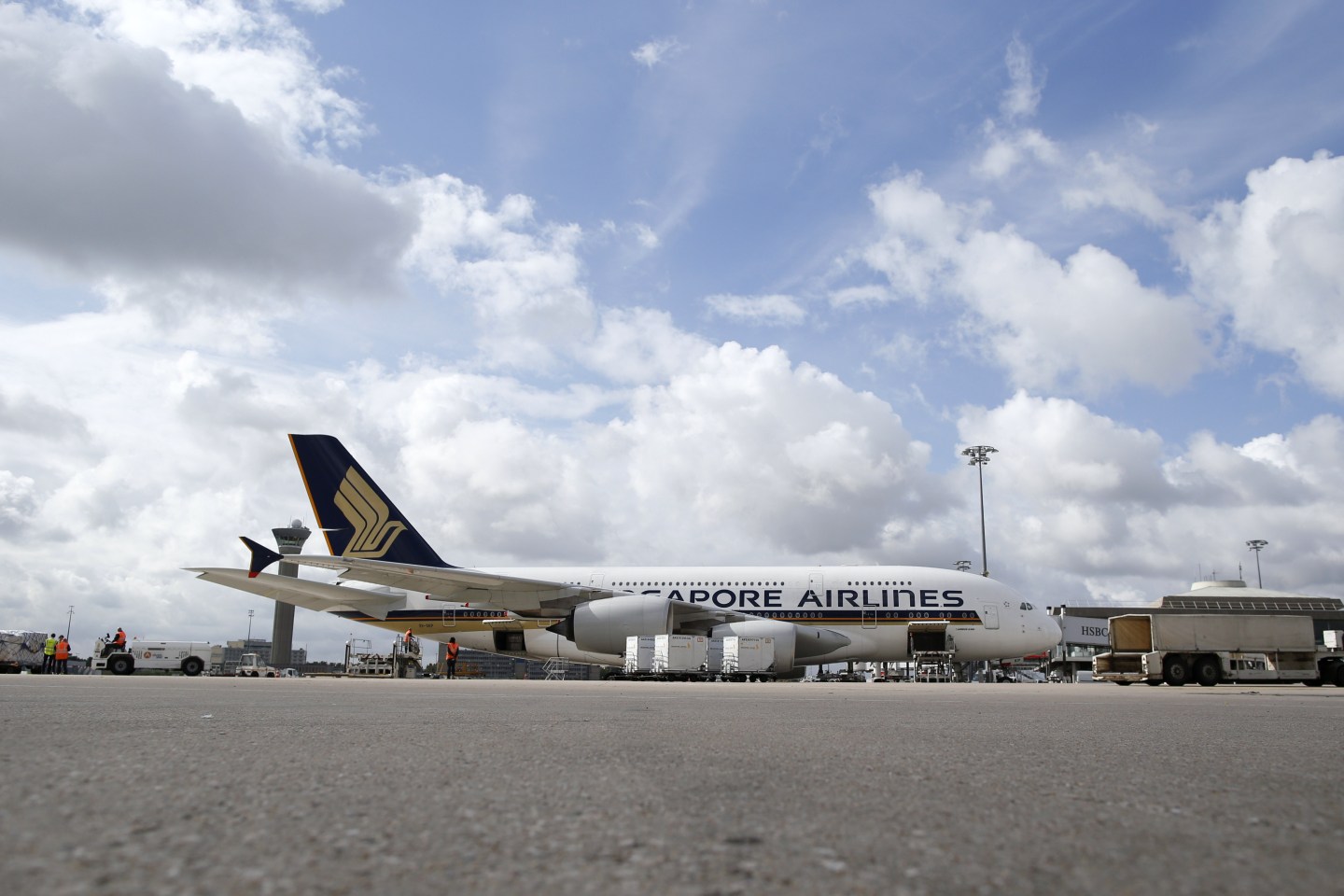 Decades ago, flying was an incredible privilege. Travelers would don their sharpest duds and dine on real, non-plastic glassware. Boarding the plane meant settling into cushy—and dare we say it: spacious—seats for a few hours of relaxation, bubbly, and spectacular views of the world 30,000 feet below.

The World’s Best airlines, as selected by our readers, are fighting to bring back the Golden Age of air travel. Instead of cutting corners (read: leg room) they’re rolling out 82-inch-long beds fitted with natural mattresses and custom Italian linens. Instead of charging for that depressing bag of salted peanuts, they’re presenting a la carte menus designed by Michelin-starred chefs. Even in economy, passengers enjoy in-flight entertainment on HD-enabled screens while juicing up their devices via personal USB chargers.

This year, 39 airlines were ranked based on cabin comfort, in-flight service, customer service, value, and food. No one was surprised to see Singapore Airlines in the No. 1 international spot this year. That’s where it always is. In fact, Asia-based airlines repeatedly get high scores on our annual survey, and there are five in this year’s top 10. But the big story is the resurgence of carriers from Down Under.

Air New Zealand (the quirky carrier with innovative features like the convertible Sky Couch, viral safety videos starring icons like Richard Simmons, and amenity kits stuffed with “Beware, I sleep walk,” eye masks) leapt five spots since last year. And for the first time since 2007, Qantas appeared on our list.

As our World’s Best Airlines prove, relatively small creature comforts—in-flight Wi-Fi, seats that recline without disturbing neighbors—are being noticed by flyers. Plus, at the end of the day, genuine and helpful customer service, both on the ground and in the air, is crucial to getting top customer scores.

Competition for your miles is more rigorous than ever before, and these airlines are out to prove that they can, and will, give you something to look forward to on your next long-haul flight.

Consistent growth has finally placed Australia’s flag carrier on the International Top 10 list. Chalk it up to continued improvements to in-flight comfort, such as Marc Newson’s Skybeds with massage settings in business class, and economy seats with clever hammock-style footrests for tired tootsies. Also in business class? Chic, his-and-her amenity kits with graphic prints and hues by Jack and Kate Spade. Inside are Australian ASPAR products in South Pacific scents like sweet orange, almond, and rose geranium. Qantas also flies the world’s longest flight: 8,500 miles and a solid 16 hours. Is it any wonder travelers demand only the best from this far-flung flier?

Fashion-forward flight attendant uniforms, designed by Prabal Gurung, are just one of the ways this Japanese airline continues to rise in the ranks, overshadowing even Japan Airlines. In business class, passengers can enjoy a seat that lies flat. Another plus: the seats’ unique staggered configuration, which makes it possible to move about the cabin without disturbing your seatmates. A competitive premium economy cabin and a good sense of humor also keep the airline on top: consider the Star Wars-themed R2-D2 livery coming soon to an airport near you.

Despite that embarrassing “nut-rage” incident earlier this year, Korean Air still won over T+L readers. Excellent service, menus that feature Western, Chinese, Japanese, and quintessential Korean dishes, and seats in economy that somehow provide 34-inch pitch might have something to do with it. Updates like USB ports at every seat and in-flight duty-free shops peddling Longchamp totes and Crown Royal whisky are outshone only by the Celestial Bar on A380s. Here, first and prestige-class passengers can unwind, sip hand-crafted cocktails, and enjoy impressive views from the stratosphere.

Many travelers believe this Asian airline could use a refresh, but it hasn’t kept the carrier from slipping down the rungs. We suspect it has something to do with its award-winning economy class cabin, which doesn’t reserve comfort and small luxuries exclusively for premium class cabins. Even in coach, passengers enjoy 32-inch seat pitch, foot rests, and two meals even on six-hour flights. What’s not to love about stir-fried chicken, pork with noodles, or chicken curry with rice?

Sir Richard Branson celebrated the 30th birthday of his flagship carrier this year, bringing on sharply tailored Vivienne Westwood-designed uniforms (in the company’s iconic red hue) and a new fleet of Dreamliners. The cheeky airline, known for pioneering seat-back video and amenity kits in every class, continues to impress. Its trailblazing premium economy class offers roomy leather seats with a 38-inch pitch (the distance between the back of your seat and the fellow in front of you) a welcome glass of champagne, and traditional British fare served on china with stainless steel cutlery. There’s afternoon tea, of course, and pudding.

China-based airline Cathay Pacific keeps its strong position by making incremental changes to its interiors and food service in every cabin. By working with Michelin-starred restaurants in Hong Kong to create upscale, regionally-inspired menus, and loading their fleet with specially-designed equipment, like the revolutionary onboard rice cooker, Cathay Pacific distinguishes itself as one of the world’s best airlines for food. Thanks to fixed-shell economy seats (which allows you recline within your own space, and not into your neighbor’s) a long-haul flight on this carrier can be a pleasure.

After slipping significantly on the World’s Best list, the Doha-based carrier has returned to the top of the pack. Maybe it’s the new extra-wide body Airbus 350, or its in-flight menu designed by Master Chefs Nobu Matsuhisa and Vineet Bhatia. Or it could be the impressive on-board wine list, developed by Master of Wines James Cluer, who literally climbs mountains to make sure your wine tastes excellent even at 30,000-feet? Next year, Qatar Airways will expand its service to Atlanta, Boston, and Los Angeles. And for those looking to shorten their travel to-do list, the airline’s groundbreaking print-at-home luggage tags can be downloaded for 103 outgoing routes from the new Hamad International Airport.

This Middle Eastern carrier has returned to the top of the pack, which suggests an improvement in customer service. In-flight food continues to impress, with regional specialties (Arabic meze, lamb stew) served on bone china and fine linens in first class. Whether you’re in economy or elbowing up to the first class bar, the in-flight entertainment can’t be beat, thanks to the live TV programming. Even the amenity kits blow the competition away. The rugged Italian-leather men’s kit contains Bvlgari products, which can also be found in the airline’s signature first class Shower Spa.

For 20 years in a row, Singapore Airlines has maintained its position as the No. 1 international airline. How has it stayed on top? Singapore always sets the industry standard for service and for comfort. It was the first commercial airline to offer complimentary beverages and more than one meal option in economy. More recently, it became the first airline to fly the Airbus A380, the world’s largest passenger plane, and it recently revealed its premium economy class. Here, travelers can watch in-flight entertainment on 13.3” high-def monitors, sprawl out with foldout leg (and calf!) rests, and sip champagne. Whether you’re lounging in first class—on lie-flat beds reaching 82-inches in length and eating off Givenchy china—or in economy, on bolstered backrest cushions, the iconic “Singapore Girl” flight attendants, donning traditional batik-print sarong kebayas, provide unbeatable service to all, thanks to a rigorous four-month training program.

This article was previously published on Travel & Leisure. T&L is a content partner of Fortune.com.