How startups can save nuclear tech 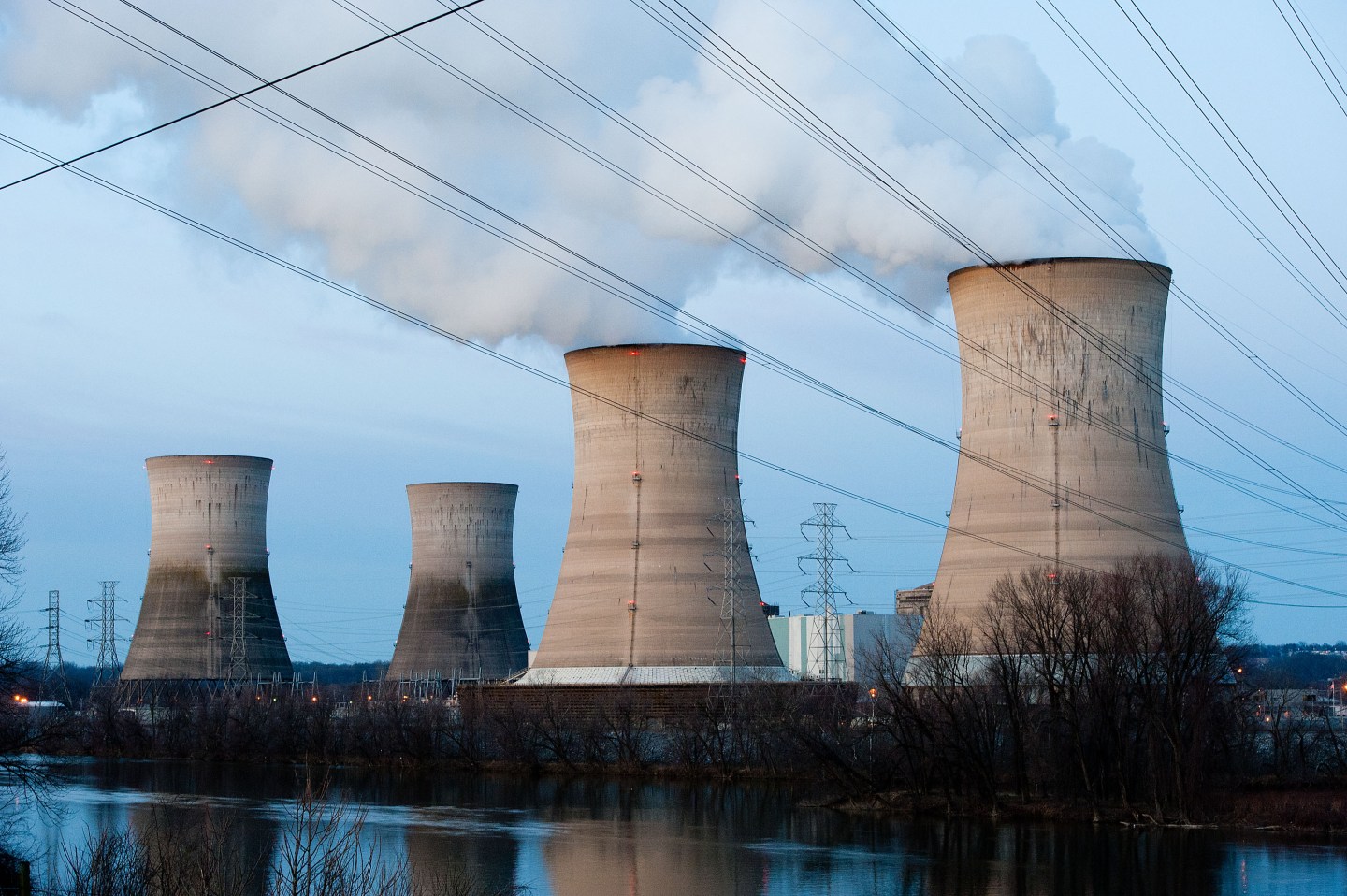 A recent disturbing report predicts that despite a colossal number of new solar panels and wind turbines over the next quarter century, the planet will still face dangerous rising temperatures. Basically even if these widely embraced clean energy technologies are put on overdrive, we’re still probably screwed.

The report was understandably bearish on big growth in nuclear power. Following the tragic earthquake and accompanying meltdown of the nuclear reactors in Fukushima, Japan in 2011, new nuclear reactor construction has been largely halted in many countries. Public fear over safety, especially following such incidents, has long hampered the industry, and led to it being the sort of black sheep of clean power.

But four years after the infamous accident, environmentalists, nuclear advocates, and researchers are now looking at nuclear tech as an almost necessary way to generate power without carbon emissions that, if used correctly, could be crucial to help the world avoid the worst of global warming. And unlike with solar and wind, nuclear reactors generate power around the clock.

Tapping into this emerging sentiment is a new wave of entrepreneurs and investors, many in Silicon Valley, who are passionate about how tech innovation can lift the industry out of its nuclear stalemate.

The new guard are working within a nuclear industry that is stuck in the regulatory and financing patterns of old. Big conglomerates dominate and career nuclear execs are the norm. But the lack of interest in new tech and new ideas are in sharp contrast to the high stakes of averting planetary catastrophe.

Last month, beneath the high-vaulted ceilings of the sleek offices of Founders Fund, a venture capital firm that backed Facebook, Airbnb and SpaceX, sits a small group of these passionate nuclear evangelists. They are supposed to appear on a panel about nuclear energy that I’m moderating, but they’re actually far more interesting to listen to just chatting on their own.

There’s a spread of wine and cheese in one corner, and around the room are windows big enough to see the San Francisco Bay in the background. The wooden door into the office is so preposterously large that you can’t help but instinctively feel what they seem to be implying: We do big things. At one point, the firm adopted the motto “we wanted flying cars, instead we got 140 characters,” as a sort of dismissal of the preoccupation among many Silicon Valley investors with the next hot consumer app.

Dewan, who looks a bit like actress Amy Adams, is one of the clear leaders of this growing movement of nuclear entrepreneurs. The nuclear policy advocates in the room refer to her as “their secret weapon” that they use in meetings on Capital Hill to inspire and make connections. She’s young, well-spoken and doesn’t fit the profile of the typical nuclear industry exec.

She and the senior statesman in the room, venture capital icon Ray Rothrock, take turns interrupting each other to answer questions about the hurdles that face startups in the nuclear sector. Unlike Dewan, Rothrock fits the physical description of the typical nuclear exec, but he’s actually anything but.

Rothrock’s been a venture capitalist for over two decades. He backed Sun Microsystems early on, launched the Internet investing practice for VC firm Venrock in the early 90’s, and later formed the company’s energy investing practice. He also started his career as a nuclear engineer in the late 80’s and early 90’s before getting the investing itch.

Some of Rothrock’s nuclear ambitions are poured into a stealthy startup, Tri Alpa Energy, that is working on nuclear fusion (nuclear fission is what’s used in today’s reactors). Years ago Venrock backed Tri Alpha Energy, and the company now also has the financial support of the Russian government (through the nanotech company Rusnano), Microsoft co-founder Paul Allen, and Goldman Sachs. Rothrock is Tri Alpa Energy’s chairman.

Dewan and Rothrock say nuclear tech is undergoing a period of rare entrepreneurial innovation. Rothrock says that compared to when he was in school, there are many more students today working on nuclear tech projects because of pressing climate change.

They cite figures of 55 nuclear startups with a total of $1.6 billion in funding. Rothrock says people don’t believe him when he says there’s that many startups working on nuclear technology. But those numbers are tiny compared to how many on-demand delivery startups, or mobile photo sharing startups, there are with millions of dollars from venture capitalists.

Founders Fund partner Scott Nolan, who made the investment in Transatomic Power, compares the nuclear entrepreneurial tech movement to what’s been happening in aerospace with young disruptor SpaceX and others. Nolan was an early employee at SpaceX and helped develop the propulsion systems used on the Falcon 1 and Falcon 9 rockets and the Dragon spacecraft.

Investors beyond Venrock and Founders Fund are starting to take notice. Last month the head of Silicon Valley accelerator Y Combinator, Sam Altman, said he was joining the boards of two nuclear startups. Helion Energy, which is building a magnet-based fusion reactor, and UPower, which has designed a small modular fission reactor, unusually went through the Y Combinator program.

Then there’s young nuclear fusion startup General Fusion, which is backed by Canadian venture capitalists Chrysalix Venture Capital, Amazon CEO Jeff Bezos, and the Canadian government. The company hopes to have a working prototype of its fusion reactor this year and an operating reactor in 2020.

Bill Gates has backed a nuclear startup called TerraPower, which was a spin off from the intellectual property incubator Intellectual Ventures. The company is working on a technology called a traveling wave nuclear reactor, which uses nuclear waste as a power source.

There’s also NuScale Power, which has been working on small, modular water reactors. Instead of the massive 1 gigawatt nuclear power generators that are in use today, NuScale Power makes a smaller 50 megawatt one (1,000 megawatts make 1 gigawatt).

Many of these nuclear startups, like Transatomic Power and TerraPower, are trying to address the issue of nuclear waste with their new reactor designs. That’s because the problem of what to do with the radioactive byproduct that results after a reactor has used up its fuel, is both complicated and important for the future of the nuclear industry.

Nuclear technology can take decades to move from the lab into commercialization. Many nuclear startups don’t even give commercialization estimates because it can be so many years away. That makes it difficult for investors to back because they don’t know when they can expect a return.

The traditional nuclear industry also requires billions of dollars to get nuclear reactors built. The first nuclear plant under construction in the U.S. in decades, in Georgia, is estimated to cost $14 billion, and is now over budget and behind schedule.

Access to funding will plague all of the nuclear startups. NuScale Power faced a funding crunch and sold a majority ownership to Texas energy services company Fluor. Helion Energy is in the process of raising a round of $21.23 million and has closed on about half it.

But the biggest barrier for a nuclear startup could be regulation. It can take years to wade through the regulatory process of the U.S. Nuclear Regulatory Commission.

The NRC was born out of the Atomic Energy Commission of the 1940s, and its history is tied with nuclear arms proliferation and the military. It’s a closed, enforcing regulatory body and not equipped to deal with building relationships with entrepreneurs.

Rothrock has been advocating for an entirely new federal nuclear agency that would operate like the federal Food and Drug Administration. When pharmaceutical companies submit drugs for approval with the FDA they have to meet certain milestones with their studies and prove that it works. Rothrock thinks an ‘FDA for nuclear’ could create the same predictable milestones for nuclear reactors and enable entrepreneurs and startups to get their new reactor technologies off the ground much more quickly.

If Rothrock and Dewan can help deliver changes in the nuclear tech industry, it could help open up this much neglected sector to some of the brightest and passionate young minds. Instead of flocking to Silicon Valley to create mobile apps, maybe the top students will turn to nuclear, like Dewan did.

And if the U.S. nuclear industry doesn’t change, many of these innovations will be commercialized overseas. China’s appetite for any new power generation tech is voracious. Russia is also particularly interested in new nuclear power.

Dewan and Rothrock have an important mission. With climate change looming on the horizon, nuclear technology could be the planet’s best hope.