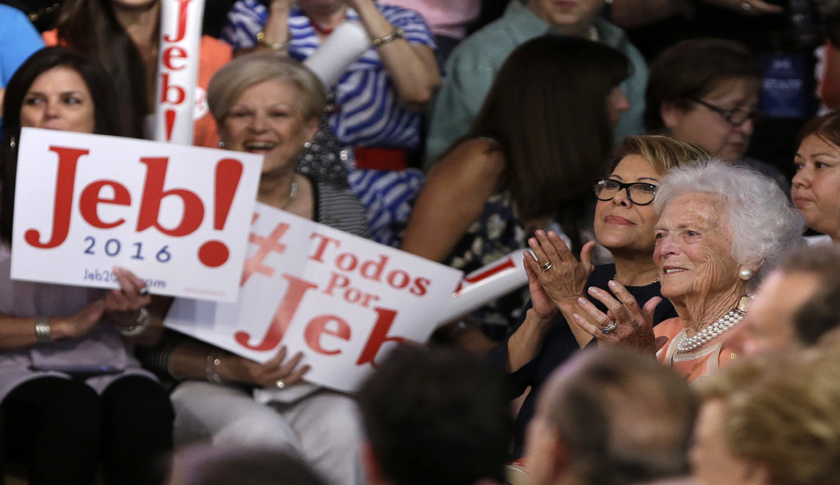 Jeb Bush released his campaign logo on Twitter Monday, a day ahead of today’s official announcement of his 2016 presidential candidacy. Hillary Clinton’s logo, which debuted in April, is distinguished by its pointing arrow, and Jeb’s by its exclamation point.

Believe it or not, both logos drew criticism immediately upon arrival on Twitter and from other corners of the Internet–Bush’s largely for its whimsical exclamation point, and Clinton’s mostly for the red-colored, right-pointing arrow, which many saw as incongruous to her party.

But what are these stylized combinations of letters, shapes, and symbols really saying? Just as the candidates differ on opinion and perspective, so do the design pros viewing these omnipresent emblems of the campaign season.

“Side by side, I find it hilarious that they’re both trying to convey how fun and lighthearted they are when you know full well this election will be a bloodbath,” said Elizabeth Carey Smith, design director for Zady.

Juliette Cezzar, President of AIGA/NY and the Associate Director of the Communication Design program at Parsons School of Design, is a fan of both marks. “I think they’re evidence that after the two Obama campaigns, candidates have finally started to understand the value of professional design in their campaigns.”

She added, “I don’t know why it still makes the news when people comment on the internet that they hate a logo, but I guess it’s good for the campaigns since it gets the marks out there.”

Jeb Bush’s logo doesn’t include the family name, but that’s nothing new.

It’s an update of a logo the former Florida governor has used variations of since 1994: just the nickname “Jeb” plus that exclamation point.

In the text messaging, instant messaging, 140-characters era, people are punctuating less, so when punctuation is used, it is more likely to be analyzed.

But to some that aspect is fine. Cezzar calls Jeb’s logo “well balanced and calculated, working hard to both shed his baggage [dropping his Bush name] and add the enthusiasm he lacks.”

But Elizabeth Carey Smith is in the critical corner on some technical aspects. “I like that Jeb has used a variation of what he has always used, and that he conspicuously is leaving out the ‘Bush’ part. People are still mad about Bush, you know. I don’t even think the current crazies would like him very much. Not crazy enough!

“From a design point of view, I don’t mind the Jeb! sentiment,” she contined. “But the J seems stupidly elongated and the exclamation point feels cartoonish. The really lightweight 2016 is slapped on and has nothing to do with the typography of the Jeb!. It won’t scale well at all, but maybe he’s making an interchangeable system for when he runs again in 2020. Those Bushes don’t give up.”

Clinton’s logo was devised by Michael Beirut at Pentagram as a donation to the campaign, drew praise from Elizabeth Carey Smith.“Their work is rooted in a great Midwest sensibility married with Italian austerity and design authority. And their work for her logo shows that. Simple devices that were considered beyond just what the logo looks like; see her H-shaped stage over the weekend, and you’ll see the design team thought about how far they could really take that clever twist of arrow + H.”

Juliette Cezzar gives the example of the logo filled in with the rainbow flag to show her support for same-sex marriage. “The Hillary mark doesn’t make sense unless you look at it in context. It’s more of a container than a message, changing with the constituency that it’s speaking to. Philosophically, this is very much aligned with how she wants to represent herself and what she wants to say.”

As NPR’s lead Editor for Politics and Digital Audience put it, “It’s kind of becoming the Empire State Building of presidential campaign logos — changing colors to celebrate any variety of milestones and holidays, from pink for breast cancer awareness to red, white and blue for Memorial Day to ‘pastel fades’ for Easter.”

“I understand that an arrow pointing right means forward (thanks, tape decks) but in the politico world, an arrow that points to the right is pointing to the right wing. Which is the opposite of her party,” said Paul Alvord, Senior Mobile Product Designer at FBS Data Systems, adding “Her logo comes off too sharp, in both color and angles.The diagonals are too dramatic on the arrow, and the H has no nuance or personality at all.”

In closing, Juliette Cezzar points to a political logo gone really wrong. “If you really want to see a logo that was made around a conference table by people who thought they could do better than ‘overpriced designers,’ I present to you Marco Rubio’s campaign logo – not only do you have terrible kerning (a dead giveaway), but also the horrible decision to put a map of only the continental U.S. as the dot of the “i,” which from a distance or at a small scale will always look like a bug on a windshield. Not the right message.”