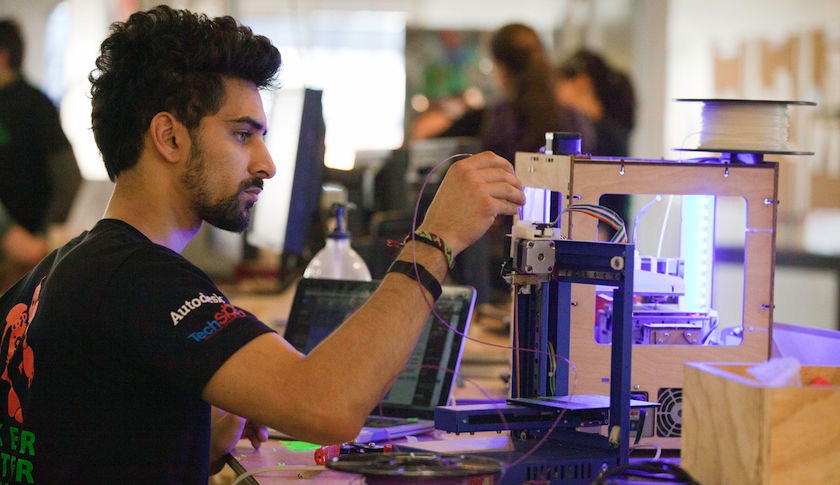 One of the first things you notice when you walk into TechShop’s 17,000-square-foot flagship fabrication studio in downtown San Francisco is the noise—the constant buzz and occasional bang of heavy machines biting and slicing into all manner of material: steel, aluminum, acrylic, wood.

It’s the sound of the Maker Movement, a phenomenon that is helping to fuel entrepreneurism and, for a growing group, changing the future of work.

The din promises to get only louder from here. On Friday, at a White House event, TechShop will announce that it’s aiming to teach others how to launch 1,000 smaller “maker spaces” across the country within the next two years.

For $4,500, TechShop will provide guidance on how to design these independent places, buy and maintain the industrial equipment inside, and educate users via a standardized curriculum. “It’s the nuts and bolts of how you actually run one of these,” says TechShop CEO Mark Hatch, who describes his nine-year-old company as “Kinko’s for geeks.”

By creating and certifying mini versions of itself through its Makerspace Academy, TechShop hopes to help midwife thousands of small businesses (some of which will become large businesses).

It also wants to generate income. In addition to collecting tuition at its academy, TechShop will share in any fees charged by the spaces it spawns. Hatch also believes that some of those who join one of these 1,000- to 3,000-square-foot operations will eventually want to move on to a full-fledged TechShop.

The company, which charges $150 a month for access to more than $1 million worth of professional tools (like laser cutters and 3-D printers), has eight locations around the nation serving some 7,000 members. It will soon open two more.

TechShop also offers hundreds of classes that, thanks to how easy it has become to use its array of contraptions, can turn a novice into a craftsman in a matter of days.

“Software really does lower the barrier of entry,” says Jesse Harrington Au, the “maker advocate” at Autodesk, which is a major investor in TechShop and has also donated all the computer-aided design and computer-aided manufacturing programs used at TechShop’s facilities. Tasks that five or 10 years ago required advanced training and many months to complete, Au notes, can now be accomplished in a few hours.

“This is a revolution,” says Hatch. “If you can imagine it, you can make it. And that’s new to the world.” TechShop’s logo carries this same sentiment: “Build your dreams here.”

America could use more dreamers. Although Silicon Valley has projected an image that the U.S. is fertile ground for startups, the rate at which new companies are being formed has been declining steadily for more than 30 years.

TechShop is a laboratory for those determined to defy this trend. Most of its members aren’t hobbyists, Hatch says, but are actively pursuing some kind of vocation. They typically fall into one of two camps.

The first includes people who come to TechShop to put together a prototype. The founders of Square built their first credit-card reader there. Scores of others have done the same, including those behind Lightning Motorcycles, the lamp maker Lumio, and BioLite, a social enterprise that makes consumer energy products for emerging markets.

For businesses like these, the advantages of TechShop are obvious: It saves them a ton of money and time because they don’t have to buy expensive equipment or hire a contract manufacturer out of the gate.

But as many discover, there’s another benefit as well: being around other entrepreneurs from a wide variety of fields. “I got a lot of advice from people at TechShop who started a little ahead of us,” says Anton Willis, the co-founder of Oru Kayak, which makes watercraft that you take out of a small storage box and unfold, origami-like, in just a few minutes.

Eventually, many successful businesses get too big for TechShop and fill their own offices and factories. “At some point, you grow out of it,” says Kendrick Coburn, an engineer at prosthetics maker LIM Innovations, another TechShop progeny.

But those in the second camp—artisans churning out all kinds of crafts—often stick around, using TechShop as their production line. Some of these folks have day jobs and use TechShop to make money on the side. Others have made it their full-time occupation. In either case, they are all tapping into the increasing demand for locally made goods.

Some at TechShop have bankrolled their ventures through crowdfunding sites like Kickstarter, while many of the artists sell their wares through online marketplaces such as Etsy. “None of these things even existed a decade ago,” Hatch points out.

Hatch and his colleagues delight in telling the stories of those who’ve turned their lives around at TechShop, like the unemployed advertising copywriter who now has a thriving jewelry business. “What we’re really selling is personal transformations,” says Andrew Calvo, a senior manager at TechShop in San Francisco.

For many, of course, it’s not so simple. Starting any business is hard, and most fail. And for all the excitement of being an entrepreneur, it’s difficult to figure out how the individual craftspeople, in particular, will ever have decent pensions or other forms of security associated with more traditional employment.

Still, TechShop is clearly onto something. The company recently went to a 24/7 schedule at all of its locations after the staff found they were kicking out lots of members at midnight.