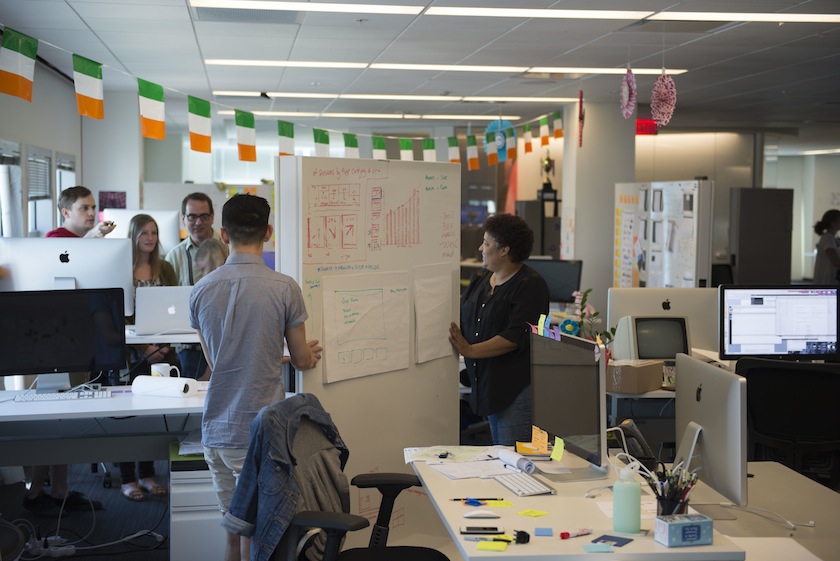 In 2013, IBM (IBM) expanded its software development center in Austin, Texas, bringing 60 new designers and engineers on board. Squeezing so many more people into an office that already had about 200 employees took some creativity. “We were split up into four big rooms then, and everybody had big, heavy wooden furniture that was really hard to move,” recalls Adam Cutler, the design center’s director. “So employees kept taking it apart and reconfiguring the pieces to accommodate whatever they were working on.”

That gave Cutler an idea. Why not redesign the office so teams that come together to collaborate on a project can build their own workspace, exactly the way it works best for them? And, instead of putting up permanent walls that people then have to work around, why not let employees divide up the space into small quiet areas, larger enclaves, temporary conference rooms, or whatever combination they need at any given time?

By now, it’s a familiar dilemma: Big, open bullpen-style layouts can be noisy and distracting, while cubicles offer privacy but tend to make collaboration harder. IBM’s Austin office combines the advantages of both by letting people set up the kind of space they need and then dismantle it when they’re finished.

Everything is movable—including the walls, which double as whiteboards and can slide around on wheels or on rails mounted in the ceiling. No heavy lifting is required, says Cutler. “We designed every desk, chair, wall, workstation, and table so it can be moved by no more than two [hypothetical] people who are each five feet tall and weigh 80 pounds.” As a result, the floor plan is “constantly shifting and changing,” he adds. “Come back in two weeks and the whole place will look different than it looks right now.”

The 48,000-square-foot design center, located on two floors, also has “environments that mimic the rooms of a house,” he adds, with “areas modeled after dining rooms, where you can spread projects out on big tables, and other areas for relaxation, with incandescent lighting and cushy sofas.” A large kitchen with a long central island is “a gathering place where people can hang out and exchange ideas.”

That combination of flexibility and hominess “makes collaboration easy. My team loves it,” says Liz Holz, who leads 18 members of the group designing IBM’s X-Force Exchange security software. That’s partly because, if a given layout isn’t working well for the people using it, they can change it quickly and get on with their work.

On its latest project, her team “started out in a big open space, but that was too distracting,” Holz says. “So we moved everything around according to who was working most closely with whom, and who wanted to be nearer to what.” By contrast with her experience at a previous employer with an open-plan office, she says, “people here who needed to find a quiet place to think didn’t have to go home to get their work done.”