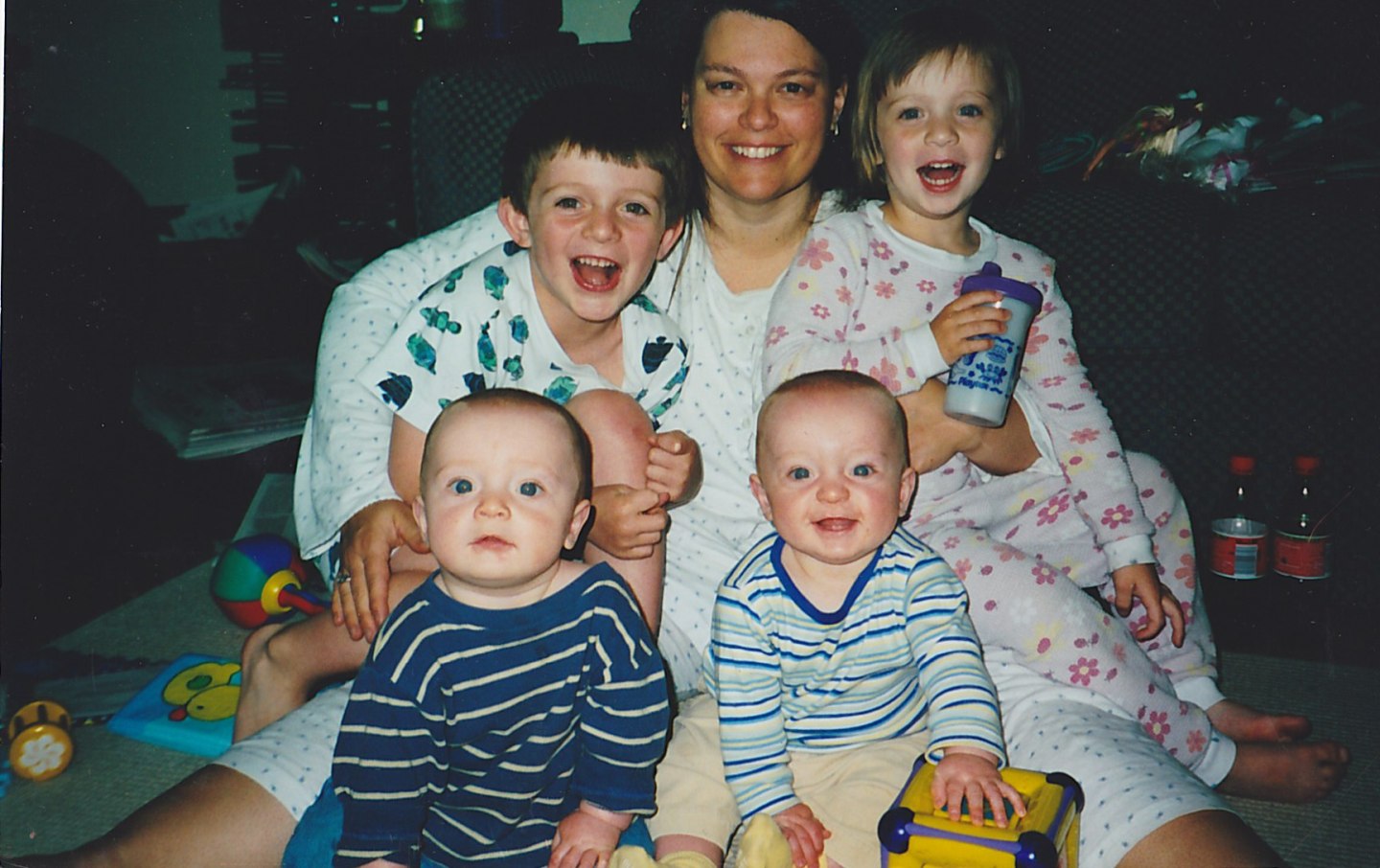 Susan Wojcicki, CEO of YouTube, had her fifth child this winter. Helena Morrissey, CEO of Newton Investment Management company in the UK, has nine children. Karen Finerman, CEO of Metropolitan Capital Advisors and a panelist on CNBC’s Fast Money, manages her two sets of twins in addition to her other responsibilities.

In an era when putting the phrase “Why Women Still Can’t Have It All” on a magazine cover scores millions of reads, women like these with big careers and broods come to expect questions about how on earth they manage. When Maria Shriver (a mother of four) interviewed a very pregnant Wojcicki for the “Today Show” in December, she marveled, “I’ve read that you say you go home every night at 6 o’clock for dinner — is that still standing?”

Behind these questions is the assumption that if work and kids are hard to balance, lots of work and lots of kids would be even harder, but women with big jobs say that’s not the case. The autonomy and career capital that come with executive roles help you delegate on the job. You often have the resources to be strategic at home too — and the organizational skills to pull it all off. Professional women with four or more children share their secrets for managing life, secrets that can help any parent (dads too!) succeed.

1. What’s good for the family is good for each kid. If you have a large family, you’re managing a complex organization. “I started to realize I’m leading at work, and I’m leading at home, and the skill set is no different,” says Liz Wiseman, a former Oracle executive, entrepreneur, and mom of four. Leadership means being focused on the whole, particularly in managing children’s lives. Women handled potential extra-curricular craziness two ways. First, “We make them all do the same thing,” says Jaime Teevan, a researcher with Microsoft Research and a professor at the University of Washington, who has a 6-year-old, 8-year-old twins, and a 10-year-old. Tuesdays, her boys all do judo at the same time. She meets a girlfriend for happy hour at a brewery across the street. Net result? “I look forward to judo. It’s awesome.”

The other approach is to choose your location wisely. Mary Crotty, assistant general counsel at Pfizer and a mother of eight, lives in Pelham, NY, in a part of town where “a lot of the things are actually walkable,” she says. Jenny Dearborn, chief learning officer at SAP, and a mom of four, says that this is the upside of California: “We live in a part of the world where the weather permits them to go to places on their bikes.”

2. Enlist the village. Crotty’s children are close enough in age that with sports “a lot of times they would end up on the same team.” Even so, it’s impossible for two parents to get eight kids to everything, so “I have a lot of wonderful people in town who always help us out,” she says.

Living near family is also a great strategy. Wiseman lives near both sets of grandparents, and “often, the best parenting that’s going on in our house is grandparenting,” she says. When she and her husband travel, “the kids are not pining for their parents.” Needless to say, that makes travel easier.

3. Embrace work/life integration. Lisa Lacasse is the vice president for strategy and operations at the American Cancer Society Cancer Action Network. She also has four teenagers. “I just do everything all the time,” she says. “I’ll go to work and spend 20 minutes during downtime finalizing logistics for summer camp.” She works the hours that work for her, coming in a little later if she’s got a school event, and then making up the time elsewhere. “I’ve never asked permission for the flexibility of my job,” she says. In life, it’s sometimes better to ask for forgiveness, which may not be necessary if you do good work. “I think women in particular need to feel more empowered to do that,” she says. “No one ever told me to do it, I just did.”

If you can, structure your work schedule for flexibility. Lauren Liess owns Lauren Liess Interiors in Washington DC, and recently had her fourth child. She advises “Have a flex day — an open day where things go when life intervenes.” If you get called away for a kid emergency on Tuesday, and Thursday is your flex day, anything that didn’t happen on Tuesday can go there. You don’t fall behind.

Also, don’t hold to certain notions of what can be work time and what can’t be. Jenny Dearborn takes calls from 5-7 a.m. many days, “in my bathrobe, thankfully never telepresence.” She then hangs out with her kids before work. She also works at night after the kids go to bed. These hours that bookend the day enable her to collaborate with people around the world, yet still have family breakfast and dinner many days.

4. Prioritize self care. Managing a big career and a big family takes energy. So smart women manage their own energy like they’d manage an important direct report. Sleep is one necessary component. “I’d love to stay up late and do something great, but I go to sleep early and wake up again,” says Liess. Exercise also helps, and you can be creative about fitting it in. Crotty will exercise at 10 p.m. “That’s the time I can finally get to the gym,” she says. “I can always get a parking spot!”

Dearborn manages her early shift and late shift by exercising strategically during what would be an afternoon slump. “Exercise in the middle of the day gives me the boost to get through the end of the day,” she says.

5. Build your team at work. Lisa Barton, executive vice president at AEP Transmission, whose blended family consists of five daughters, stresses that work success is all about “investing time in others. That seems counterintuitive to a busy lifestyle, but I think it’s incredibly important. You end up lightening your load and end up giving people the opportunity to be successful, which they really enjoy.” When you can’t delegate, collaborate. “Two people don’t only get half the credit,” says Teevan. “You get almost the whole credit and you only do half the work.”

Seek sponsors and allies too. Crotty notes that her (female) boss encouraged her to seek promotions even with all her responsibilities, and gave her the flexibility to make it work. Wiseman came back from her first maternity leave and figured out that “I can’t solve my problems by working harder anymore. I have to solve them by being thoughtful.” She talked with her (male) boss who said, basically, tell me what you need. “I always felt like I had an ally,” she says, and as she built her career, “For me, it was important that those allies were men.” Many times, men are the ones in powerful positions, and have the capital to help you.

6. Build your team at home. “We spend money on things that make our lives easier,” says Teevan. When her boys were little, her family employed a full-time nanny whose responsibilities went beyond sitting. “She knew what days the kids didn’t have school. She had a credit card and would organize what summer camps they went to.” She figured out which groceries to buy. These days the kids are in school full time, but they have a housekeeper come twice a week. A trainer comes to the house twice a week because that’s more efficient than going to a gym. For a while, Teevan had a cook come and make 20 meals at once that the family would then pull out of the freezer.

7. Create connections when you can. Spending one on one time with each kid is hard if you have a brood — bit still doable. Dearborn goes into her children’s rooms at night and sits on their beds talking for 15 minutes. “That’s when they tell you their secrets,” she says. “It’s just the most precious time.” Some parents make a point of taking one child on an errand as a way to get time together.

8. Let it go. When you have a big family, the children have to learn to be independent. “It was a policy in my house that every child, from the time he was 11, would do his own laundry,” says Crotty. Learning to be responsible and capable early on is hardly a bad thing.

Indeed, when framed the right way, having a big family alongside a big career is actually liberating. While some parents fret about missing a swim meet for work, parents of four or more know that they will not be able to make every swim meet because some other child will have a soccer game at the exact same time. Once you acknowledge that it’s physically impossible to be everywhere, you release yourself from that script, and instead embrace one that allows you to be where it’s most important for you to be, at work and at home. “If you don’t prioritize, you can end up spending a lot of time providing little value, whether to a corporation or to your personal life,” says Barton. But “cleaning the house doesn’t matter as much as being there if your child is getting an award.” Knowing that makes a big career and a big family possible.

Laura Vanderkam, a mother of four, is the author of the forthcoming book I Know How She Does It: How Successful Women Make the Most of Their Time.