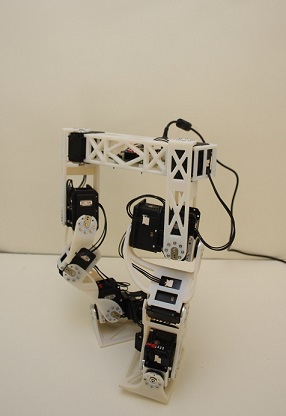 The animation depicts a project out of Disney Research, an R&D arm of the entertainment giant Walt Disney Company (DIS) that collaborates with academia. As the creature ambles and wobbles, it looks like a chocolate covered Pillsbury Doughboy sporting a beer belly. (Lay off those carbs, Doughboy! Hee hee.)

“Here, we develop a bipedal robot that is designed after an animation character, and generate a character-like walking motion for the robot,” the researchers declare in their paper, which they presented on Tuesday at this year’s IEEE International Conference on Robotics and Automation. “Creating robots that embody animation characters in the real world is highly demanded in the entertainment industry because such robots would allow people to physically interact with characters that they have only seen in films or TV.”

That demand is real. Disney made bank on toy sales from its Frozen franchise during Christmas. And the company seems to be extending that merchandising strategy to other properties, such the upcoming Star Wars film through its relationship with Sphero, the company behind the adorable rolling droid BB-8.

Disney’s uses for a bipedal robot are pretty straightforward: Imagine marching alongside your very own set of seven dwarves from Snow White, whistling as they work? Or palling around with a replica Abu the monkey from Aladdin? It’s pure Christmas list fodder.

The team’s bipedal hardware prototype is a bit less cute than the YouTube animation—jerky and awkward, albeit trekking with a spastic grace. Designing the robot was no simple feat: the researchers cite: “trajectory optimization,” “kinematic structures,” “computational framework,” “open-loop walking trajectories,” and, of course, the winner of the jargon contest: “humanoids with high-fidelity control of joint positions and torques have been developed.”

But one could easily see this being adapted into, say, a bite size Big Hero animatron. And that would be one small step for man, one giant leap for cute robots.