Google wants to patent the creepiest idea ever 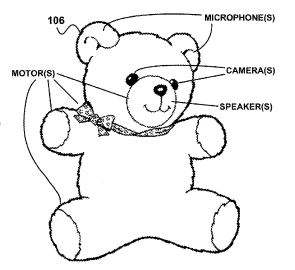 Google is working towards a patent for a sweet-looking toy with eyes that can track your movement and ears that can perk up when you speak, according to a new patent filing spotted by SmartUp Thursday.

The submission to the United States Patent and Trademark Office shows diagrams of an ordinary toy rabbit or teddy bear equipped with cameras behind its eyes and microphones in its ears.

“Upon reception or a detection of a social cue,”the form reads, “such as movement and/or a spoken word or phrase, the anthropomorphic device may aim its gaze at the source of the social cue.”

The theoretical toy could take verbal commands and send them to “media devices” like TVs. Of course, just because Google is seeking a patent doesn’t mean the product will come to light.