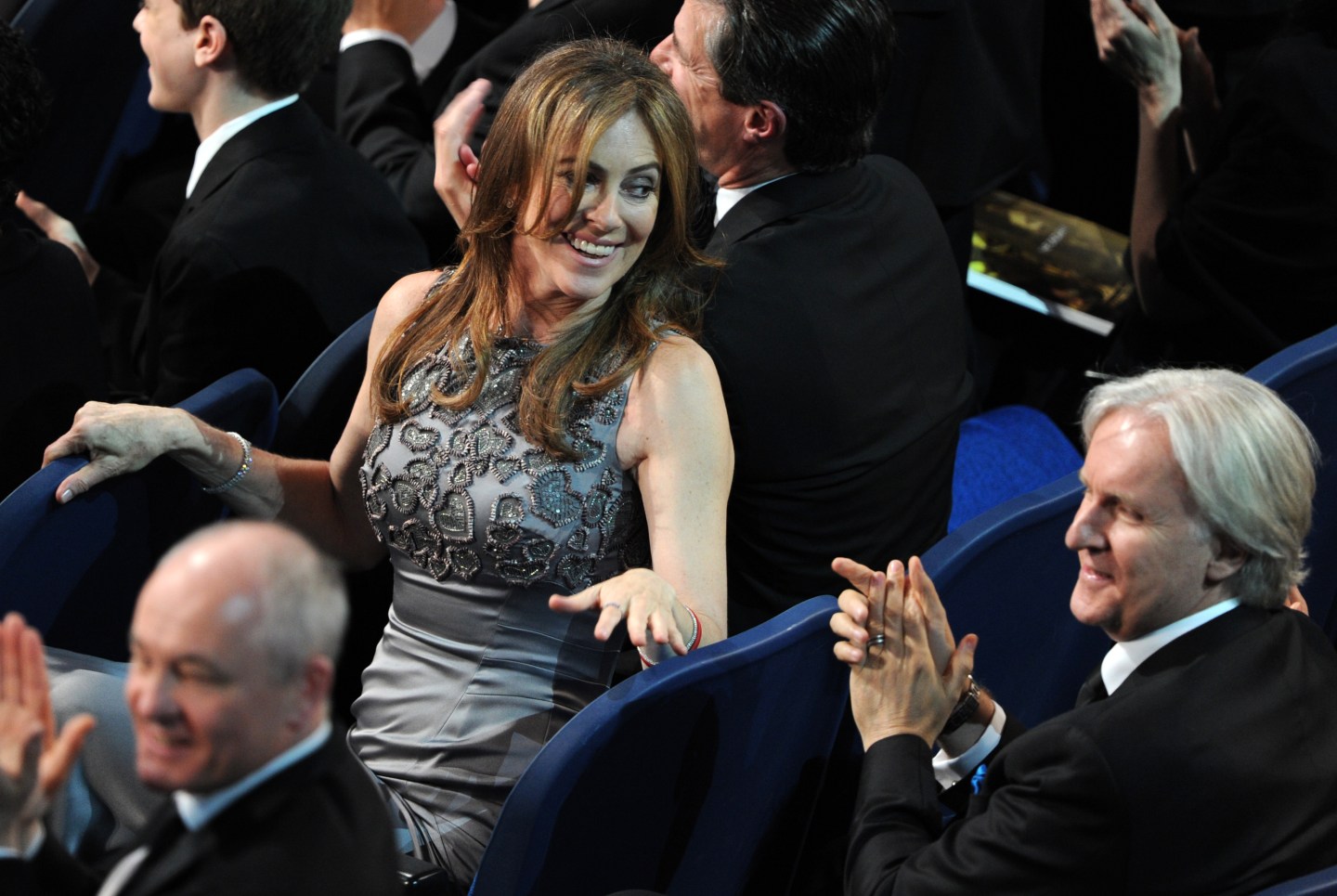 It only launched late last month, and already the Tumblr blog Sh-t People Say to Women Directors (& Other Women in Film) is deluged with horror stories about working in Hollywood. People are anonymously sharing stories of men saying outrageously sexist things like:

“You are going to have to let me know when you have your period, so I know when to expect your work quality to be an issue.”

“The worst thing we did in the 70’s was give women the idea they can have careers and babies at the same time.”

“Women of a certain age in the film industry are just weird.”

“If you ever fancy casual sex I’d definitely be up for that.”

“I was directing a series. And whenever I would say something to the DP that he didn’t particularly agree with he would say, ‘Good thing you’re pretty.’ Every. Single. Time.”

The founders have not revealed their identities and describe themselves as a “group of women working full time in the entertainment and media industries.” But they agreed to answer Fortune’s questions via email. They told Fortune that they set up the Tumblr blog as “a kind of crisis intervention.”

“Sexism is one of the most socially accepted forms of discrimination and a pervasive disease in the film and television business,” the founders of Shit People Say to Women Directors said in an email to Fortune. “The former president of the [Directors Guild of America] has acknowledged that gender inequality is a systemic problem that there is no easy solution to. There isn’t just a major gap in opportunity and earnings — it’s an enormous chasm. In fact, there were more opportunities for women in the silent era than there are in 2015.”

Indeed, in the years before the motion picture industry became lucrative and commercialized, with men controlling the reins, numerous women held positions of authority behind the camera: They were directors, actresses, screenwriters and producers, fronting more than 70 production and preproduction companies. Lois Weber, a multi-hyphenate combination of all of the above, was Universal Studios’ top-earning director in 1916. (A recent Los Angeles Times report revealed that Universal had an overwhelming number of male directors, 92.5 percent to be exact, helming its films between 2009 and 2014.)

Last year, women comprised a meager 7 percent of directors for the top 250 films, a two-point drop from 1998, according to the Center For the Study of Women in Television & Film. In April, the Sundance Film Festival and Women in Film Los Angeles released the results of a three-year study that found of the 1,300 highest-grossing movies released between 2002 and 2014, only 4 percent were directed by women.

Within hours of launching the blog, the founders said there were enough submissions to feed the blog for a year and, within a week, almost three years’ full — that’s hundreds of posts. Media interest is high. They said they “can barely keep up” with interview requests.

“[This is] indicative of how badly this conversation needed to happen in public. … Because there is only so long you can keep a group of people into a pot of boiling water before it bubbles over,” the founders said in their email to Fortune, explaining why people are responding to the blog.

In reading the blog, a casual observer might wonder — if there is such rampant sexual harassment and retrograde attitudes toward women, then why isn’t there more overt activism? Shouldn’t these Tumblr blog creators encourage women to report it rather than hide under anonymity?

The creators of the Tumblr blog said many women have been silenced out of fear over losing career opportunities — and getting tagged “whistle blowers” and “difficult.”

“We’ve watched this happen to director Lexi Alexander and screenwriter Julie Bush when they published their respective exposes on sexism in the film business,” they added, referring to blog posts by Alexander and Bush that risked backlash (and blacklisting) by taking the entertainment industry to task. (Alexander, whose last major movie was the 2010 drama Lifted, wrote last year: “There is no lack of female directors. Repeat after me: THERE IS NO LACK OF FEMALE DIRECTORS. But there is a huge lack of people willing to give female directors opportunities. I swear, if anyone near me even so much as whispers the sentence ‘Women probably don’t want to direct,’ my fist will fly as a reflex action.”)

The blog creators want to protect readers who are equally frustrated but not prepared to unmask themselves.

“One woman wrote in anonymously and then wrote in a second time because she was terrified someone might find out who she was,” they said. “Protecting the identities of the people who chose to participate was paramount, that so individuals could speak openly about these issues.”

Brenda Chapman, an animation writer-director with a storied career (Disney’s The Lion King, DreamWorks’ The Prince of Egypt), made headlines three years ago when she penned a New York Times op-ed addressing her painful experience being removed as the first female feature film director for Pixar’s Brave, a mother-daughter fairytale she created, and replaced by a male colleague. (She and Mark Andrews, her replacement, share the 2012 Oscar for best animated feature.)

In an interview with Fortune, Chapman, who received fellow animators’ support after going public about the ordeal, recalled her struggle “being the only woman in the room trying to explain my characters’ point of view of the mother and daughter and why they’re both sympathetic and they’re both not sympathetic. “

Chapman said she thinks “S—t People Say to Women Directors” will be a force for good in the entertainment business.

“The more people realize the stupidity of some of this stuff … they’ll be more careful because they don’t want to get quoted in there,” she said.

Mitch McCabe, a female documentary filmmaker, said she recently saw a female TV production executive challenged by other men “who couldn’t handle how smart she was” and “were caught on tape calling her ‘c–ty.'” Asked about S—t People Say About Women Directors, McCabe said: “I think it’s brilliant that it’s anonymous because we all need to work. … I’ve definitely learned to have no problem speaking up but, the same time, I have to protect my livelihood.”

Patricia Riggen, who helmed the upcoming Warner Brothers-distributed drama The 33 about the Chilean mining accident, said she just recently heard about the Tumblr blog but hadn’t read it yet. The Mexican director praised the producer, Mike Medavoy, for hiring her – “It was not an obvious choice at all to give the movie to a woman” – she said she feels like “an astronaut” in Hollywood because she’s one of the few working female minority filmmakers.

“We worked in very dangerous conditions through this movie,” said Riggen, who counts Oscar winner Kathryn Bigelow (The Hurt Locker, Zero Dark Thirty) as a hero. “We were inside a mine for six weeks — six days every week, six weeks, 14 hours a day, in a very harsh environment with very bad air and just really hard working conditions for everyone, men and women. I was standing all through the end. One thing I can say is that — besides being in control the entire time — I was one of the few that were left standing through all the hardship.”

Cathy Schulman, president of Women in Film Los Angeles, said she sees heightened attention on gender inequality issues within the industry. She believes that blogs such as S—t People Say to Women Directors represent a “tipping point” in awareness of the biases that marginalize female filmmakers after years of stagnation.

“There was almost a cultural ennui where everyone was so used to the status quo that the notion of questioning it seemed almost, if I may say, unnecessary,” she said. “And there was this kind of … acceptance of this unusual lack of parity given that we’re living in the year 2015.”

For more about women in film, watch this Fortune video: