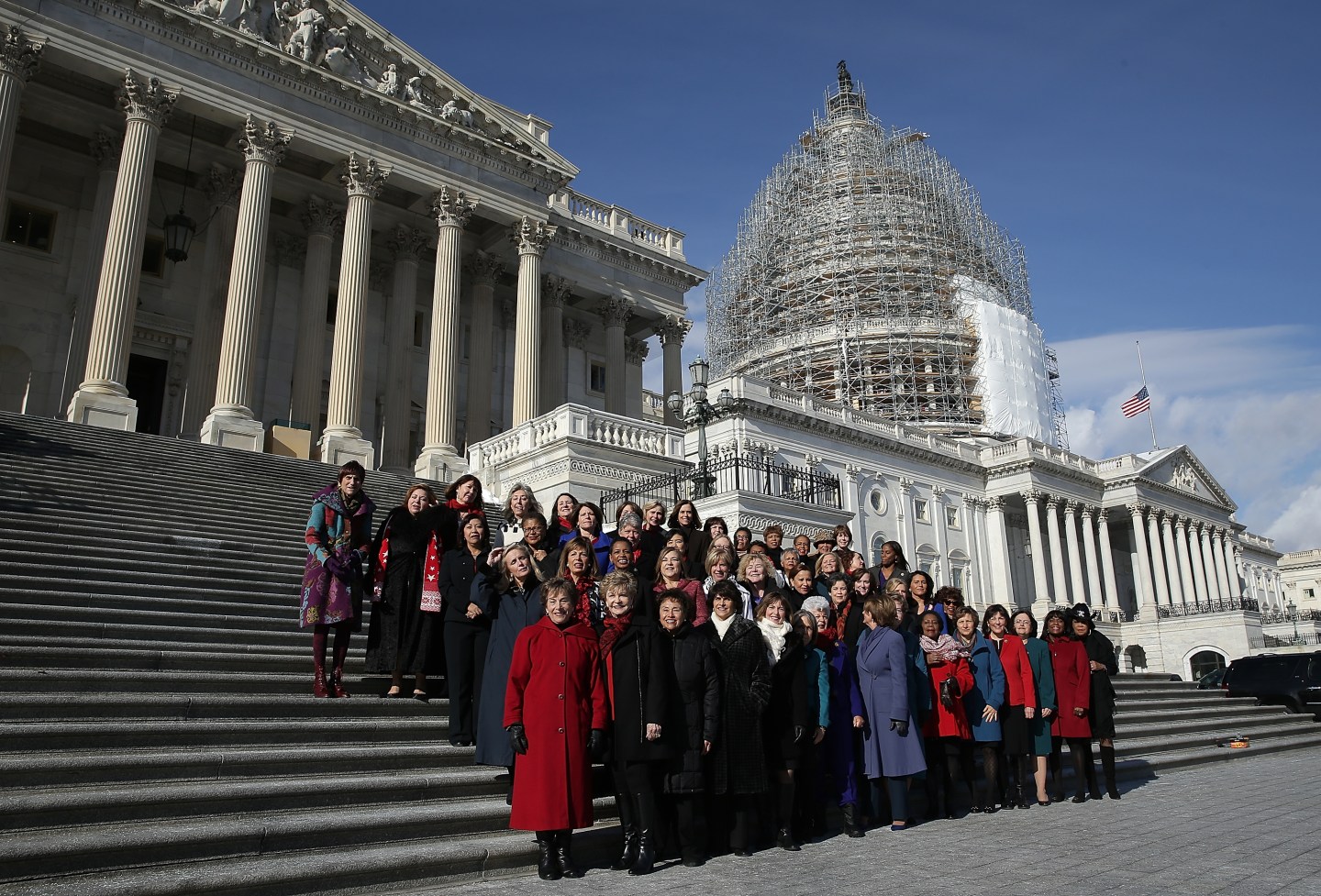 WASHINGTON, DC - JANUARY 07: The 65 House Democratic women elected to the 114th Congress gather on the steps of the U.S. Capitol for a group photo January 7, 2015 in Washington, DC. The group represents the largest number of women in a party caucus in the history of the U.S. Congress. (Photo by Win McNamee/Getty Images)
Photograph by Win McNamee — Getty Images

“Money is the mother’s milk of politics,” the late California politician Jesse Unruh famously said. Ironically, for female politicians, money doesn’t flow like it does for male candidates.

There are 104 women serving the 114th Congress. That’s an all-time record, but female members still account for only about 20% of the total body. And while a host of factors have contributed to keeping Congress unequal, money is a big one. Fundraising is the number one barrier that stops women from running for higher office, according to a study from Political Parity, a nonpartisan group working to increase the number Congresswomen and female governors. Another report, just released by The Sunlight Foundation and the Center for Responsive Politics, found that nearly 75% of the biggest donors in the 2014 midterm election were men.

Laura Cox Kaplan, regulatory affairs and public policy leader for accounting giant PwC, says her firm is trying clear away that blockade by changing the way its political action committee distributes money to politicians. In 2014, PwC’s PAC gave a total of $1.5 million to political candidates, according to the Center for Responsive Politics, a D.C. group that tracks political donations. While that figure pales in comparison to Washington’s biggest donors, Kaplan is hoping that, by focusing more of that money on female politicians, it can start to improve the gender balance in Congress.

“Washington seems broken,” says Kaplan. “We have seen both at PwC and with our clients that diverse groups function better.” She believes that increasing women’s power in politics will help break down gridlock in government and actually prompt lawmakers to get more done.

PwC began by reaching out to female members of Congress, who told the firm that changing the timing of donations could make a difference. So, Kaplan says, “We want to get more money out the door in the first quarter.” The idea is that, by donating to women early, the PAC “can dissuade challengers to women who we think are doing a good job.”

Kaplan is also working to get PwC to look beyond its immediate self-interest when it comes to who gets donations. “Maybe there’s a great women candidate, but she’s not on a committee that’s relevant to us. Let’s move her up the list anyway,” says Kaplan. As an example, she mentions Tulsi Gabbard, a Democrat from Hawaii, elected to the House of Representatives in 2012. Kaplan points out that Gabbard serves on the House Armed Services Committee, not a committee that’s particularly important to PwC. (Kaplan is quick to point out that firm does not plan to pay special attention to one particular party. She notes that Elise Stefanik, a Republican from New York, is an equally apt example).

The company is also working to put more women in the political pipeline, says Kaplan, citing the PwC public policy internship program. Roughly half of the interns selected for the program, which introduces rising college seniors to legislators, political consultants and other governing movers and shakers, are female.

Kaplan acknowledges that, in the world of political giving, PwC is a small fry. Alone, she says, the company’s actions will likely have little effect. However, she believes that taking the first step is essential–and will hopefully inspire others to do the same. “It’s going to take time to move the needle,” she says. “I’m talking to my counterparts in corporate America, urging them to do the same thing.”