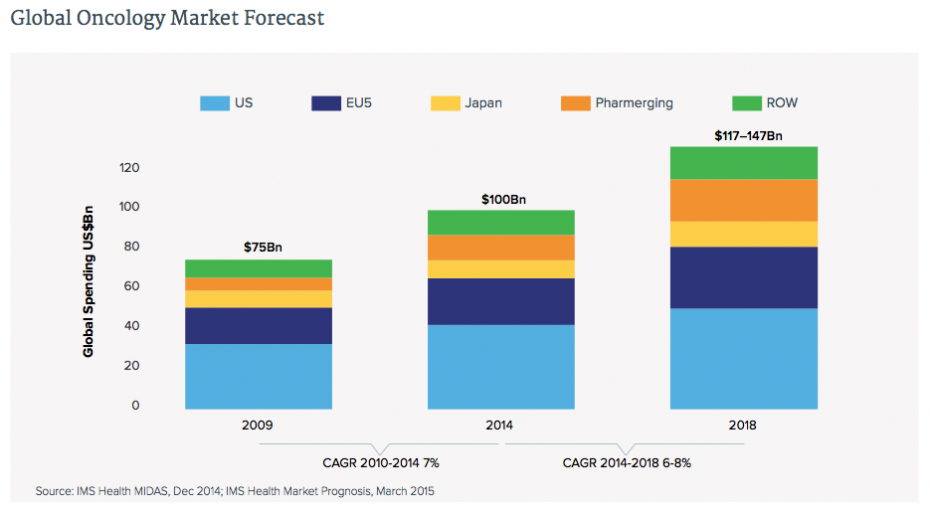 Spending on cancer drugs hit an all-time high last year, reaching the $100 billion mark worldwide for the first time, and cancer treatment outlays are expected to grow even faster in coming years given improvements in cancer care and survival rates.

The landmark figures come from a recent study by the IMS Institute for Healthcare Informatics. Growth in global spending on cancer drugs increased at a compound annual growth rate of 6.5% over the past five years (on a constant-dollar basis). Future spending on oncology medicines through 2018 is expected to grow as much as 8% annually. That spending remains concentrated largely in the U.S. and the five largest European countries, which together account for 66% of the total market for cancer drugs.

“The increased prevalence of most cancers, earlier treatment initiation, new medicines and improved outcomes are all contributing to the greater demand for oncology therapeutics around the world,” said Murray Aitken, IMS Health senior vice president and executive director of the IMS Institute for Healthcare Informatics.

Cancer medicines aren’t alone. Overall drug spending in the U.S. saw a significant boost in 2014, growing 13.1% last year after several years of declining rate increases, according to Express Scripts. Oncologic drugs’ share of total drug spending increased only slightly last year in the U.S., to 11.3% from 10.7% the year prior.

Spending on oncology drugs compared to other specialty indications is being driven higher by a confluence of factors. First off, better treatments and early diagnosis have increased the rate of cancer survivorship. Many patients with certain types of cancers, including prostate and liver cancer patients, are living longer as their cancer is treated more like a chronic illness that is controlled via ongoing therapy. Two-thirds of Americans diagnosed with cancer now live at least five years after their diagnosis, compared to just over half in 1990.

Secondly, those better drugs come with a corresponding price tag, especially given the rise of so-called precision medicine–i.e. drugs that are prescribed to target specific diseases based in part on the genetic profile of the patient or tumor. More than 1,000 of these tailored cancer treatments are in development, and we’ve already seen a handful hit the market. These drugs have the potential to vasty improve outcomes, but they often apply to only a small population and can cost $100,000 a year or more.

For instance, one of those targeted drugs, Keytruda, was approved by the Food and Drug Administration last year and has been lauded for increasing survival rates. It treats patients with genetically-linked metastatic melanoma and advanced, non-small cell lung cancer–and costs around $12,500 a month. That adds up to about $150,000 annually.

The use of these targeted therapies is growing. From 2010 to 2014, use of precision medicines grew by 14.6% worldwide, and they now represent 48% of total oncology spending, according to IMS. Spending is growing fastest in what IMS calls “pharmerging” countries–developing economies like China, Mexico and India, where spending is rising from a lower base.

In the U.S., the mechanisms to control pricing on these drugs face some limitations. The Medicare Modernization Act of 2003 prohibits Medicare from negotiating drug prices directly with manufacturers, which presents a particular problem for the future of Medicare costs. As a result, many cancer drugs are much more expensive in the U.S. compared to Europe and other countries where their governments are allowed to directly negotiate with manufacturers.

That doesn’t, however, prevent private pharmacy benefits managers like Express Scripts (ESRX) or CVS/caremark (CVS) from negotiating down prices on expensive specialty drugs. That is exactly what they’re doing, which could help mute the growth in cancer treatment spending. Such negotiations, recently, wrung 40% discounts on pricey new hepatitis C therapies, though dealing with cancer drugs will be much more sensitive.

“This is going to be a much slower and much bigger effort over time,” Steve Miller, the chief medical officer for Express Scripts, said during the company’s earnings call late last month. “Cancer is different than any other disease, much more emotional.”