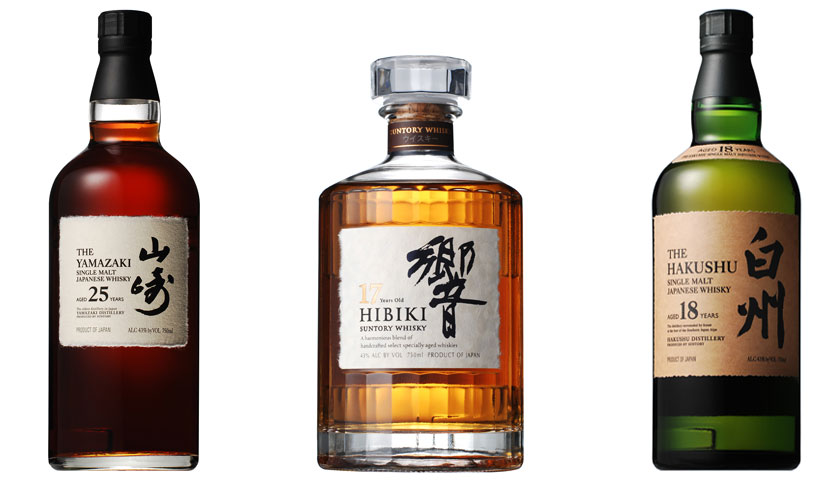 Japan-made Suntory whisky isn’t very well known in the United States, but if the brand generates any name recognition in America, it is likely linked to that simple slogan. The seven-word saying isn’t from a corporate advertising campaign, but instead is from American pop culture. The line was said by actor Bill Murray in a famous scene in the 2003 Sofia Coppola film Lost in Translation. In the movie, Murray plays a Hollywood actor visiting Japan to film a Suntory commercial.

Suntory Holdings Limited, the parent company of the whisky and the new owner of American bourbons and whiskeys, doesn’t mind the film’s connection to the spirit. President and CEO Takeshi Niinami lightheartedly referenced the line in a recent New York City presentation in front of members of the American media. When asked if they were aware of the phrase, almost every member of the audience raised their hands.

“If I asked that question in Japan, no one would raise their hands,” Niinami said, indicating the phrase is unfamiliar in Suntory’s home market.

But Suntory is hopeful Americans will soon learn more about what makes the whisky special. The company is in the early stages of an import-export strategy that began after completing the acquisition of U.S.-based Beam in a $16 billion deal that closed nearly a year ago.

Since then, Suntory has shipped more bourbons — including Jim Beam and Maker’s Mark — into Japan, while also planning to bring Japanese beverages, such as Hibiki Japanese Harmony, to the U.S. later this year. The import-export strategy hinges on introducing the Japanese to American bourbons, while also convincing Americans to think of Japanese whisky as more than just the inspiration behind a humorous scene in a Coppola film.

Beam Suntory is seeing some early success in Japan. Jim Beam grew 800% in Japan from 2013 to 2014. Suntory’s total portfolio of whiskies reported a 6% increase in sales last year in Japan. The company also benefits from a continued bourbon boom in North America with sales of Maker’s Mark and Knob Creek continuing to sell strongly.

“Beam Suntory is now a whisky powerhouse,” Niinami told Fortune. He said the company now produces whisky from Scotland and Japan, as well as whiskey from the U.S. and Ireland. (The spelling varies by country origin). “That is a huge differentiation from the competitors.”

The combination of Beam and Suntory created the world’s third-largest spirit company, trailing Diageo and Pernod Ricard, according to industry tracker IWSR. Suntory, the parent company, generates a little more than a third of its annual sales from alcoholic beverages, with the rest of the business coming from non-alcoholic drinks and foods. Only 9% of the company’s sales are derived from the Americas.

Japanese alcohol is still relatively unknown to American drinkers. Japan only ranks 20th among foreign nations that import distilled spirits into the U.S., with total imports from Japan valued at just over $10 million in 2014, according to data compiled from the U.S. International Trade Commission. U.S. bourbon and Tennessee whiskey makers have done a better job addressing the Japanese market, which is the sixth largest export market for the U.S. But whiskey shipments to Japan only totaled $72.9 million last year, a tiny sliver compared to the more than $1 billion value of annual global exports.
[fortune-brightcove videoid=3872972763001]

Those figures indicate Beam Suntory has a lot of work to do in both markets, but also a huge addressable market.

Japanese and American brown spirits differ in many ways. Japanese whiskies tend to have a more delicate taste, and those spirits are aged far longer than their U.S. counterparts. Japanese whiskies often sit in barrels for at least 10 years, while many U.S. bourbons age for three to four years. Suntory uses a variety of barrels to age whisky, while bourbon sits in new white oak barrels.

One big issue, Beam Suntory concedes, is inventory is tight in both markets. The company has said it wants to increase capacity in both Japan and Kentucky to meet demand. In the U.S., many of Beam’s rivals are also expanding their capacity as bourbons gain favor in the U.S. and markets abroad, stealing market share from beers, vodkas and Scotch.

Niinami said that the liquor maker is seeing tight inventories in Japan, but wants to bring as much Japanese whisky to North America as it can.

“This market is very important,” he said.