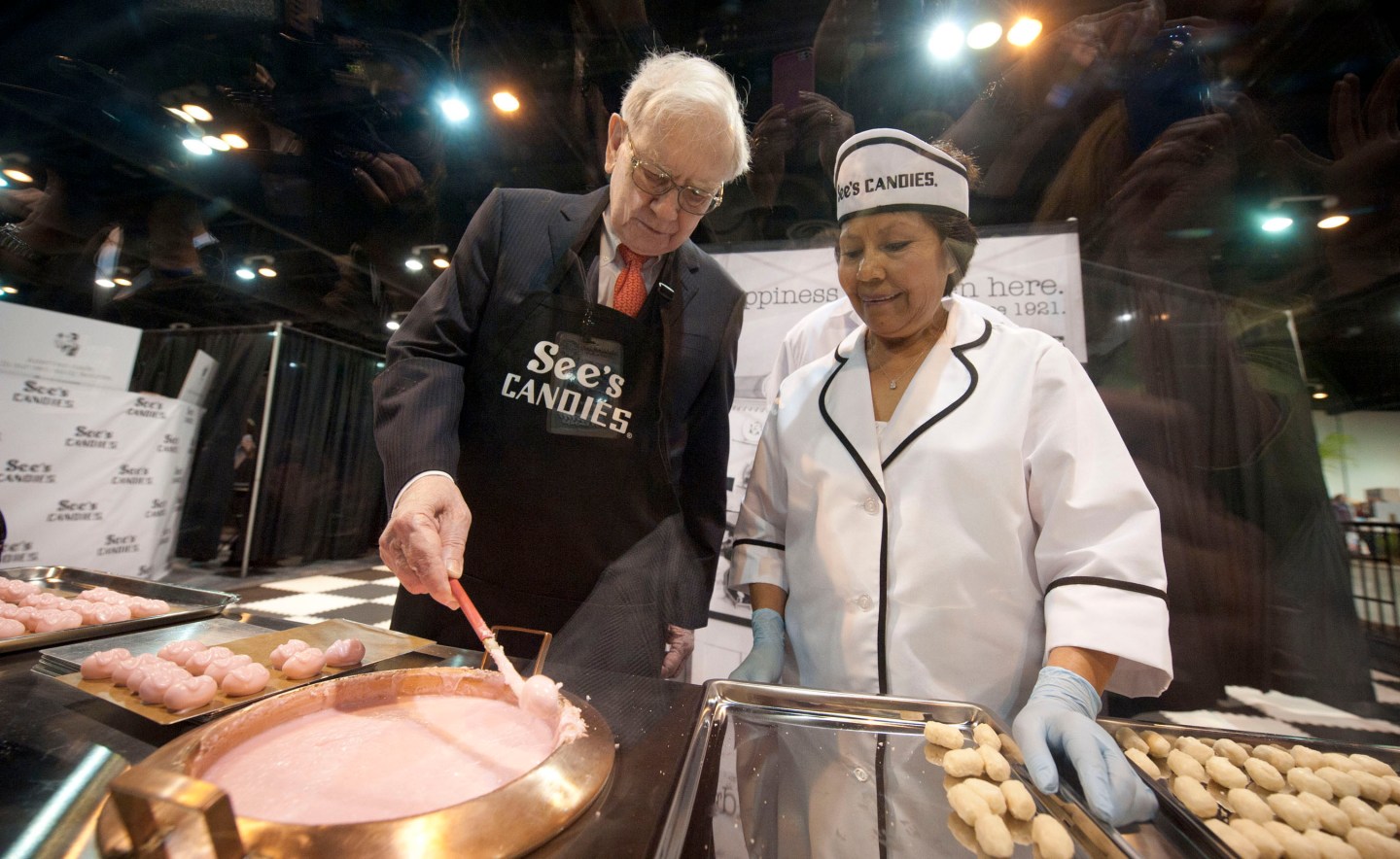 Candy for Breakfast?: Prior to the start of Berkshire Hathaway's 2013 annual meeting, Chairman & CEO Warren E. Buffett makes some coconut bon bon treats in the See's Candies exhibit. With him is Victoria Melena, a 40-year-employee of See's Candies. Buffett acquired See's in 1972.(PRNewsFoto/See's Candies) THIS CONTENT IS PROVIDED BY PRNewsfoto and is for EDITORIAL USE ONLY**
Photograph by AP

Sometimes when Warren Buffett loves a product—See’s Candies and Dairy Queen ice cream, to name two—he buys the company. Or he voraciously acquires shares in the business—as he’s done with Coca-Cola (KO), to the tune of $16 billion.

So it’s hardly surprising that Buffett, who eats Utz Potato Stix as if a famine could imminently wipe out the world’s potato supply, has considered buying the company that sells them. The Berkshire Hathaway CEO told Fortune this last week, and when I wrote about it last week in a story about Buffett eating “like a six-year-old,” little-known Utz Quality Foods of Hanover, Pennsylvania, got besieged by acquisition rumors.

“Believe me, we’re not for sale,” insists Utz CEO Dylan Lissette, who is generally so media-shy that he doesn’t even issue press releases for major news about the company. But with Buffett going public about his affection for Utz, Lissette is game to let a few secrets of the snack maker’s success out of the bag. First and foremost, by staying private, he says, “You actually get to invest the way you’re supposed to invest. It’s not about short-term results.”

Founded in 1921 in William and Salie Utz’s tiny kitchen, Utz started as a simple potato-chip company and is now a producer of a broad range of snack foods: pretzels, popcorn, cheese balls and, yes, chips in 395 different flavors and iterations including Crab and new Yuengling BBQ. Last year, Utz produced 150 million pounds of snacks in its 11 manufacturing plants and brought in $561 million in revenue. That makes the company a peewee compared to the snack market leader, PepsiCo’s (PEP) Frito-Lay North America (2014 revenue: $14.5 billion). But Utz, which employs 2,500 people, earns healthy profits that it constantly puts back into the business, without fear of reprisal by activist shareholders. “We’ve grown because we have the ability to reinvest,” says Lissette.

Now in his 20th year working for Utz, Lissette stumbled into the business as a college student at George Washington University in Washington, D.C. He fell in love with the owner’s daughter, who was going to law school at GW. Mike Rice, the grandson of Utz’s founders, is now Lissette’s father-in-law and executive chairman of the company. Lissette, who started out running registers in Utz outlet stores in 1995 and climbed the ranks through sales and marketing, became president and COO three years ago and moved up to chief executive last year.

Lissette, 43, and his wife, Stacie, own a minority piece of the business, while Mike and Jane Rice own the majority. The family dynamic is healthy. “We have a very small number of shareholders, and that makes us very agile and much more competitive,” says Lissette. “We don’t have to go through lengthy approval processes.”

For instance, two years ago, Utz spent aggressively to expand across the south, where Lissette believes future Utz customers are migrating. “We went from zero to 60,” he says. “We’ll probably lose money in the market for five years. It’s a long-term investment.”

Utz has also expanded by acquisition. In 2011, Utz purchased the Dirty and Zapp’s brands of potato chips because the same “craft” trend that altered the beer market has hit the snack market. “People want products that are interesting,” says Lissette, who was attracted to the “gourmet deli image and Cajun crawdaddy voodoo” heritage of the products. In 2012, Utz bought Bachman, known primarily for pretzels, but, says Lissette, “they have a great cheese curl brand, Jax.” And a year ago, Utz acquired a brand called Good Health to become more relevant in the good-for-you category—”which is on fire,” he says.

You won’t find Good Health products on the Utz website “because we don’t want to tout that it’s owned by people like us.” The Utz CEO explains: “Imagine if Smashburger were owned by McDonald’s (MCD), or your favorite craft beer were owned by Anheuser-Busch (ABI).” Founded by a French entrepreneur in North Carolina, Good Health is now based in San Diego and operates independently from Utz, which provides capital and production and distribution capabilities. With Utz’s help, Good Health’s sales grew 33% in the past year.

Neither Lissette nor anyone else in Utz management was looking for an outside investor when Buffett got interested in the company in 2010. But an odd thing happened. Lissette’s twin brother, Jamie, sent a letter to Buffett after a plan to merge Utz with Snyder’s, a rival a few miles down the road in Hanover, hit the skids. The FTC blocked the pending merger, and Utz and Snyder’s (LNCE) nixed the deal. “Dear Mr. Buffett, I write on behalf of my twin brother…,” wrote Jamie Lissette, who is the family’s true money guy and the founder/CEO of Hammerstone Markets, which operates a news and analysis service for institutional traders.

Buffett looked at Utz’s numbers and contemplated buying the company, but he says, “Unfortunately size was the issue, and it never went anywhere.”

Between nibbles of his Utz PotatoStix (“I have a can in my lap and a Coke on my desk. I’m having my lunch.”), Buffett directs me to his just-released letter to shareholders in the Berkshire Hathaway annual report. “I say that we’re looking for companies with $75 million in pretax earnings and preferably a whole lot more, which is what you need to make a dent on $350 billion of market value.” That sum—well, actually $362 billion—is the stock-market capitalization of Berkshire Hathaway (BRKA).

“People would have to eat an awful lot of potato sticks to make a dent in that,” Buffett says.

So, it looks like Utz will keep growing on its own—Lissette says he thinks $1 billion in revenue is doable in five years. As for Buffett, he’s perfectly content shelling out $3.98 for his 15-ounce cans of Utz Potato Stix, without ever owning the company.