Why Chief Justice Roberts will save Obamacare again 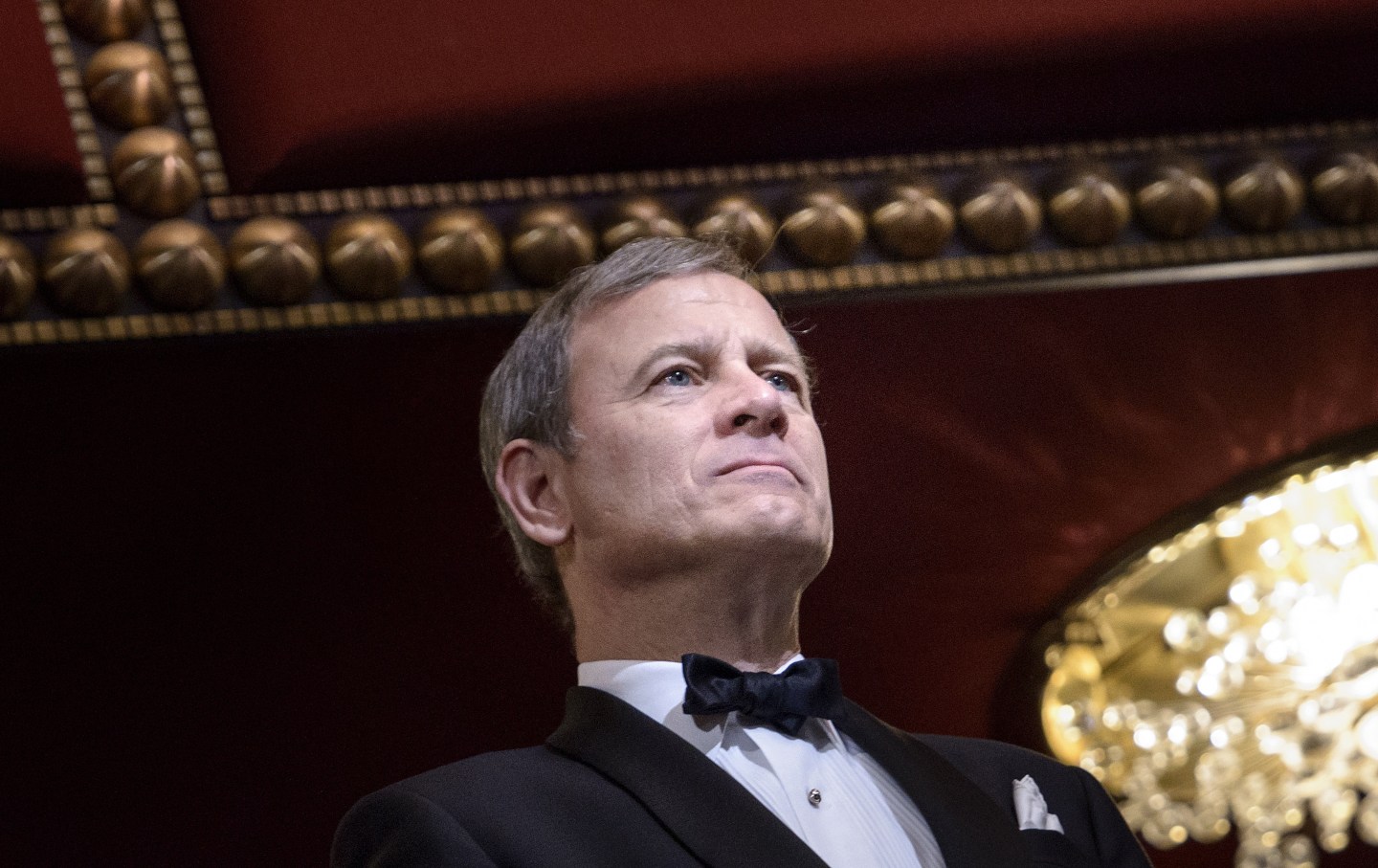 Chief Justice of the US Supreme Court John Roberts listens during the 37th Kennedy Center Honors at the Kennedy Center December 7, 2014 in Washington, DC. Artists from various mediums were honored for their contribution to arts in the United States. AFP PHOTO/Brendan SMIALOWSKI (Photo credit should read BRENDAN SMIALOWSKI/AFP/Getty Images)
Photograph by Brendan Smialowski — AFP/Getty Images

While the Obamacare challenge being argued before the U.S. Supreme Court Wednesday is not an easy case, it does hinge upon an inescapably far-fetched claim—one that, if it prevails, will cause deep, lasting damage to the court’s credibility in the eyes of about half the nation’s population.

The challengers’ central argument in King v. Burwell is that the Affordable Care Act—the signature achievement of the Obama Administration and the most significant social legislation in a generation—must be given an interpretation that no legislator, no analyst, no journalist, and no pundit ever anticipated, aloud or in print, prior to its passage.

If accepted by the Court, this reading will immediately render the care provided by the Affordable Care Act unaffordable to about 7 million enrollees in at least 34 states. It would then likely force many health insurers to withdraw from the program (due to erroneous actuarial assumptions), while forcing those remaining to raise their premiums, in turn forcing still more enrollees to drop out, in turn forcing further premium hikes, and so on, in what health care economists refer to as a “death spiral.”

There appears to be no dispute that the whole notion that the law might be read in the fashion now being urged was stumbled upon for the first time by a Greenville, S.C., employment benefits attorney several months after it came into effect.

He gave a speech about it before the American Enterprise Institute in December 2010. Lawyers present, who were unbendingly opposed to the Affordable Care Act, then took the argument, wrapped it in a lawsuit, and placed it in a queue of court challenges to be launched in the event that the original constitutional attack on the law failed—as it did in June 2012.

The best evidence the challengers have mustered suggesting that anyone really intended the law to behave in the self-defeating fashion being urged are two off-handed, videotaped comments that the economist Jonathan Gruber made in January 2012, about two years after the law passed. Gruber acted as a health care consultant for the Obama Administration at the time that drafts of the law were being written. The challengers’ briefs, and the 21 amicus briefs in support, collectively site Gruber’s comments 126 times, by my count.

As soon as his remarks became the subject of public scrutiny, a puzzled Gruber disavowed them, saying that he didn’t recall exactly what he’d meant at the time. He averred that he’d clearly never subscribed to the interpretation of the law now being advanced by its challengers, as one could tell from the fact that all the economic modeling he performed during the run-up to its passage was premised on the conventional, contrary assumptions.

Later, when the Gruber videotapes were pored over in their entirety, more evidence emerged that, indeed, his remarks may well have been taken out of context. Several conservative commentators have since distanced themselves from the claim that Gruber’s remarks provide support for the arguments being advanced in King. (I cannot recall any comparable instance in which a statutory construction case hinged so heavily on the ambiguous, casual, disavowed, post-enactment comments of a non-legislator.)

The dispute arises from the following statutory setup. The law contemplates that its beneficiaries—low and middle-income people who aren’t insured through their employers and make too much money to be eligible for Medicaid—will obtain their coverage from health insurance marketplaces called exchanges.

The health insurance purchased on those exchanges is rendered affordable by the fact that the law makes lower income people eligible for tax credits. (The government pays the credits in advance, directly to the insurer, so the enrollee experiences them in the form of lower premiums.)

The statute’s provisions on eligibility for these crucial tax subsidies—which appear under the rubric, “Affordable Coverage Choices for All Americans”—do not hint that any eligibility distinctions might be drawn based on the state in which a citizen lives. (See Brief of HCA, Inc., p. 28.)

The source of the dispute lies elsewhere. It begins with certain contradictory statements the law makes about the exchanges. One provision mandates that every state “must” set up an exchange. But a later section contradicts the first, saying that states can elect not to set up an exchange, in which case federal officials “shall . . . establish and operate such Exchange within the State.”

Then, in a technical section of the law that defines how the amount of each tax subsidy is to be computed, there lurks either a big surprise or an unfortunate bit of drafting imprecision. The sum is to be calculated based on the number of months that the citizen spends enrolled in a plan purchased “through an Exchange established by the State.”

According to the challengers, those words mean that only those who buy insurance on an exchange literally “established by [a] state”—and not on an exchange created by federal officials—are eligible for the crucial tax credits. As a consequence, lower-income people in the 34 (mainly red) states that chose not to set up their own exchanges are out of luck, they argue, ineligible for affordable insurance.

Defenders of the law as it has been interpreted until now argue that that reading is preposterous. It renders pointless the whole exercise of setting up federal exchanges as a backstop in the event states decline to create one. Prior to the law’s passage, they protest, every estimate of the law’s impact and costs—including one performed by the Congressional Budget Office in November 2009—assumed no distinction in benefits provided by state- and federally-run exchanges.

Defenders of the law think it’s obvious that the federal exchanges were meant to stand in the shoes of the state exchanges for all purposes. In an opinion rejecting the challengers’ argument in King last July, Judge Andre Davis of the U.S. Court of Appeals for the Fourth Circuit provided this homey analogy: “If I ask for pizza from Pizza Hut for lunch but clarify that I would be fine with a pizza from Domino’s, and I then specify that I want ham and pepperoni on my pizza from Pizza Hut, my friend who returns from Domino’s with a ham and pepperoni pizza has still complied with a literal construction of my lunch order. That is this case.”

The challengers, on the other hand, hypothesize that the statutory scheme was intended to incentivize the states to enact their own exchanges, by threatening to deny their citizens benefits if they didn’t. Congress merely failed to anticipate that so many states would refuse to set up their own exchanges despite the threat, the challengers posit, which is why the whole statutory scheme is now poised to crumble.

The problem with the incentivization theory is that there is no contemporaneous evidence supporting it—and what good is a threat if no one knows you’re making it?

In fact, ten of the red states that chose not to set up their own exchanges, led by Virginia, are now arguing to the Court that if the challengers’ arguments are accepted, they and their residents will have been unconstitutionally sandbagged. The challengers’ interpretation, they contend, “would … violate basic principles of cooperative federalism by surprising the States with a dramatic hidden consequence of their Exchange election. Every State engaged in extensive deliberations to select the Exchange best suited to its needs. None had reason to believe that choosing a federally-facilitated Exchange would alter so fundamental a feature of the ACA as the availability of tax credits.”

The closest thing to any corroboration for the incentivization theory are Gruber’s previously referenced, post-hoc, off-the-cuff, disavowed comments.

If the challengers do end up prevailing, it may have less to do with Jon Gruber than with Senator Ted Kennedy. When Kennedy died in August 2009, Democrats lost their filibuster-proof majority in the Senate. That loss was cemented when Republican Scott Brown won a shocking victory at the January 2010 Massachusetts special election to determine his successor. (See Brief of John Cornyn, et al, p. 19.)

At that stage, there were two rather different Obamacare bills pending, one in the House and one in the Senate, and the ordinary course would have been for the bills to be reconciled in conference and then repassed by both houses.

But without their 60-vote majority, Democrats had to scrap that plan. Instead, the unpolished Senate version had to be accepted as final, with only minor changes possible through a budget reconciliation process.

Thus, to do an end-run around the Senate’s filibuster rule, Democrats decided to content themselves with an imperfect draft. Now they’re stuck with it, the challengers argue. The provisions of that law are unambiguous, they claim, so the Court must read them literally, regardless of the consequences.

And that might be how the Court rules. To me though, that sounds more like political payback than statutory construction.

Three days after the Court voted to hear the King case last November, I wrote that Obamacare “hangs by a thread” and that the case “could be the next Bush v. Gore.”

I still hold those sentiments. But whereas I thought then that Chief Justice Roberts would probably vote with the challengers, I now suspect he’ll vote against, providing the necessary margin to uphold the law in its current form.

After full briefing, the challengers’ arguments look weaker—and cheekier—than first appeared, and I think Roberts, with his sensitivity to preserving the Court’s limited reservoir of credibility, will see the case in that light.

In addition, and though many commentators have warned against reading too much into last week’s Supreme Court ruling in Yates v. United States, I’m going to disregard their warnings.

Yates involved grouper, not Gruber, but it’s still relevant. There a fishing boat captain who had been caught by a state inspector with a load of undersized fish threw them overboard in an attempt to avoid a civil fine. He was then convicted under a federal felony statute (bearing a 20-year maximum penalty) enacted as part of the post-Enron, Sarbanes-Oxley law. The law had been aimed at penalizing document-shredding of the type Arthur Andersen had engaged in.

Notwithstanding that the statute forbade the destruction of any “record, document or tangible object,” and that fish were unquestionably tangible objects, the Court, in a 5-4 ruling, decided that, in context, the word “tangible” should not be given a literal reading. Chief Justice Roberts joined Justice Ruth Bader Ginsburg’s main opinion, signed also by liberal Justices Stephen Breyer and Sonia Sotomayor, finding that context trumped literalism in interpreting that law.

But when combined with the hyperpoliticized nature of the challenge and the absence of evidence that anyone read the law at the time of its passage in the manner now being urged, I’ll bet on that tea leaf.