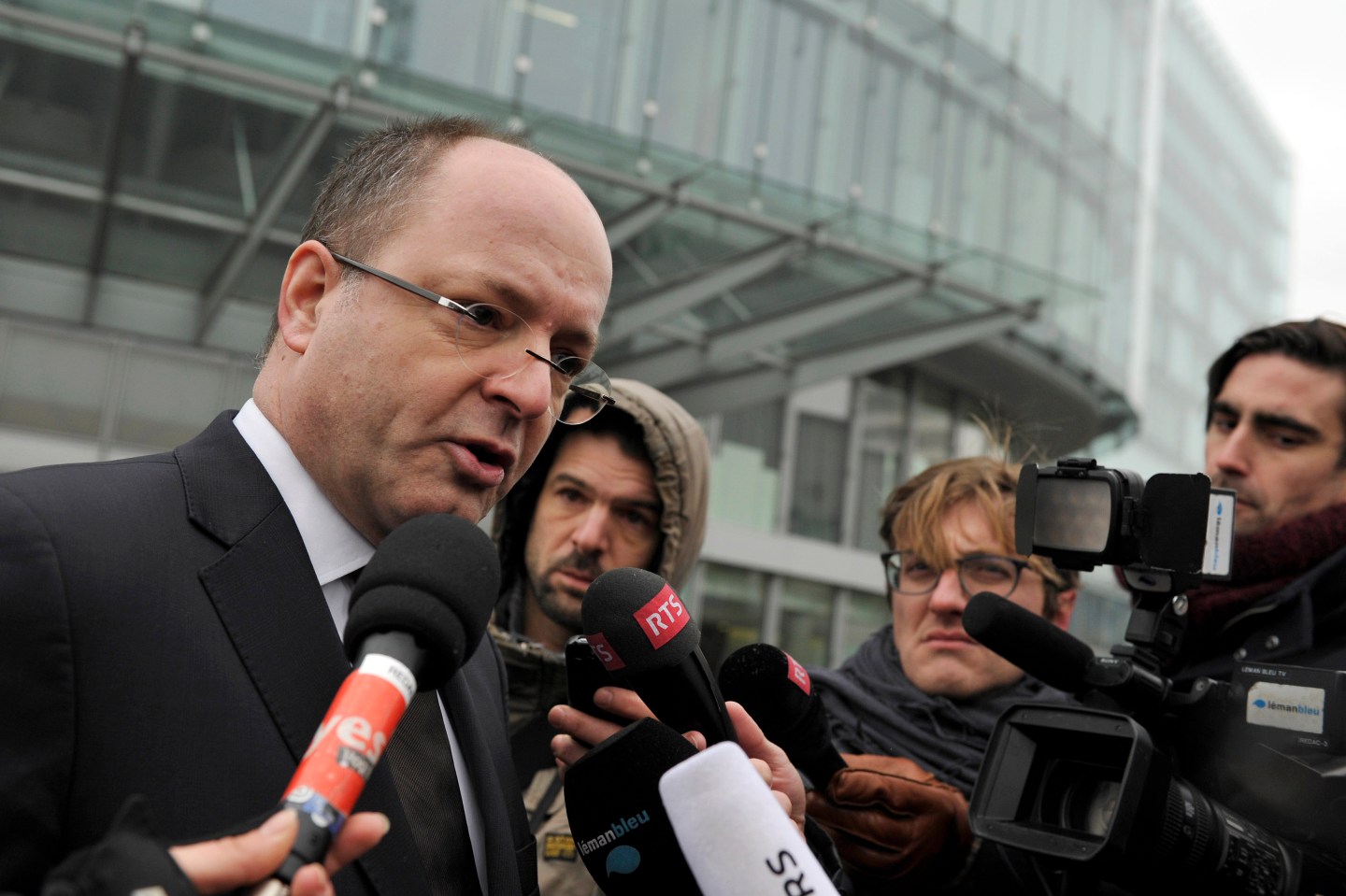 GENEVA, SWITZERLAND - FEBRUARY 18: Geneva Attorney General Olivier Jornot delivers a statement to the press as a search is currently underway in the HSBC offices private bank on February 18, 2015 in Geneva, Switzerland. Swiss prosecutors have started searching offices of the Geneva subsidiary of HSBC bank in an inquiry relating to alleged money-laundering. (Photo by Harold Cunningham/Getty Images)
Photograph by Harold Cunningham — Getty Images

The raid, in connection with an investigation into ‘aggravated money-laundering’, marks the latest twist in a saga that dates back 10 years. It has received a fresh lease of life after revelations in the U.K. press 10 days ago that it may have helped customers to evade hundreds of millions in pounds in taxes over the years.

The allegations have quickly assumed political dimensions in the U.K., which is only three months away from general elections. The left-wing Labour opposition has been quick to point out that Stephen Green, who was chairman of HSBC during the time in question, was afterwards hired by the Conservative-led government as trade minister–even though the government was already aware of the allegations against the bank. (Green is also an ordained vicar in the Church of England, for good measure.)

Labour has also made capital of the fact that there has only been one prosecution against the people named in the leaks since HMRC, the U.K.’s equivalent of the IRS, first got their hands on the materials five years ago.

That plays to a popular narrative in U.K. politics that only the poor are punished for cheating the system.

Materials leaked to the International Consortium of Investigative Journalists and a handful of other news organizations indicated that HSBC aggressively marketed schemes suitable for tax evasion to rich clients across the world, colluded with them in holding undeclared accounts and routinely allowed them to withdraw bricks of cash with no questions asked.

The materials come from a stash of files stolen from HSBC by Hervé Falciani, a former employee and whistleblower. Falciani’s files have already led to criminal investigations in France, Belgium and Argentina.

The Swiss authorities’ action Wednesday, however, is the first to suggest that they regard tax evasion itself as a bigger crime than exposing it. Falciani was indicted in Switzerland in December for industrial espionage and for breaking the law on banking secrecy. Prosecutors have said they are open to trying Falciani in absentia.

“We have co-operated continuously with the Swiss authorities since first becoming aware of the data theft in 2008 and we continue to co-operate,” HSBC said in a statement Wednesday.

The bank has tried to depict the recent storm as little more than muck-raking through ancient history.

“Since 2008, we have fundamentally changed the way HSBC is run, and have established much tighter central control around who are our customers,” the bank said at the weekend, noting that it has shrunk its Private Bank’s client base by 70% since 2007.

HSBC said last year it has increased the number of staff on compliance issues more than fourfold to 6,000. However, not everyone is convinced about the proclaimed cultural change. Not only has it been found guilty of manipulating benchmark interest and foreign exchange rates long after Falciani’s disclosures, another whistleblower alerted HMRC to suspected tax evasion at HSBC Private Bank’s operations in Jersey in the Channel Islands as late as 2012.

One thing is sure: HSBC desperately needs to be able to prove that it has not aided or abetted tax evasion or money-laundering since December 2012. That was when it signed a deferred prosecution agreement with the U.S. after admitting to helping Iran get round sanctions and laundering the profits of Mexican drug trafficking gangs. The $1.9 billion fine it paid was the biggest in history at the time.

Any evidence that it has broken that DPA could lead to it losing its all-important license to bank in the U.S., destroying its status as a global bank overnight. Under the terms of the DPA, HSBC has to cooperate fully with prosecutors on any other investigations and must commit no crimes.