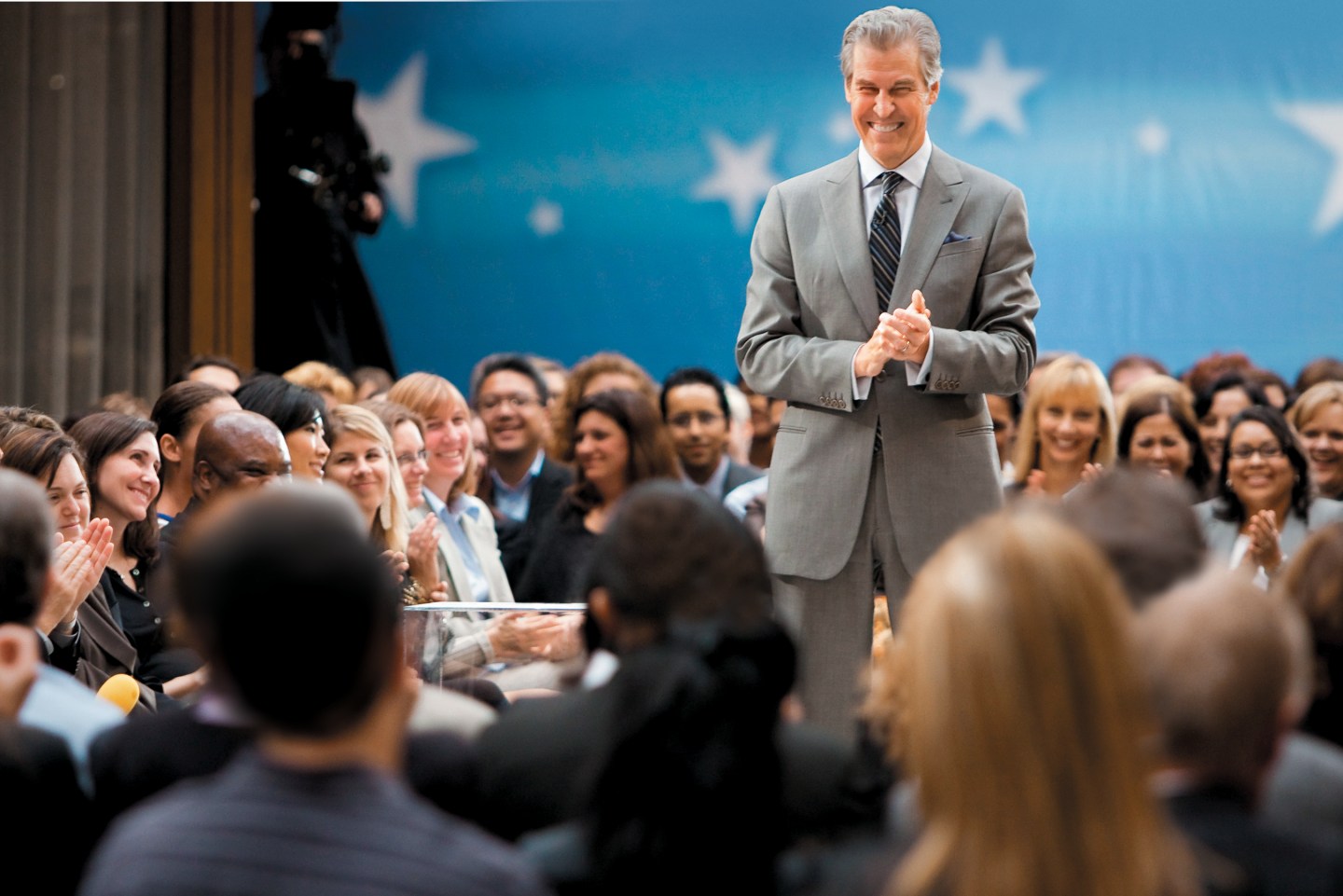 Macy’s CEO and Chairman Terry Lundgren likes to fill his board with members who have diverse perspectives. As the head of a major U.S. retailer, he’s adamant that the board reflects his customer base so he can stay attuned to trends in how different people shop.

What Lundgren looks for in board members hardly sounds radical, but the results have been: Half of Macy’s (M) 12 board directors are women. Last month, when he appointed Leslie Hale from RLJ Lodging Trust to the board, Macy’s reached this milestone. Less than 1% of companies in the Fortune 500 have achieved or surpassed gender parity on their boards, according to a recent Fortune analysis in collaboration with S&P Capital IQ.

Reaching the 50% mark brings Macy’s into a elite group that includes three other companies as of Fortune’s January analysis: Avon (AVP), Xerox (XRX) and TravelCenters of America (TA) (which only has four board members in total). These companies have each demonstrated a serious commitment to changing the male-heavy gender dynamics on corporate boards.

It’s worth noting that Macy’s board diversity extends beyond gender as well — two members are African-American, one is Asian-American and another is Hispanic.

Nearly 30% of Fortune 500 firms have just one female director and 23 have none at all.

“We talk a lot about diversity, but the first criteria is that each and every board member has a unique skill set and experience that they can bring to the board,” said Lundgren in an interview with Fortune. “The women have a lot of choices. They could go on any board because they have lots of demand for their skills.”

The women Lundgren is referring to are powerhouse executives like Deirdre Connelly, the former North American president of pharmaceutical company GlaxoSmithKline, Marna Whittington, the former CEO of Allianz Global Investors Capital, and Joyce Roché, the former CEO and president of Girls Incorporated. Yet a common sentiment among executives with fewer women on their boards is that there are just not enough qualified candidates like Connelly, Whittington and Roché out there.

After all, in the Fortune 500, just 25 CEOs and roughly 18% of directors are women. A lot of boards strongly prefer candidates with prior board or CEO experience, making the pool of female candidates appear very small.

Craig Weatherup, a member of Macy’s board and the former CEO of PepsiCo, said Lundgren has fought hard against the notion that every board candidate must fall into this narrow category. As a member of the nominating and corporate governance committee, Weatherup also has worked tirelessly to ensure Macy’s isn’t solely considering candidates whom he refers to as a part of the “old boys club.”

“Boards that aren’t looking for younger, digitally savvy female and ethnic board members are really going to fall behind. It’s a key part of staying relevant in today’s market,” Weatherup said. “I agree that if you’re just looking for a sitting CEO or a recently retired CEO it is almost impossible. But there is no reason why that stat hold be a limiting criteria.”

Annie Young-Scrivner, an EVP at Starbucks and the president of Teavana, is the epitome of the type of appointment Weatherup is talking about. She joined Macy’s board in 2014, and is a 46-year-old Asian American without any prior public board experience. She is mentored by Weatherup, and identifies personally with the roughly 70% of Macy’s customers that are women. As all retailers react to the shift of shoppers who our now shopping online or researching online before heading into stores, Weatherup said it is important to have young, tech-smart board members like Young-Scrivner to advise the board. “I use my iPad and my iPhone, but I am hardly a digital board member,” said Weatherup, who is 69.

“I don’t feel like I am there because I am a woman,” said Young-Scrivner. “I add a point of view that is different than some of the other board members and that strengthens Macy’s as a company.”

The result of Macy’s push to bring on fresh talent is a board of directors that is high-functioning and robust with talent, said several board members. Lundgren, who has been chairman of the board since 2004, has watched four women get elected by the board and re-elected by shareholders.

Having more diverse voices on his board has “without a doubt become a tremendous advantage” as he tries to navigate a rapidly changing retail model, he said. And for now, the company’s financial performance seems to be responding well to its diverse leadership: the retailer announced raised annual profit outlooks just as several of its main competitors are struggling to lure shoppers to its stores.

Macy’s latest appointment of Leslie Hale represents another example of the retailer looking beyond the traditional experiences of board directors to bring in a diverse perspective. Hale, a 42-year-old African American, is the youngest member of Macy’s board and had no prior board experience. Yet Lundgren is interested in Hale because of her financial acumen: At RLJ Lodging, she serves as chief financial officer.

“I was drawn to Macy’s because I could add value both from my professional experience as a public company CFO in the hospitality industry and from my personal experience as a Macy’s shopper with a young family,” said Hale on the recent appointment. “I felt an immediate fit with the board members I met, all of whom had different backgrounds and experiences.”

While Young-Scrivner acknowledged that Lundgren has led by example when searching for diverse board candidates, she added that quality recruiting firms are also essential. Most executive search firms would only speak on background regarding how they recruit for diverse talent, but it’s clear that it takes an increased attention on the issue to bring candidates from different background to light. While companies like Macy’s have made diversity a concrete criteria in their last few board searches, not all companies outline to recruiters that difference is a priority.

“By sitting in the board meetings, it becomes very clear that the Macy’s board is comprised of extraordinary leaders with really diverse backgrounds,” said Deirdre Connelly. “It’s important to highlight that so that other companies can take the same chances on people that perhaps are not CEOs today, but will be CEOs tomorrow.”