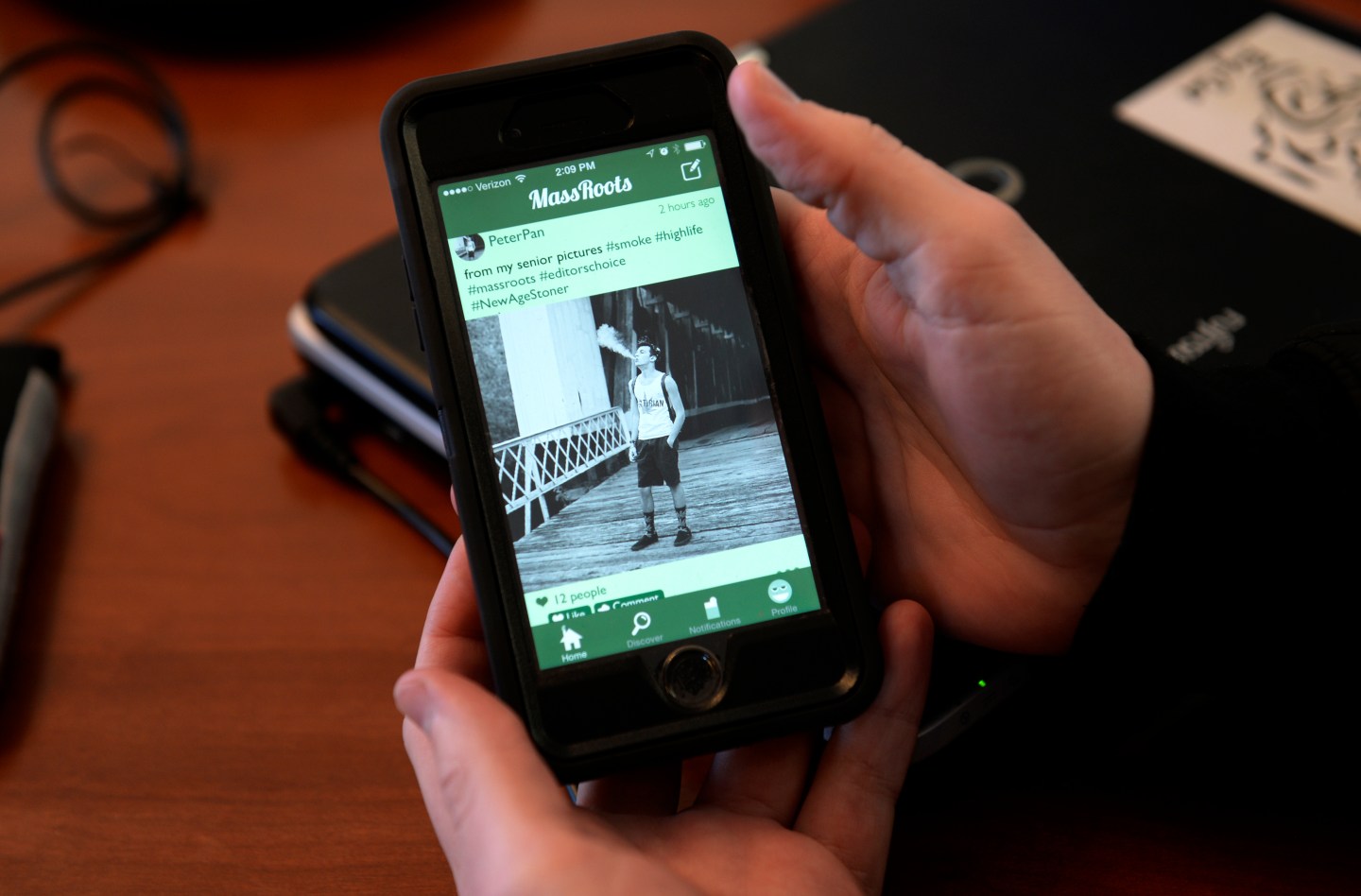 DENVER, CO. - JANUARY 22: Isaac Dietrich, CEO of MassRoots, displays his app at his office in Denver, CO on January 22, 2015. The companies cannabis oriented social networking app, MassRoots, was pulled from Apple's App Store in November after 14 months. "Apple's policies are stifling innovations in the cannabis industry to a greater extent than the federal government," Dietrich said. (Photo By Craig F. Walker / The Denver Post)
Photograph by Craig F. Walker — The Denver Post/Getty Images

Apple has lightened up on restrictions that once banned cannabis-focused social networking apps from its App Store.

The tech giant reversed course Thursday night by making MassRoots, a social network for cannabis lovers, available on the iOS App Store a little over three months after banning the site’s app. MassRoots first became available through the App Store in 2013, but Apple decided to pull the app last month due to conflicts with company guidelines banning “apps that encourage excessive consumption of alcohol or illegal substances.”

To avoid running afoul of that App Store rule, MassRoots agreed to add a geo-restricting function that only makes the app available in the 23 states that have legalized medical marijuana, the social network said Friday in a blog post. That tweak apparently swayed Apple, as the app was once again available for download from the App Store as of Friday. (MacRumors noted last night that it was possible to bypass the geo-restrictions by signing up for a MassRoots account through the company’s website before logging into the app, though MassRoots founder Isaac Dietrich later said his site was working to close that loophole by Friday.)

With the return of MassRoots to the App Store, iOS users are once again free to use their Apple devices to access a social network that connects them with nearly a quarter-million of their fellow pot enthusiasts. The site is similar to Instagram and Twitter in that people can find other marijuana users in their area, and follow them, while posting their own messages, pictures and videos.

Apple’s (AAPL) decision also comes after MassRoots mounted a public campaign looking to convince the company to change its policies on marijuana-themed software. The social network said Friday that thousands of users sent Apple emails asking it to lift the ban on MassRoots. The app’s creators also sent Apple CEO Tim Cook a letter co-signed by the National Cannabis Industry Association as well as by pot-focused investment firm ArcView Group and a few dozen marijuana businesses. The letter suggested that “strong regulations are more effective than prohibitionist policies.”

In Friday’s blog post, MassRoots’ creators thanked the app’s users and Apple while also promising strict compliance with Apple guidelines and government regulations. “We do not take this task lightly,” the company said.

Apple did not respond to Fortune’s request for comment, but a cursory search of the App Store reveals a wide selection of marijuana-focused apps. These include apps for Yelp-like services such as Leafly and WeedMaps, which help users find pot dispensaries and review specific cannabis strains, while cannabis culture magazines High Times and Cannabis Now both have their own apps as well. The App Store even caters to marijuana gamers, with mobile games that let users grow and sell their own virtual weed crops.

MassRoots also isn’t the only company whose app looks to connect marijuana users. Earlier this month, Time reported that visitors to the App Store can download a dating app called High There! that is designed like Tinder, but which caters only to love-seekers who are also cannabis-friendly.

Despite the crowded market for marijuana-related apps, Apple’s decision is a big one for MassRoots. MassRoots remained available to Android users despite the temporary Apple ban, but Apple has more than a 40% share of the U.S. smartphone market, so the company’s decision to ban the social network effectively cut off MassRoots from a large number of potential users.

The app claims roughly 250,000 users, and Dietrich says there is no other marijuana-focused social networking site with more than 10,000. Dietrich told Fortune that MassRoots closed a fundraising round of about $1.4 million in January, for a valuation of $25 million. While the site is not yet seeing any revenue, Dietrich said MassRoots is currently lining up advertisers and he expects the company could start seeing roughly $1 million in monthly revenue within two years.

Clearing this obstacle with Apple — not to mention the resulting publicity — could pave the way for more investors to get involved, and Dietrich said he expects to open a second funding round next week. He’s not yet sure of the upcoming round’s ultimate value, but he expects it to easily exceed the first round of fundraising based on Apple’s willingness to host MassRoots’ app as well as the growing willingness among investors to put money into the cannabis industry. Recently, PayPal cofounder Peter Thiel’s Founders Fund joined a $75 million funding round for Privateer Holdings, which owns Leafly and other cannabis-related brands. “We feel there’s significant upside to our valuation,” Dietrich said.