TransAsia disaster: at least one engine failed after take-off 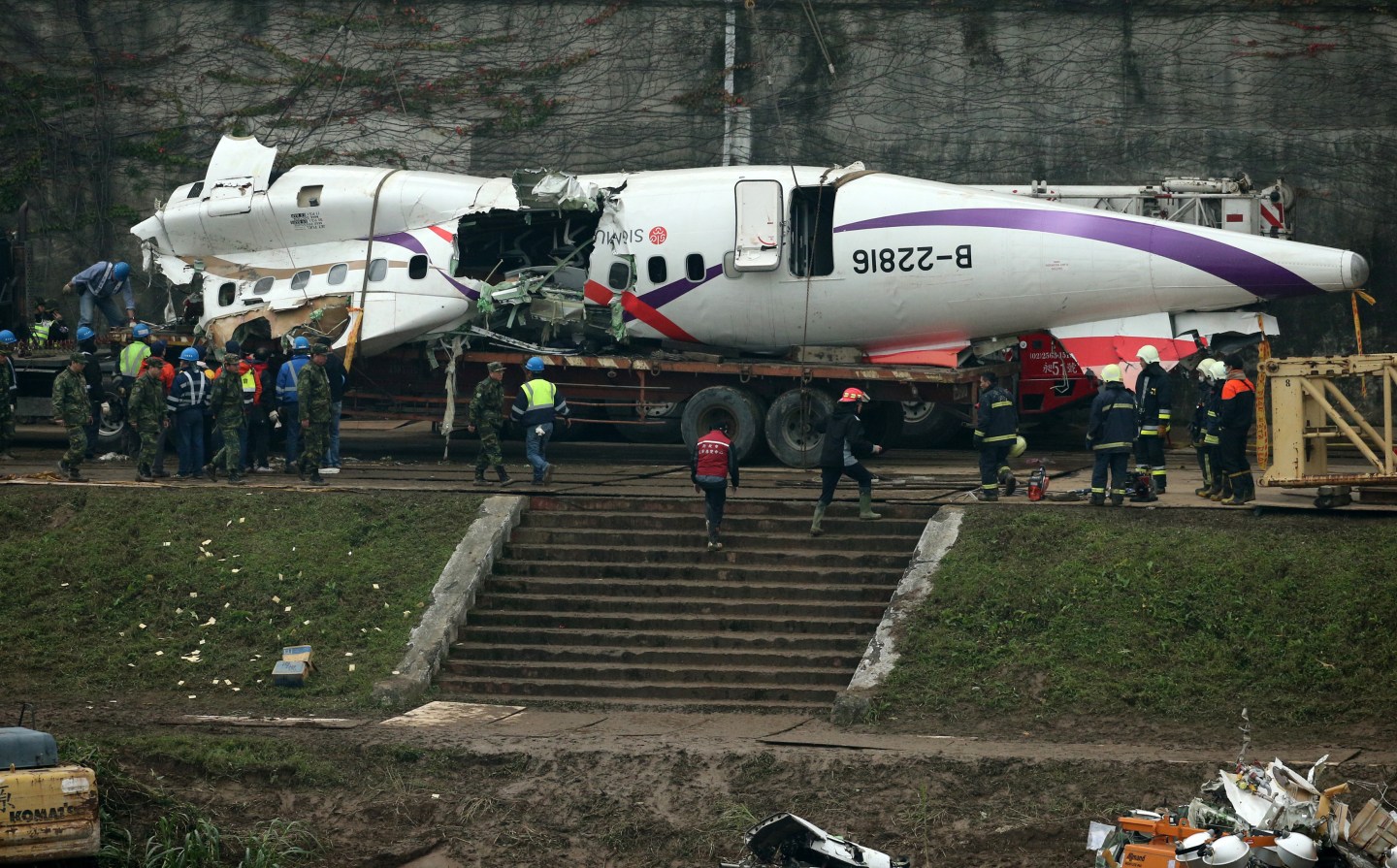 TAIPEI, TAIWAN - FEBRUARY 05: (CHINA OUT) Emergency workers clear the debris a day after the TransAsia Airways ATR 72-600 turboprop airplane crash on February 5, 2015 in Taipei, Taiwan of China. The plance, caught in dramatic video, crashed into the Keelung River shortly after taking off from Taipei Songshan airport February 4. Thirty-two people are confirmed dead, with 11 still missing. Fifteen people were pulled from the river alive. (Photo by ChinaFotoPress/ChinaFotoPress via Getty Images)
Photograph by ChinaFotoPress via Getty Images

A TransAsia plane that crashed into a river in Taipei, Taiwan, killing 35 people, failed to produce enough thrust after take-off, authorities said on Friday, revealing one engine was turned off and restarted.

Flight GE235 was carrying 58 passengers and crew when it lurched nose-up between buildings, clipped an overpass and a taxi with one of its wings and then crashed upside down into a shallow river on Wednesday. Fifteen people survived.

The blackbox data and voice recorders of the two-engined aircraft showed that the plane warned five times of stalling before the crash in the center of Taipei, Aviation Safety Council officials told a news briefing.

The right engine entered a state called “auto-feather”, in which it reduced thrust to the propeller, Thomas Wang, managing director of the council, said.

The flight crew then reduced acceleration to the left engine and then attempted to restart it, but it did not gain enough thrust. He did not give a reason for the restart.

“The first engine experienced a problem 37 seconds after take-off at 1,200 feet,” Wang said.

He said the pilot had announced a “flameout”, which can occur when fuel supply to an engine is interrupted or when there is faulty combustion, but there had not been one.

“The flight crew stepped on the accelerator of engine 2 (righthand side)… The engine was still operating, but neither engine produced power.”

The pilot, hailed as a hero for his actions in the final moments, was still holding the joystick in the cockpit when his body was found, media reported on Friday.

The pilot, 42-year-old Liao Chien-tsung, has been praised by Taipei’s mayor for steering the plane between apartment blocks and commercial buildings before ditching the stalled aircraft in a river.

The bodies of Liao and his co-pilot were retrieved from the almost-new turboprop ATR 72-600’s cockpit still clutching the joystick, with their legs badly broken, investigators said.

“They were still trying to save this aircraft until the last minute,” media quoted unidentified prosecutors involved in the crash investigation as saying.

Eight people are still missing. Aviation officials have said they have not given up hope of finding them.

The plane took off from Taipei’s downtown Songshan airport and was bound for the Taiwan island of Kinmen. Among those on board were 31 tourists from China, mainly from the southwestern city of Xiamen.

Taiwan’s aviation regulator has ordered TransAsia and Uni Air, a subsidiary of EVA Airways Corp, to conduct engine and fuel system checks on the remaining 22 ATR aircraft they still operate.

The crash was the latest in a string of Asian air disasters.

Indonesia has expanded its search for bodies of AirAsia Flight QZ8501 that crashed into the Java Sea in December, killing all 162 people on board.

After a lull in search and recovery efforts, more bodies and wreckage were found in the past few days off the coast of the Indonesian island of Sulawesi. A total of 96 bodies have been found.