Zappos is bringing Uber-like surge pay to the workplace 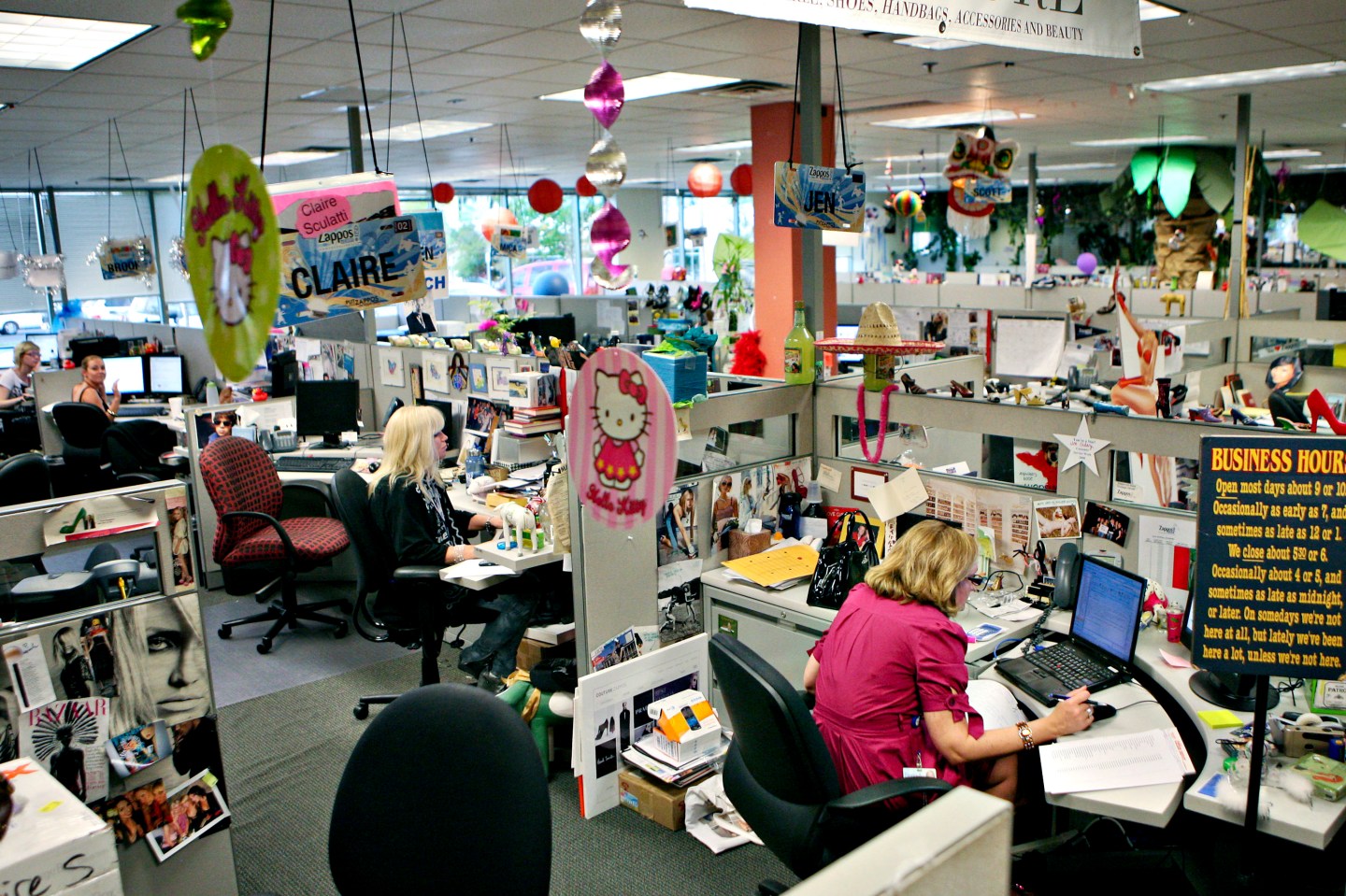 Workers sit at their desks in the couture department at the offices of internet retailer Zappos.com Inc. in Henderson, Nevada, U.S., on Tuesday, April 26, 2010. Amazon Inc. agreed to acquire Zappos.com in July 2009 for around $888 million, its biggest acquisition, adding more than 1,000 shoe and apparel brands. Photographer: Ronda Churchill/Bloomberg via Getty Images
Photograph by Ronda Churchill — Bloomberg via Getty Images

In September, Zappos chief executive officer Tony Hsieh was wandering the halls of the online retailer’s Las Vegas headquarters and noticed that the customer service center’s walls were covered—floor to ceiling—with sheets of printer paper.

Hsieh had stumbled across the scheduling method for the center’s 540 employees, who respond to the 10,000 customer inquiries the online retailer receives by phone, email, and web chat everyday. Once a quarter, employees choose their shifts in order of seniority, by writing their names on sheets of paper listing the shifts they want.

“It was like how I signed up for college courses before I could do it on a computer,” says Adam Goldstein, a senior product manager at Zappos Labs, the company’s division in San Francisco that focuses on innovation and digital technology. The sign-up “was kind of a painful process, and [employees] were choosing when they’re going to work—it’s a big deal.”

The old-school, paper-and-pencil process didn’t sit well with Hsieh, who is known for implementing Zappos’ unorthodox, non-hierarchical holacratic organizational structure and his devotion to customer service. (The Amazon-owned company aims to answer 80% of customer inquiries within 20 seconds.) The manual sign-up process—which Hsieh considered a waste of time and manpower—accelerated the company’s plans to overhaul the customer service scheduling system.

Hsieh was not available for an interview for this article, but as Goldstein recalls, he asked the Labs team, “‘How do you feel about looking at something like Uber for the call center?’ It was definitely not something we’d actively been thinking about,” Goldstein says.

That conversation sparked the development of what is now known as Open Market—referred to as “Om” internally—an online scheduling platform that allows workers to set discretionary hours and compensates them based on an Uber-esque surge-pricing payment model: hourly shifts with greater caller demand pay higher wages. The goal of Open Market was to create a “free-market system,” Goldstein says, and strike a balance between the rigidness of customer service center scheduling and what the company says is its dedication to giving employees time to pursue other opportunities at Zappos, like extra training. “We wanted the [customer service center employees] to work more flexible hours, eventually 100% flexible, and reward them based on how much or how little customers need them to work,” he says.

To build Open Market, Goldstein and a small team from the Labs division learned all about Zappos’ customer service center—how it forecast call volumes, which were the most important shifts to cover, how workers bid on shifts, and the processes used when emergencies, like a blizzard on the East Coast, cropped up.

After a demanding 10-week development period—“one of the craziest things I’ve ever done,” Goldstein says—Zappos rolled out Open Market’s pilot during the company’s busiest time of the year: two days after Thanksgiving and two days before Cyber Monday. Zappos wanted to adopt Open Market quickly, and “there’s always an excuse for it not being the right time,” says Rob Siefker, a customer loyalty team senior director. That said, “I’d be lying if I said I wasn’t nervous about testing it during the holidays.”

Zappos limited the Open Market pilot to the 213 employees who work the customer service center’s phones. Everyone received at least 10% flexible time, so during a 40-hour week, employees would have four hours to play with. They could choose to not work during those hours or they could fulfill them whenever they liked by tacking them onto the start or end of a workday or by coming into the office on a scheduled day off.

Employees decided when to work with the help of Open Market’s real-time customer service center metrics algorithm and historical data that showed customer demand, as measured by the wait time of the longest-holding customer, and the accompanying compensation rates. The longer the hold time, the higher the customer demand, the more the employees working that shift would get paid.

Demand is especially high in the early hours of weekdays, when customers on the East Coast are placing calls before starting their workdays. Those calls and online inquiries land in Zappos’ Las Vegas call center before dawn, when few workers want to be on the clock. Employees manning the customer service center during those hours will earn a higher hourly rate. By contrast, workers will receive less pay if they work on the weekends, when Zappos receives fewer customer inquiries.

Zappos aims to fully integrate compensation for all customer service center employees—who earn an average of $14.50 per hour—into the Open Market model and pay them a range of hourly rates based on demand. Zappos hasn’t worked out all the legal and benefits kinks yet, so during Open Market’s pilot period, participating employees received points based on shift demand that could be redeemed for raffle tickets for prizes like gas cards, Beats By Dre Headphones, HD televisions, and spa retreats. Employees also earned access to more flextime if they worked hours when call demand was the highest.

The online retailer has long-term plans to integrate Open Market into all of its departments, though they’re still in the fledgling stage, Siefker says. “Other areas [of the company] don’t have the same type of real-time demand as the call center, so we’ll test things out and gather feedback,” he says. “We have to be thoughtful about not coming up with assumptions that will stop us from testing different types of things. We have to be comfortable with failing.”

In Open Market’s first rollout, workers were a little apprehensive at the outset, says Danielle Kelly, whose title at Zappos is Open Market lead link. “People have been learning how it can be a benefit for themselves and for the company. They’re really excited to have the empowerment of [deciding] when they want to work and how long they want to work for.”

Kelly says employees used demand to dictate their schedules but they’re also accounting for personal obligations. “Worker testimonials said it was a lifesaver. They could go home for an emergency and make that time up later in the week,” she says.

On the surface, Open Market appears like “an economist’s dream,” says Maurice Schweitzer, a professor at The Wharton School and co-author of Friend and Foe: When to Cooperate, When to Compete, and How to Succeed at Both. “This is how things should be allocated,” he says.

But market-driven employee motivation poses a risk of deemphasizing characteristics that are rewarded in a seniority-based system, like a worker’s dedication to the job, commitment to the company, and how well they get along with colleagues. The employer-employee relationship becomes more “transactional,” Schweitzer says. Then again, he says, call center employees tend to have short tenures so seniority probably isn’t the right incentive. If money is going to be the main motivator, there must also be a way to maintain quality so that there’s no notion that work that pays less is worth less effort.

“If you look at the market economy, with things like Uber and TaskRabbit,” Schweitzer says, ”we’re moving toward an economy that has [loosened] the chains between the employer and employee, and it’s going to create opportunities for greater efficiencies. But we’re going to have to shake some of the long-held beliefs and relationships that we’ve had.”

Zappos already has a reputation for disrupting traditional notions of the workplace with its adoption of holacracy—an organizational system whose name is derived from the Greek word holon, meaning a whole that’s part of a greater whole. Instead of a top-down hierarchy, the structure stresses self-governance and even power distribution. Indeed, Open Market fits in nicely with the holacratic philosophy because both systems “empower employees,” Siefker says; the systems “gives [workers] choice.”