Why the U.S. should aim for bigger economic plans with India 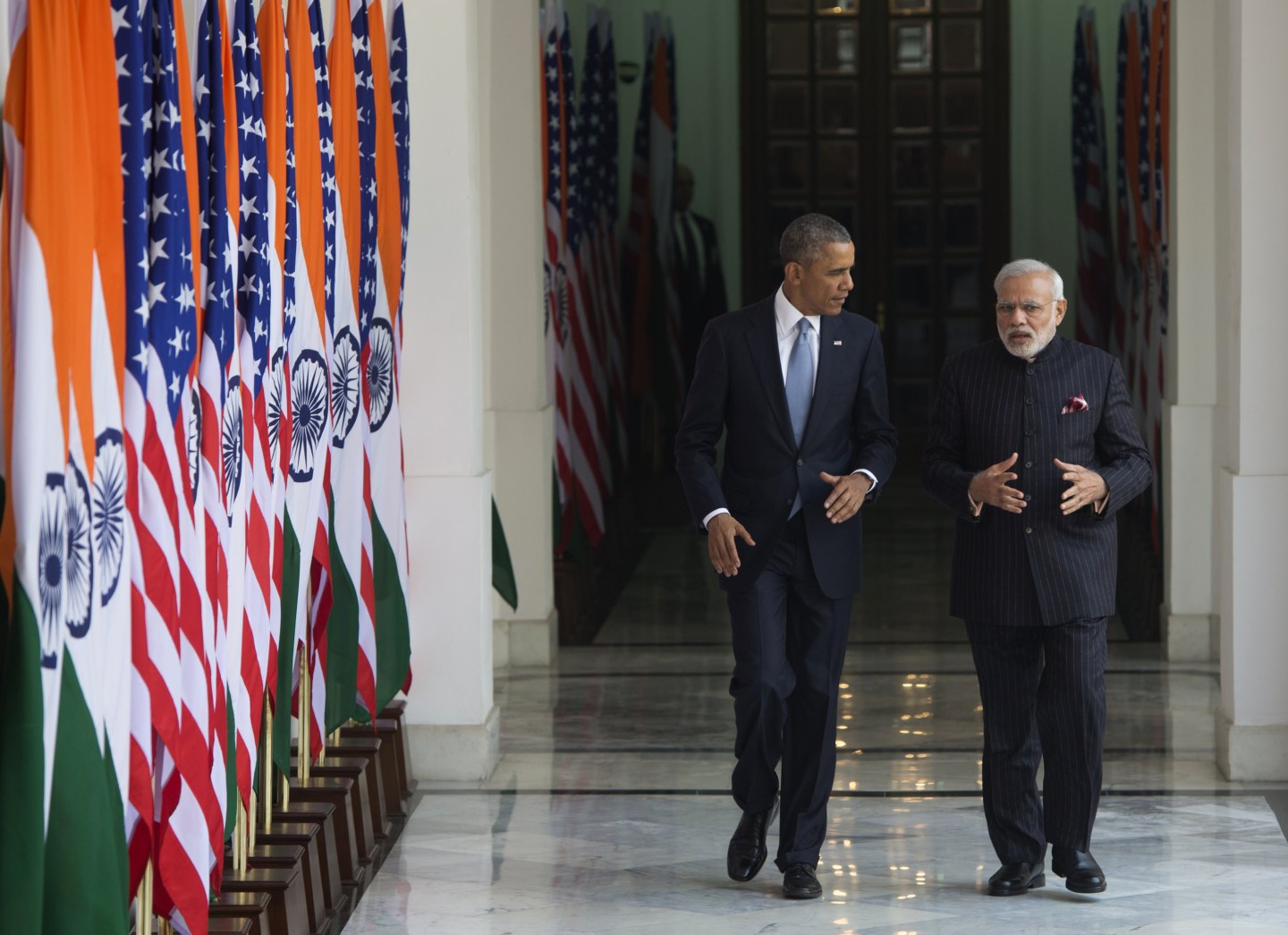 Over the weekend, President Barack Obama and Indian Prime Minister Narendra Modi turned a corner for the United States and India. The two leaders resolved issues in a long-stalled nuclear deal that for years kept U.S. nuclear power companies from doing business in India. Modi also hailed economics as “vital for the success of our strategic partnership.” In Modi, it appears that Washington has at last found a prime minister prepared to transform India’s economic relationship with America and officials should seize the chance to work with a leader focused on economic reform and trade. Washington should respond by hustling to secure India’s membership in the Asia-Pacific Economic Cooperation forum (APEC) and by developing a path for Indian membership in the Trans-Pacific Partnership (TPP) — a move that could potentially increase trade between the two nations.

Narendra Modi was elected prime minister last May on the promise to deliver rapid economic growth to his country’s 1.2 billion citizens. Growth has indeed begun to pick up from below 5% in 2013. Given Modi’s determination—a striking contrast with his most recent predecessor — Obama should make trade and economics a much higher priority. Unlike before, the U.S. may finally have found a partner in India who is able to convince his party and the opposition to enact long-delayed reforms that will benefit India and make it easier to do business in the world’s largest democracy.

In the U.S.-India joint statement released on Sunday, Obama took an important step by “welcoming India’s interest in joining” APEC. This statement ended a long period of inexplicable U.S. silence about an anomaly in the trade group—the absence of India, a major Asian economy. Now, Washington should get moving to convince all the other APEC members to back India before the annual summit in November. By doing so, India would join the U.S., China and 19 other nations in crafting action plans to reduce trade barriers. It’s a low risk gamble on India’s growth and importance to the Asia-Pacific economy.

The president should also signal that if India continues down the path of reform, the United States would welcome the Asian giant to negotiations for the TPP, America’s most important trade initiative in the region. Washington has a clear vision for economic cooperation with the 11 Asia-Pacific countries in the TPP, a sweeping trade agreement representing some 40 % of global GDP, but India is not among them.

Instead, India is participating in an alternative Asian trade negotiation, the Regional Comprehensive Economic Partnership agreement promoted by China that also includes seven TPP participants. India is already a $2 trillion economy, and by some estimates, is on track to become the world’s third largest economy by 2025. The U.S. strategy to further ties with Asia, the center of growth and prosperity this century, surely cannot be complete without more closely integrating U.S. markets with India’s and to deliver growth for both countries. President Obama should commit to India that U.S. and Indian negotiators will develop a roadmap for India’s possible membership in the TPP. In return, Modi will need to pledge more openness to U.S. trade and investment.

To be sure, trade and economics have been components of the U.S.-India conversation for years. But the pace of two-way trade has slowed in recent years to a near-standstill. Two-way trade has hovered below $100 billion since 2012, no longer growing by the leaps of previous years. That makes the $500 billion vision suggested by President Obama and Vice President Biden appear like a mirage on a distant horizon.

It’s true New Delhi can be famously tough in trade negotiations, and that will not likely change. But the U.S. cannot get to the next level of economic ties with India without a plan. Modi wants to accelerate his country’s economic growth and deliver his people from poverty. He sees the U.S. as a country uniquely capable of supporting India’s domestic transformation.

Obama, coming out of this symbolic and important visit to India, should demonstrate that Washington will do its part for India’s future by integrating India into economic regimes focused on delivering growth. That would be an ambitious agenda worth pursuing.

Alyssa Ayres is senior fellow for India, Pakistan, and South Asia at the Council on Foreign Relations. She served as U.S. deputy assistant secretary of state for South Asia from 2010 to 2013.