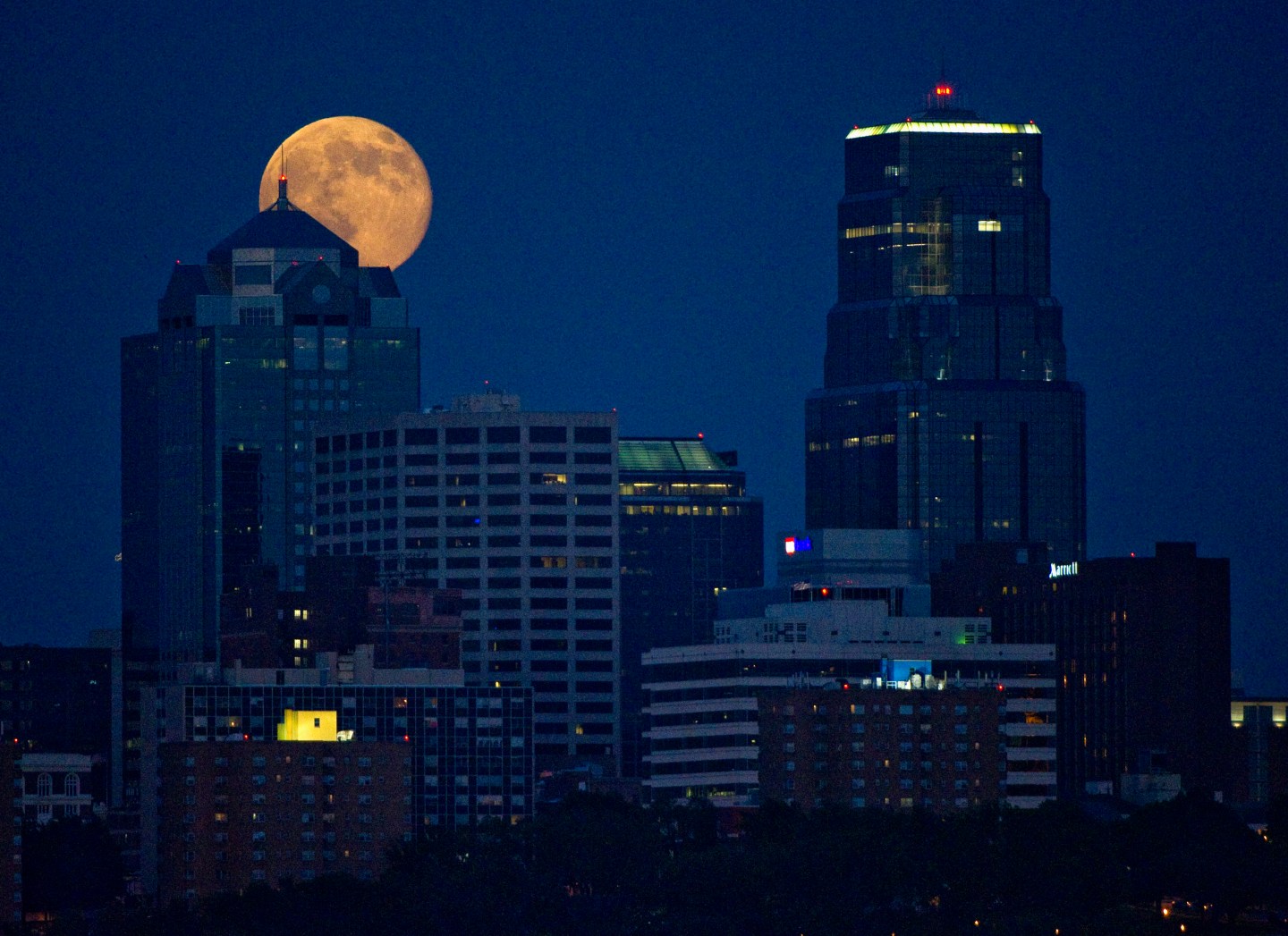 The Supermoon rises over downtown Kansas City, Missouri July 12, 2014. Occurring when a full moon or new moon coincides with the closest approach the moon makes to the Earth, the Supermoon results in a larger-than-usual appearance of the lunar disk. REUTERS/Dave Kaup (UNITED STATES - Tags: ENVIRONMENT SOCIETY CITYSCAPE) - RTR3YC3X
Photograph by Dave Kaup — Reuters

Kansas City dreams of being a city of the future where street lights dim automatically when no one is around to help save on electricity. Sensors would keep watch on water mains and warn city officials when they need to be replaced – long before the pipes break, of course.

In short, Kansas City wants to turn itself into a smart city, the new buzzword used by urban planners and municipal visionaries. The idea is to use more technology to track what’s happening in the city to help improve the quality of life.

“There’s a lot of interest about this project,” said Ashley Hand, Kansas City’s chief innovation officer and one of the evangelists for its smart city push. “We have a lot of tech companies who are reaching out and excited by the possibilities.”

Despite the promise, installing smart city infrastructure can cost millions of dollars at a time when governments have little money to go around. Adding whiz-bang technology doesn’t necessarily mean a better city.

Amy Glasmeier, an urban planning professor at MIT and a smart city skeptic, said research and technology are great, but oversold. Often, smart cities help only one sector of society – people who own smartphones – while low-income residents are mostly left out.

“What we want are cleaner places, safer places, and places with more jobs,” Glasmeier said.

Still, cities across the globe are spending big on technology to track traffic flow, energy use, and pollution. In theory, all the data is supposed to help smart cities save money in the long-run and make their limited resources stretch farther.

In Barcelona, sensors monitor everything from noise, humidity, pollution and traffic congestion. In addition to being used by the city, the data is made available publicly. Businesses have tapped into that information to build apps that show public transit arrival times and let gardeners check which plants to water and when.

Kansas City’s smart city push will come in stages. To start off, city officials partnered with a local start-up incubator to brainstorm a list of problems that needed to be solved. They settled on a to-do list: lights that automatically dim when no one is around, sensors that tell officials when to salt icy roads, and an app that shows locals empty parking spaces using data culled from video cameras.

In addition, the city plans on building interactive kiosks—think giant iPads– along the streetcar line, which will have public service announcements and advertising for local businesses. At the same time the kiosks will collect information about traffic patterns near the streetcar so that officials can use the information for future planning.

In an early phase of construction, Kansas City is installing public wifi along a two-mile stretch of a refurbished street car line. The ultimate goal is to use the online access to connect to any future street lights, video cameras and other devices.

The hope is with all the infrastructure in place, local tech companies will start developing their own apps that use the city’s data. City officials hope that this, in turn, will attract more tech talent and entice bigger companies to partner with the government agencies.

Kansas City officials declined to say how much money they are spending on their smart city push. All they would say is that some of the funds come from private partners. In a sign of the potentially high costs, Barcelona’s initiative cost $230 million in taxpayer funds.

Herb Sih, the co-founder of ThinkBig Partners, the start-up incubator, notes that Barcelona’s project was concentrated in half a square mile while Kansas City’s is along a two-mile strip.

He listed big name companies that said they’d like to test pet-projects if Kansas City builds out smart city infrastructure. But wouldn’t go on the record with specific names because he said that everything is in the early stages.

While Kansas City may sound like an unlikely place for a smart city push, it’s home to several big name companies including Hallmark Cards and H&R Block. The effort comes on the heels of Google’s 2011 decision to roll out it’s high speed internet, Google Fiber, in Kansas City.

Kansas City has already premiered several smart city initiatives, albeit, very basic ones. A 311-call center handles customer service for the entire city. Residents can call or go online to request property inspections or trash pick-ups for items that are too large for regular crews to handle. All issues are logged and tracked so the city can use the information to improve the quality and efficiency of the services.

Kansas City is also pioneering a new strategy to reduce the murder rate that combines social services with data analytics. Using data, the police department along with the University of Missouri-Kansas City, identifies networks of people who are at the most risk of committing homicides. The police department sends out social workers to find them and identify their root problems. In additional, police officers work with community leaders to hold meetings with the groups identified to let them know that if one person in the group commits a murder, the entire group will end up with increased police surveillance.

The homicide rate in the city is at a 47-year low, although it’s impossible to know what role, if any, the data analysis is playing.

“Kansas City is the unknown jewel of the Midwest,” said Hand, the Kansas City innovation guru. “We’re competing in places where people don’t expect us to compete.”