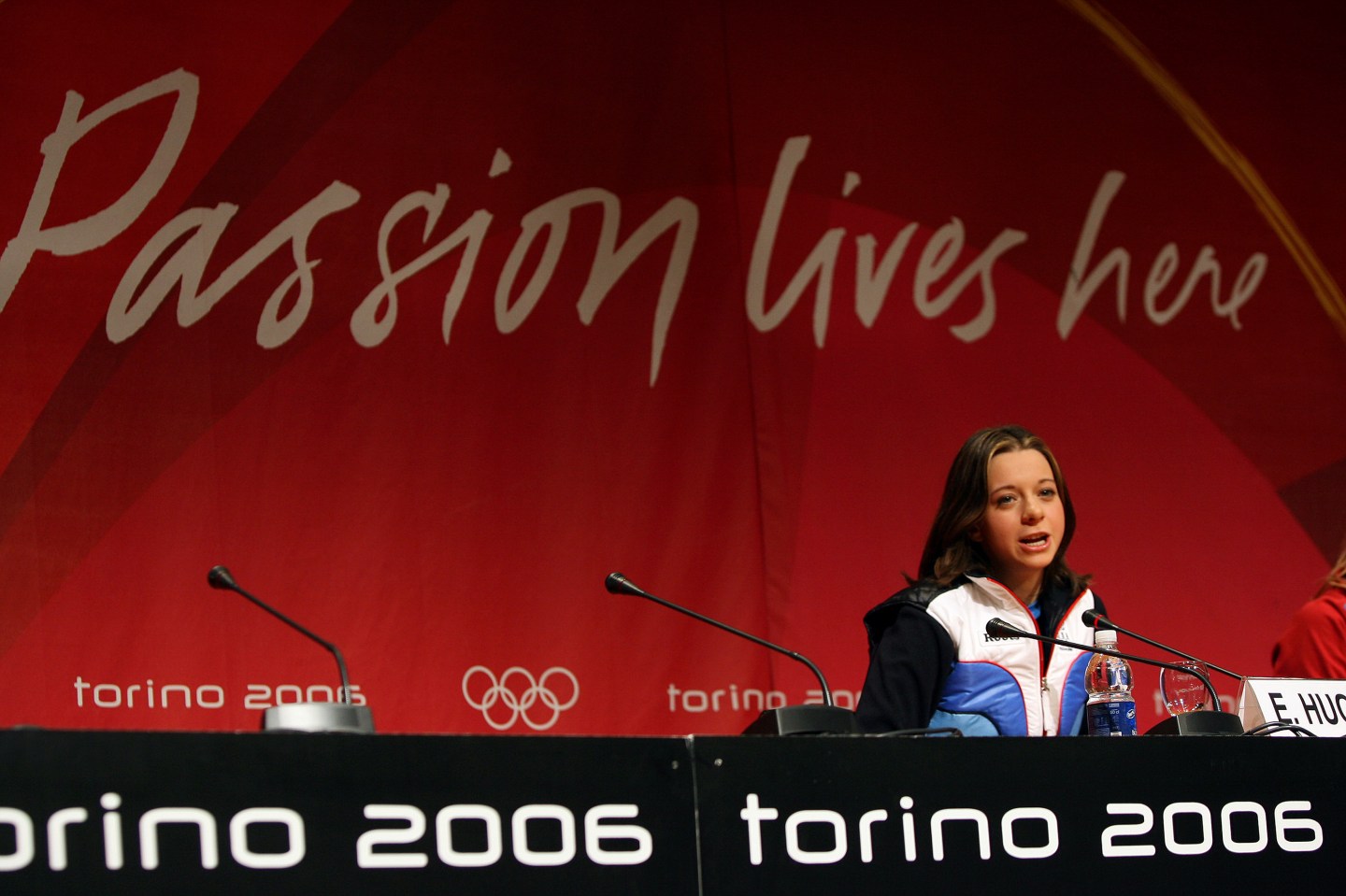 Nine years ago, Emily Hughes was at the 2006 Olympic games in Turin, Italy, skating before millions of TV viewers. Today, Hughes is in the trenches at Google (GOOG) working on Google Fiber, the company’s ambitious ultra-high-speed Internet initiative.

This 25-year-old former Olympian joined Google as a business analyst in November, and it was her love of competition – and an extraordinary tolerance for risk-taking and failure – that helped her land the job.

“I think in sports in general, there’s a lot of transferable skills that you can bring to the workplace,” says Hughes, who moved from Great Neck, N.Y., to San Francisco to begin her new gig at Google’s Mountain View offices. “In skating, every day, you fall and you have to get up. And falling is a pretty obvious failure. I’ve definitely learned from everything I’ve failed at.”

As you may recall from the 2002 Winter Olympics, Emily Hughes is the younger sister of Sarah Hughes, the world champion skater who copped the Gold in 2002.

But the road to fame was a lot harder for Emily than it was for her older sister. In 2001, at age 12, she competed in the U.S. Figure Skating Championship, but then a couple of years later, Emily failed to make the U.S. team. In 2006, she was the first alternate to the Winter Olympics, and after Michelle Kwan withdrew due to a groin injury, she was named to the team. But she finished seventh overall.

Amidst injuries and illnesses, her ambition never waned. Hughes went on to Harvard, and in her junior year, she decided to take a semester off to train for the 2010 Olympics. She failed to qualify.

“When I didn’t make the Olympic team, yes, that was a failure in a sense, but there were so many other things that I’ve accomplished because of it,” she says. For example, she had more time to join organizations such as Harvard’s “Women in Business” club and take on leadership positions on campus.

Her setbacks, she admits, also forced her to think to herself: “What is the bigger picture?”

Emily Hughes does a split jump at a charity show for breast cancer research, Skate for Hope, in 2008.Courtesy of Sarah and Emily Hughes

After Harvard, Hughes worked at Deloitte Consulting and the International Olympic Committee, but she never found her true calling. Then last year, a friend who worked at Google told her about life at the Internet giant, and Hughes was intrigued. Google Fiber delivers broadband service at 100 times what Internet users are accustomed to. The service first launched in Kansas City, Mo., in 2012 and now operates in Austin, Texas, and Provo, Utah, as well.

“Every time I talked to her, she just raved about Google’s culture and her work,” Emily says, referring to her friend. “Before that, I hadn’t really thought about working at Google. I used Google every day, but it wasn’t something that I ever thought, ‘Oh I could go work there.’”

Her friend passed on some information about Google Fiber, and she applied. Clearing a first-round interview, Hughes went through six hours of on-site back-to-back interviews, with only a lunch break– not unlike the times she used to scramble to find time for lunch in a jam-packed training day.

Certainly, Hughes possesses the most critical quality that Google seeks in its employees. “The No. 1 thing that you look for is passion,” says Jonathan Rosenberg, who wrote the best-selling How Google Works with Google chairman Eric Schmidt. “You want the kind of person who is constantly learning.” Google’s career website notes that the company looks for people who can show they’ve “flexed different muscles in different situations in order to mobilize a team.”

Flexing different muscles — well, Hughes is a pro at that. “With skating, constantly being corrected and told how to do something differently has helped me take constructive feedback better,” she says.

Hughes is simply the latest in a lineup of former Olympians working at Google. The company claims to employ at least 10. Athletes, in general, appeal to the Googlers who do the hiring because a sports background teaches you to handle criticism and adapt.

Game Theory Group CEO Vincent McCaffrey, who helps companies recruit student-athletes, doesn’t know the Hughes sisters, but he theorizes: “I would imagine Emily and Sarah have probably received a ton of feedback in their life — some of it very direct and even harsh. Employers want to hire young people who are able to take constructive criticism well.”

Global services firm EY has studied the link between sports and leadership in the C-suite. In a 2014 global survey of 400 female executives, EY found that 52% played sports at the university level. Those women, like Emily and Sarah Hughes, honed their time management skills while juggling schoolwork and training — an excellent path to consistent overachievement.

Indeed, growing up in Great Neck, Emily and her five siblings (Rebecca, David, Matthew, Sarah and the youngest girl, Taylor) were all overachievers. All six participated in figure skating or ice hockey.

Emily and Sarah credit their father for getting them into skating. John Hughes is a Toronto-born lawyer who played hockey for Cornell University and was drafted by the Toronto Maple Leafs.

Emily Hughes with her sister, Sarah, in 2012 at their hometown ice rink in Great Neck, N.Y.Photogrpah by Karen Rubin

Emily recalls her mom, Amy, lining up all six kids in age order (Emily is second-youngest) and tying their skates at the community ice rink. Emily and Sarah, who started skating when they were about three years old, are different in personality — Sarah is gregarious with a big presence, while Emily is reserved and quietly personable — but as children, they were both “competitive in our own way,” as Emily puts it.

When 12-year-old Emily stood in the stands and cheered on her big sister for a Gold medal in Salt Lake City, she knew she wanted her own shot to skate on Olympic ice. “After that, I was like, ‘I want to be an Olympian too,” she recalls, adding, “A little bit easier said than done.”

Randy Appell, her chemistry and biology teacher at Great Neck High School, recalls teenage Emily dealing with her high-stress position. “The fact that her older sister had already won the Olympic Gold must’ve put an extreme amount of pressure on her. She may have felt it, but she never let it show.”

Sarah’s Olympic stardom landed her on the cover of TIME Magazine, and when Emily was heading to Turin four years later, she was cast as America’s great hope —another Hughes champion-in-the-making.

Her seventh-place finish at the Olympics that year was disappointing, but it was not the thing that would define Emily Hughes. She had other assets — her brain and her passion to succeed — to fall back on. She remembers her dad always emphasizing that she is a “student-athlete” and that “student” always comes first. Her parents never gave her or Sarah breaks on studying, even when they were training five hours a day. And given the choice to enroll in the regular chemistry class or an honors course, Appell recalls, Emily insisted she take the advanced class.

“I always brought my books everywhere,” she says. “I was going to every competition lugging this backpack around, or you know, doing homework in the car on the way to the rink. It was always important to keep my grades up.”

As for Sarah, who is now 29, she found a new path from the Olympics too. She’s executive vice president of business development at the Kingsbridge Ice Center, a $350 million project to build the world’s largest ice skating complex in the Bronx.

Both sisters refuse to have one-dimensional careers.“I was always impressed by how tough Emily was when we were younger,” Sarah says. “She would kill herself working, working, working, but somehow, she always found some time to have fun.”

“To accomplish big meaningful things,” Sarah adds, “you need to be focused but allow enough distractions to make it a fun and worthwhile journey.”