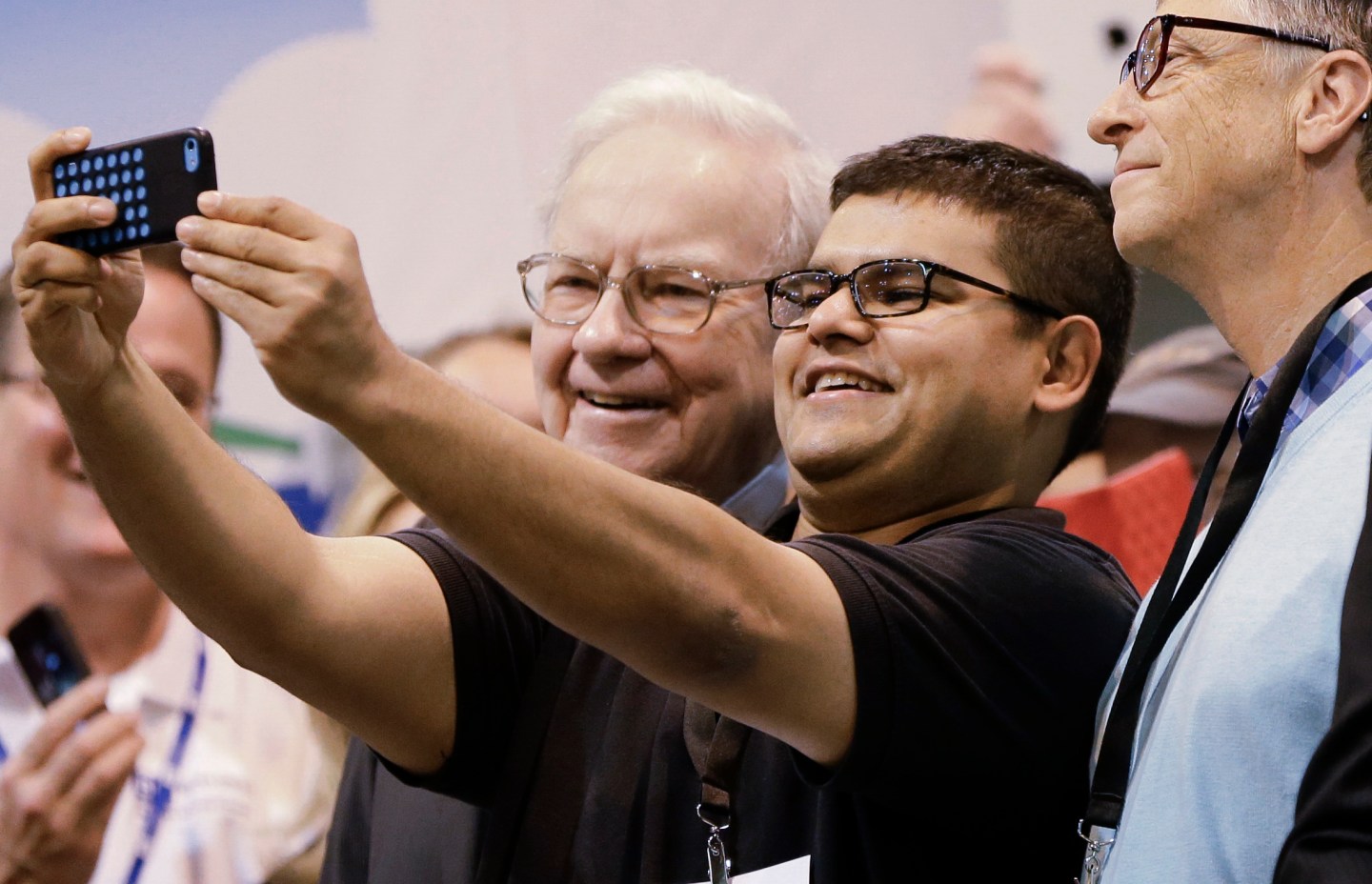 An unidentified shareholder takes a selfie with Berkshire Hathaway Chairman and CEO Warren Buffett, left, and Berkshire board member Bill Gates, right, prior to the annual shareholders meeting on Saturday, May 3, 2014, in Omaha, Neb. More than 30,000 shareholders are expected to fill the CenturyLink Arena to hear Buffett and Berkshire Vice Chairman Charlie Munger discuss their business. (AP Photo/Nati Harnik)
Photograph by Nati Harnik — AP

It’s that time of year again—not resolution-starting time, not gym-going time, but year-ahead-forecasting time. Here are 10 predictions for what’s ahead in my areas of expertise from my varying roles here at Fortune: women in leadership (as a cochair of the Fortune Most Powerful Women Summit), urbanism (as the author of The End of the Suburbs), business and markets in general (as a frequent contributor to MSNBC’s Morning Joe and host of the new Fortune Live) and… selfies.

Last year saw six new female chiefs take the reins of Fortune 500 companies. They brought the total to 26 as of the end of 2014 (which became 25 when Pat Woertz of ADM retired last year). That’s just 5 percent, yes, but the growth here is what’s significant. Twenty five is up from 20 in 2013, which is more than double the number in 2011.

In 2001, there were just three women CEOs out of 500 companies (and one of them was one-half of a husband-and-wife team, Marion Sandler of Golden West Financial).

Who will join this exclusive club this year? It’s hard to know but I’m placing my bets on at least seven new women leaders at these giant companies. (Some women may exit their posts—my prediction is not about the total number but about the number of new additions.) And I think that’s a conservative guess. The real challenge remains whether businesses will move the needle in C-suite and top-level executive positions and on corporate boards.

President Barack Obama talks with Deputy Chief of Staff for Operations Alyssa Mastromonaco and other members of his staff aboard Air Force One en route to Joint Base Andrews, Md., Sept. 9, 2012. (Official White House Photo by Pete Souza) This official White House photograph is being made available only for publication by news organizations and/or for personal use printing by the subject(s) of the photograph. The photograph may not be manipulated in any way and may not be used in commercial or political materials, advertisements, emails, products, promotions that in any way suggests approval or endorsement of the President, the First Family, or the White House.Ê

Last year, I wrote about the trend toward women being named to high-profile COO roles, listing many recent examples—Claire Hughes Johnson at Stripe, Emily White at Snapchat, Varsha Rao at Airbnb and more. I missed some, like Kathleen Phillips at Zillow and Jennifer Dulski at Change.org (who’s president, too), Molly Graham at Quip, Shari O’Loughlin at @pay, and lots of others. In recent weeks former top Obama adviser Alyssa Mastromonaco was named COO at Vice, and Judith McKenna was made COO of Walmart U.S. (replacing another woman, Gisel Ruiz). Look for more to come at companies large and small.

The reason this is easy to predict is because it is a debate with no end. There is no easy answer (there would be, if only men could bear children), no one “aha” solution wrapped up in a tidy bow. There may not even be an attainable goal in this overused expression that irks so many. (Kirsten Gillibrand voiced her frustration to Nancy Gibbs of TIME last year in one of my favorite quotes on the topic: “What are you ‘having?’” she said. “A party? Another slice of pie?”)

Instead of trying to attain the state of nirvana that the phrase conjures, corporate CEOs and policymakers should focus on identifying and attacking the specific roadblocks to equality in the workplace from all sides, on a constant basis. Some of the most critical ‘fixes’ are the least tangible, and the most difficult to change, like making it socially acceptable for dads to take time off for child-raising. Others are more practical, like adding benefits for new fathers, beefing up mentoring for women in male-dominated fields, and making workplaces more flexible for women and men. (Coming up with an expression other than “having it all” wouldn’t hurt, either.)

4. Natural food and health products will continue to boom.

Interest in plant-based foods, organic everything, paraben-free household products, meditation, mindfulness and overall “wellness” will continue to surge in 2015, much to the benefit of companies like Hain, Beyond Meat, Hampton Creek, and biggies like P&G and Pepsico if they can be nimble enough to innovate and stay with the trends (P&G now has a page on its website, “What are Parabens?” and offers some paraben-free products). Look for this to be the year of the Big Food acquisitions of many of these brands, the way General Mills bought Annie’s Homegrown, Kellogg now owns Bear Naked granola and Kashi, and Pepsico owns Naked Juice (what is it with natural foods and nudity?)

Every week seems to bring some new high-profile headline about how our cities are thriving and the suburbs are dying (shameless author plug: I wrote a book about this). In 2015, we’re going to see a new focus on a little-discussed player in this narrative: small cities. Big cities like New York and San Francisco get all the attention, but they’ve also drawn all the wealth, becoming prohibitively expensive for the middle class.The previous path for this group—the suburbs—has lots its appeal.

Enter the small city, which offers a much lower cost of living and all the cultural and lifestyle benefits of living in a big city. Portland and Austin are the poster children for liveable small cities, but you can now find third wave coffee shops and loft-style condo development in places like Cincinnati, Kansas City, Chattanooga, Greenville, Omaha, Buffalo, Sioux Falls and in almost every place that calls itself a city. As one source said to me recently, “moving to a smaller city is the new moving to the suburbs.”

6. We'll see the rise of the email workaround.

I’ve said this before, and those who know me know I’m passionate about it, but email has gotten out of control. The inflow is one thing, but it’s the outbox that’s a killer; on one particularly desperate-to-catch-up day late last year, I sent 91 emails. My brain was fried afterwards, and needless to say, I didn’t get any real, concentrated, focused work done.

Everyone knows this (and in the post-Sony era, add the very real wake-up call that none of our emails are safe). Now, a growing number of group messaging platforms, filters and other workarounds are gaining ground, things like Hipchat, Slack, Teller, Roundup, Trello, and Vade Retro—which bills itself as an eliminator of nonessential “graymail.” Help is on the way, people.

Look for women in politics to claim a disproportionate share of the conversation in 2015. Hillary Clinton and Elizabeth Warren are already dominating chatter for 2016, but Carly Fiorina seems to be getting serious about throwing her hat in the race too.

On the global front, Angela Merkel faces challenges both inside Germany and on the worldwide stage as she wrestles with a Eurozone crisis, anti-immigration protests and facing down Vladimir Putin. Much more locally, Gina Raimondo, the newly-elected governor of Rhode Island, is already making waves for her uniquely pragmatic approach to the business class in addressing issues of income inequality.

8. The tech bubble will continue.

Yes, valuations are crazy. Yes, there are too many “unicorns,” privately-held startups with valuations of $1 billion or more. But there is also a lot of money out there and still a lot of hype around what these companies promise. Valuations will continue to climb in 2015 (and Uber and Airbnb, while I’m at it, will grow bigger and richer despite their legal and, in the case of Uber, PR challenges). If there’s a slowdown in tech, it won’t come until next year. The upside of this: look for more women-owned unicorns, a “group” that right now includes just one—Elizabeth Holmes’ Theranos.

Mark Zuckerberg’s resolution to read a book every other week in 2015 has way more commercial impact than his previous goals (learn Mandarin, only eat meat he kills, write one thank you note a day). This plan, which includes posting his choices and fostering discussion on the new Facebook page, “A Year of Books,” has the potential to eclipse the sales might of Oprah Winfrey’s Oprah’s Book Club.

In its first three years, the 22 books Winfrey picked are said to have sold an average of 1.4 million copies each. Within three days, Zuckerberg’s first pick, Moisés Naím’s The End of Power, was out of stock on Amazon. Oprah drew 6-8 million viewers each week. Zuckerberg has some 30 million followers on Facebook. That’s math any author will “like.”

A shareholder takes a selfie with Berkshire Hathaway Chairman and CEO Warren Buffett, left, and Berkshire board member Bill Gates, prior to the annual shareholders meeting on May 3, 2014, in Omaha, Nebraska.

I stole this one from my colleague Jennifer Reingold. I think she’s onto something. Here’s hoping.