The iPhone, the carriers and the credit mules – update 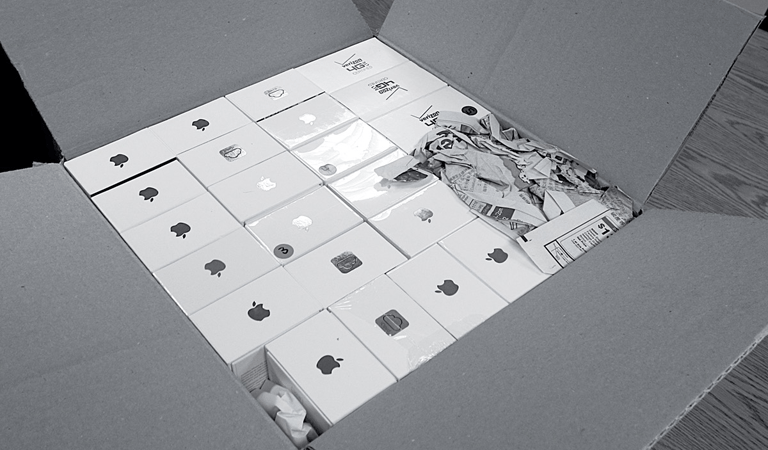 Contraband smartphones confiscated by the California Department of Justice’s eCrime Unit. COURTESY OF THE CALIFORNIA DEPARTMENT OF JUSTICE

Matthew Shaer’s piece in the current issue of Wired about the Secret World of Stolen Smartphones covers all kinds of theft — from subway “Apple picking” to warehouse smash-and-grabs.

But he leads with a provocative anecdote that I wish he had come back to.

The story starts with a FedEx package that broke open in Rancho Cordova, Calif., revealing 37 shrink-wrapped iPhones. Police took the serial numbers, taped the package back up, and waited to see where it went.

It led them, according to Shaer, to a middleman named Wasif Shamshad, a pair of Chinese-Americans — Shou Lin Wen, and his wife, Yuting Tan — and a larger shipment of 190 iPhones addressed to an apartment in Hong Kong.

A picture,” Shaer writes, “slowly emerged of a so-called credit-mule scheme, ingenious in its simplicity and impressive in its reach. Middlemen such as Shamshad were dispatched to seemingly random American cities, where they trolled homeless shelters and halfway houses, offering $100 to anyone who would buy, on their behalf, a few on-contract phones from a local electronics store.

“Back in California, the contraband was handed off to Wen and Tan, who arranged to have the phones shipped to their contacts in Asia. The profit margin was enormous: In North America, wireless carriers typically subsidize the cost of our smartphones in order to lure us into multiyear voice and data contracts. To obtain a phone, in other words, we fork over a small fraction of the device’s actual market worth. Wen and Tan took advantage of the system by obtaining iPhones—through middlemen and mules—for $200 a pop, then selling them in China for close to $1,000.”

Help me out here. The only way I can see a $200 iPhone getting sold for $1,000 in China is if someone paid the subsidized price and skipped out on a contractual obligation — either to pay it off over time or to stick with the carrier for the duration of the contract.

Either way, the carriers — who pay Apple full price, or nearly so — would be stuck holding the bag. According to Shaer, the investigators who confiscated those 190 iPhones spent hours on the phone sorting things out with representatives from Sprint, AT&T and Verizon Wireless.

I’d always assumed that the long lines of Asians camped outside New York’s Apple stores were involved in some kind of arbitrage, making a bit of spending money on the difference between the U.S. price of an iPhone and what rich buyers in China are willing to pay. That’s a legitimate business.

What Shaer describes is fraud.

I have no way of knowing what was going on in Casey Neistat’s viral video — viewed more than 3 million times since we featured it in September. (See Where China’s grey market hits the sidewalks of New York.)

I have to assume that everyone who waited so patiently in line was there on legitimate business. But re-watching the video after reading Shaer’s story, it’s hard not to have second thoughts.

Apple declined to comment, except to say that before customers can walk out of any Apple store with a subsidized iPhone they must provide their name, social security number (last four digits) and two forms of ID. The information is sent, via hand-held EasyPay terminal, to the carriers. Only if a customer is deemed credit-worthy by the carrier’s computer does the sale go through. AT&T, which uses a similar credit-checking procedure in its stores, declined to comment.

[UPDATE: Sprint was more forthcoming. “Once we introduced the iPhone we were seeing just rampant credit muling,” a spokesman told 9News-TV’s Jeremy Jojola last April. “There are many laws being broken by this kind of activity, so Sprint has actually filed about 40 lawsuits — Federal lawsuits — all over the country.”

Jojola caught a couple guys running a credit mule operation at the Apple Store in Denver’s Cherry Creek Shopping Center and filed a pretty thorough report — including an interview with a homeless guy who was surprised his bad credit was good enough to get contracts. Link: Caught on camera: 9Wants to Know exposes ‘iScheme’]