Jesse Jackson, Tim Cook and the ‘storming’ of Apple HQ 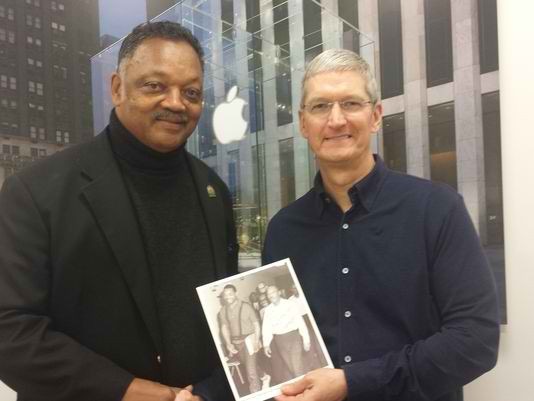 The attached photo of Jesse Jackson with Tim Cook and a black-and-white of their mutual hero Martin Luther King was shot Monday at Apple headquarters in front of a poster of Apple’s big glass cube in New York City.

I couldn’t find any photos of the 100-plus demonstrators Jackson led in protest chants outside Cook’s office three days later — in the middle of a hurricane-force tempest that dumped half a foot of rain on Silicon Valley and knocked out power to more than 100,000 Bay Area computers.

(“Protestors storm Apple Campus” was the headline in the San Jose Mercury News. Get it? Storm.)

I’m pretty sure Monday’s meeting was not the shakedown described in Theodore Lee’s satirical Fly on the Wall, although that seems to be the prevailing theory in the AppleInsider comment stream.

I prefer to think of it as a pre-demonstration courtesy call — a polite meeting of two professionals with well-rehearsed set speeches.

According to Jackson, every high-paying Apple job creates four low-paying service jobs. Other studies suggest the multiplier may be even higher.