Is the video of Steve Jobs’ deposition worth fighting for? 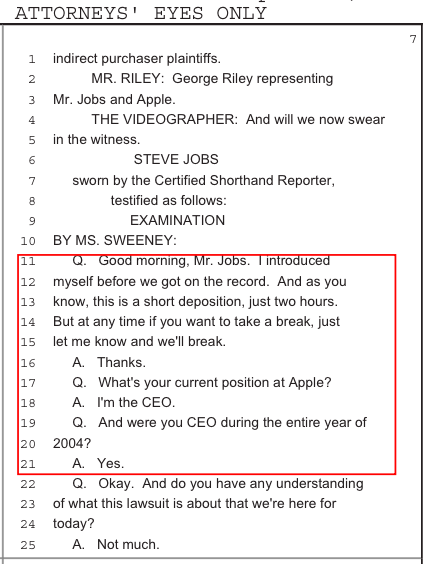 CNN, Bloomberg and the Associated Press are trying to get their hands on a 27-minute videotape of Steve Jobs being deposed for the iTunes trial now underway in Oakland. Shot six months before he died and shown to a jury last week, it would be — if released — one of his last public appearances.

“Given the substantial public interest in the rare posthumous appearance of Steve Jobs in this trial, there simply is no interest that justifies restricting the public’s access to his video deposition,” attorney Thomas Burke, representing the three media organizations, wrote in a filing Monday.

“The marginal value of seeing him again, in his black turtleneck — this time very sick — is small,” Apple lawyer Jonathan Sherman replied. “What they want is a dead man, and they want to show him to the rest of the world.”

U.S. District Court Judge Yvonne Gonzalez Rogers indicated that she was inclined to rule against release, but she gave both sides until the end of the week to sharpen their arguments.

Is the video worth fighting for? You be the judge. Here’s the transcript.