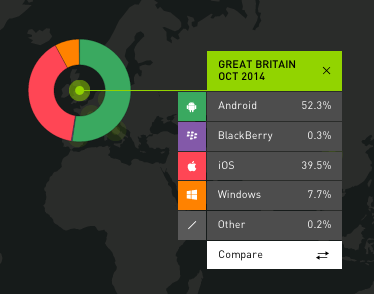 “Apple has experienced a huge jump in sales share across almost all major markets thanks to the launch of the iPhone 6,” writes Dominic Sunnebo in a report issued Wednesday by Kantar Worldpanel ComTech, the research arm of advertising-and-PR giant WPP.

Below, the usual country-by-country Kantar grid plus a new interactive “dataviz” showing how market shares have changed between January 2012 and October 2014.