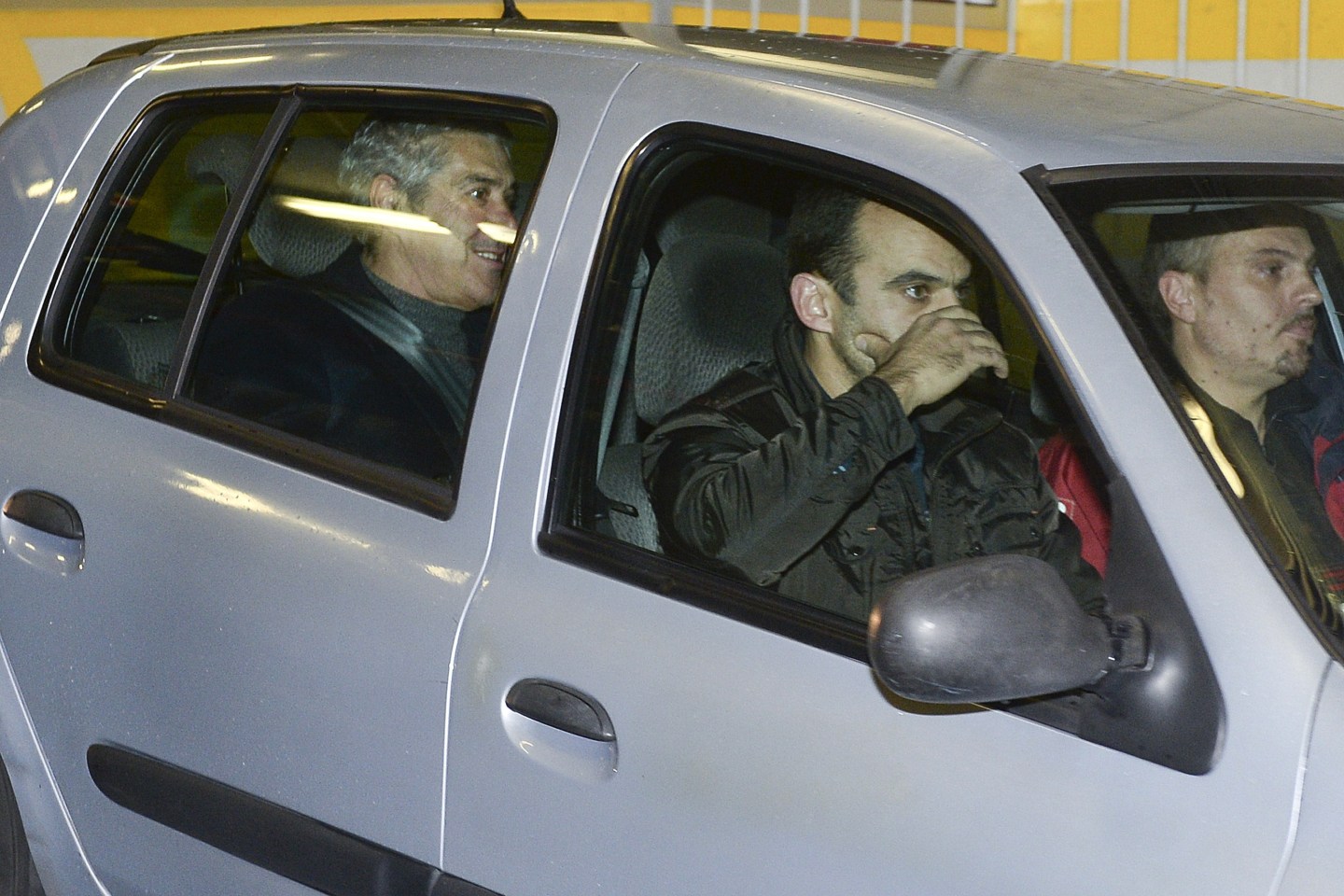 Former Portuguese Prime Minister Jose Socrates leaves the court in a police car, in Lisbon on November 23, 2014. Portugal's former Socialist prime minister Jose Socrates will return before a magistrate on November 24, and will spend a third night in custody following his shock arrest as part of an inquiry into tax fraud, corruption and money laundering. Socrates, 57, who has been held since his arrest on November 21 as he arrived at Lisbon airport on a flight from Paris, made a first appearance in court on November 22 to answer questions about suspicious money transfers and banking operations. AFP PHOTO / PATRICIA DE MELO MOREIRA (Photo credit should read PATRICIA DE MELO MOREIRA/AFP/Getty Images)
Photograph by Patricia de Melo Moreira — AFP/Getty Images

The man who led Portugal as it took a 78 billion euro bailout from the Eurozone and International Monetary Fund will face his third day of questioning Monday in connection with a police investigation into corruption.

Jose Socrates, a Socialist who was prime minister from 2005 to 2011, was arrested late Friday and detained all through the weekend as part of an inquiry into suspected tax fraud, corruption and money-laundering, Reuters reported Socrates’ lawyer Joao Araujo as saying.

Araujo declined to say whether Socrates had been charged with any crime or admitted to any wrongdoing. The maximum penalty for corruption in Portugal is eight years in prison.

It’s the first time since Portugal emerged from fascist dictatorship in the 1970s that a former premier has been detained. Socrates’ arrest follows the arrests of other high-ranking officials or prominent people in separate inquiries in the past few months as prosecutors intensify a fight against corruption in a country notorious for its slow justice system.

It was not clear if the inquiry, known as “Operation Marquis”, was linked to Socrates’ time as premier in 2005-2011.

During his premiership, Socrates weathered several investigations, including allegations that he misused his post as environment minister in 2002 to allow the construction of a shopping mall. He denied wrongdoing and faced no formal charges.

Prosecutors are investigating several prominent people in separate corruption and fraud cases, including the head of the country’s immigration service, who was arrested last week on suspicions of corruption linked to the issuing of so-called “golden visas” to wealthy foreign investors.

Socrates resigned as prime minister in the middle of his second four-year term after requesting the bailout, which forced widespread and deeply unpopular cuts in public spending and increases in taxation.

The country exited the bailout program in May, but was accused by the IMF two weeks ago of backsliding on necessary reforms.

The IMF said next year’s budget deficit is likely to be far higher than the government admits, at 3.4% of gross domestic product, and is “not in line with the commitments in the present medium-term fiscal framework.” It also warned that a huge corporate debt hangover was threatening to derail the economic recovery.

That legacy of excess corporate debt was evident earlier this year in the collapse of Portugal’s, Banco Espirito Santo SA, whose loan losses in the recession finally caught up with it in the summer after years of evasive accounting.