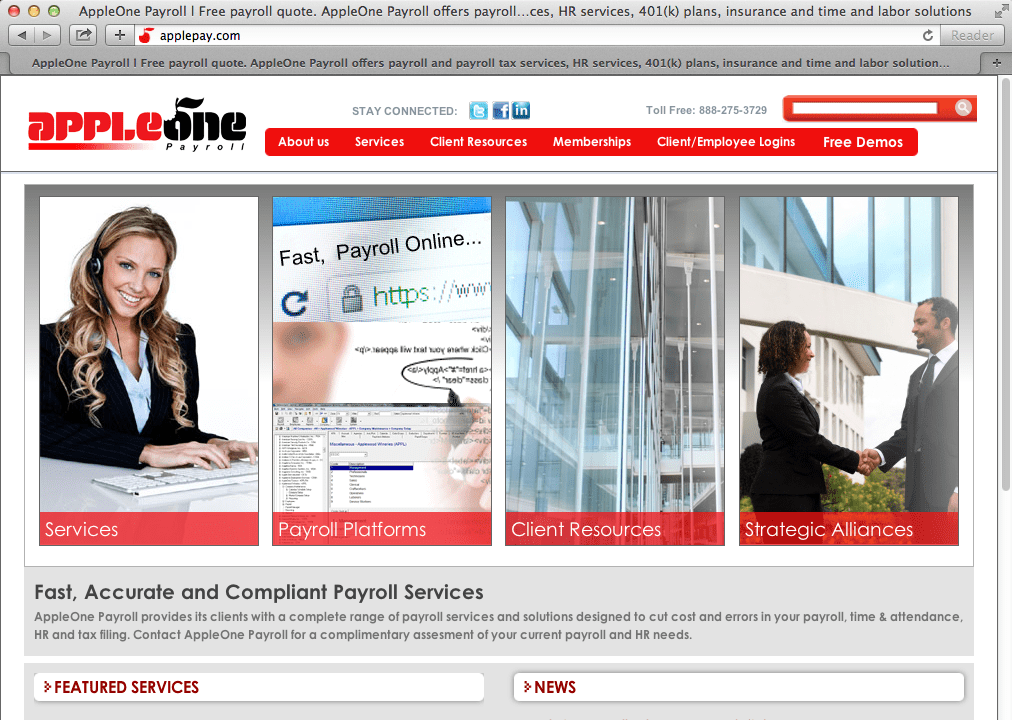 It may come as a surprise, but type in the web address you would expect for Apple’s splashy new mobile payment product, Apple Pay, and you’ll find a very un-Apple web site indeed.

Applepay.com is the web site of AppleOne Payroll, a payroll services and compliance company based in Torrance, Calif., that has used the URL since May 2002. From a design standpoint, its site is a far cry from Apple’s corporate site, but it is very much a real company, with an 800 number and a human operator.

The address, while different from the company’s name, was chosen “as a short and easy way to remember all of the services that we offer,” an AppleOne Payroll spokesperson tells Fortune.

Here’s what’s interesting: The payroll company says the tech giant (AAPL) has never reached out to try and obtain the domain. “We have not been approached by Apple nor have we actively sought to sell the domain,” Apple One Payroll says. Apple declined to comment for this story.

Curiously, in February 2012, AppleOne tweeted about its “new website,” saying, “Check it out!” The new URL: Appleonepayroll.com. Where does it go? To the same homepage as applepay.com, of course.

Apple has a long history of introducing and selling products without owning the accompanying URL. The web site ipad.com currently goes to a blurry cityscape with the text, “coming soon.” Macbook.com brings you to an even more bare-bones page that reads, “The MacBookClub.” (It’s owned by CORVAD Inc.) And ibooks.com is parked by GoDaddy, the popular web hosting company. These are somewhat surprising: ipod.com, itunes.com, iphone.com, and icloud.com all do redirect to Apple’s corporate site.

Apple watchdogs might say that the lack of domain ownership is no surprise—that this is just another example of the company that Steve Jobs built showing some of that healthy Jobsian ego.

Is the fact that a small payroll company owns the relevant domain really going to impact Apple’s business in any meaningful way? Unlikely. But it’s a fun fact all the same.

Next, read: “eBay started as a website about Ebola” by Erin Griffith