Trains and self-driving cars, headed for a (political) collision 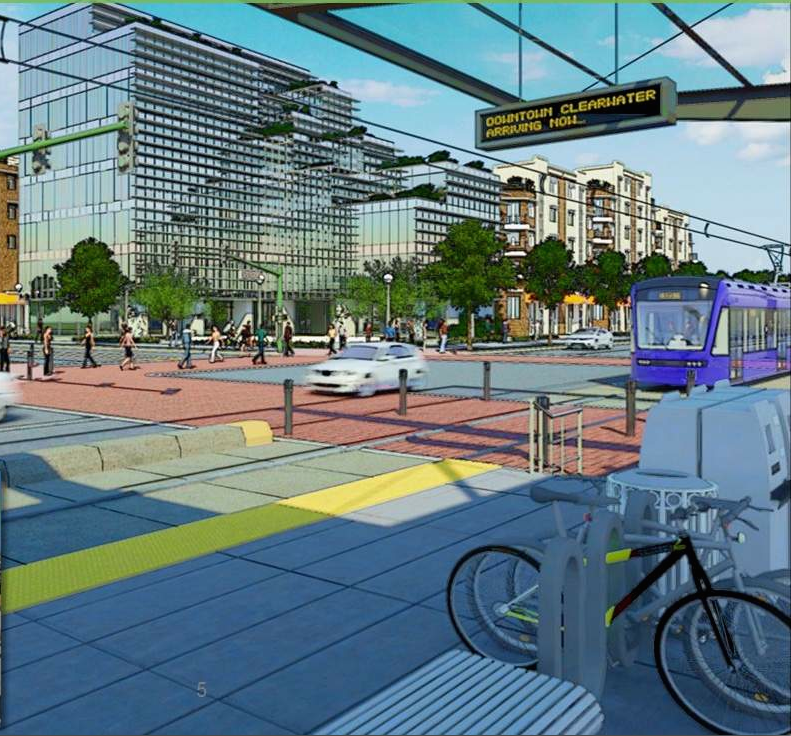 “It’s like they’re designing the pony express in the world of the telegraph.”

Florida state senator Jeff Brandes, a Republican representing District 22, uses that line frequently to characterize Greenlight Pinellas, a comprehensive transit plan for Florida’s Pinellas County. Up for a public referendum on Election Day this Tuesday, Greenlight will fund increased bus service and a new light rail system. Supporters say it represents a tried, true, and long overdue solution to the area’s perennial transit woes. Pinellas, the city of St. Petersburg, and the broader Tampa Bay region are consistently near the bottom in a number of transportation and livability indexes. They suffer high average commute times, astronomical pedestrian fatality rates, and massive per-capita spending on the private automobiles that, given today’s inadequate public transit system, even the very poorest need to get by.

But Brandes argues that the entire idea of bus- or train-based public transit is on the verge of obsolescence. Instead, he sees a future in which autonomous vehicles—also known as automated vehicles, or AVs for short, and best embodied by Google’s self-driving cars—solve the region’s transit problems. “I absolutely believe that technology is going to transform mass transit in a way that very few people can see,” he says. “It’ll definitely be within 15 or 20 years, which is right when the light rail system for Greenlight Pinellas would be coming online.”

Most analysts agree with Brandes’ timetable, if not necessarily his position. Sven Beiker, executive director of the Center for Automotive Research at Stanford (or, naturally, CARS), says that within this decade we’ll see intra-urban autonomous vehicle networks—systems that will deliver small personal mobility “pods” within dense core areas. Such a system is already set to deploy in Milton Keynes, Buckinghamshire, England by 2017. Such systems, both Sen. Brandes and AV specialists say, will reduce congestion, lower parking demand, increase rider safety by reducing wait times, and, in the case of public systems, provide universal access.

But the unknowns become more pronounced when discussion moves from small-scale intra-urban systems to the kind of long-distance people-moving accomplished by inter-urban light rail and bussing. Beiker says the challenges of fully autonomous highway driving push the possible technological horizon for autonomous transport past 15 years. An even bigger hurdle may be social. Do you really want to share a 45-minute commute in a car-sized pod with three strangers?

Broadly, public transit development is trending up, thanks in part to higher demand among millennials and technology enthusiasts. Tampa Bay exemplifies the many southern and western U.S. cities where projects are playing catch-up after decades as political nonstarters. Transit planners, officials, and voters in cities like Austin and Charlotte will certainly find themselves wrestling with the unknowns of autonomous vehicle development as they try to decide whether to expand systems now or wait for what’s next.

Political ideology, as it tends to, may rush into the vacuum of facts. Florida offers a preview where driverless cars have become part of right-wing pushback to mass transit plans. It was Brandes who introduced legislation that made Florida one of only four states to allow monitored testing of driverless vehicles on public roads. Republican governor Rick Scott, who once was strongly associated with the populist Tea Party movement, has made public appearances to support driverless car development in Florida even as he has rejected federal funding for a Tampa-to-Orlando high-speed rail line.

Put them side by side with rail systems and the appeal of autonomous vehicles to conservatives is clear. Though many predict networks of AVs will be publicly financed, they can also be privately owned, and by most projections will require far less government-funded infrastructure than rail. Unlike trains or busses, they’ll take you wherever you want to go, when you want to go there, alone if you wish. Driverless cars will, in many of the ways so central to American identity, still be cars. But they’ll also make getting from one place to another easier for everyone, reducing strain on existing road systems and increasing access. As Sven Beiker puts it, “Vehicle automation is the point where personal mobility and public transportation come together,” a physical manifestation of Silicon Valley’s ideological mix of the utopian and libertarian.

By contrast, while they don’t oppose autonomous vehicles per se, mass transit boosters in Pinellas County are less sanguine. “We don’t see autonomous vehicles solving the public transportation dilemma,” says Chris Steinocher, President and chief executive of the St. Petersburg Chamber of Commerce, which has endorsed the Greenlight Pinellas plan. “One solution isn’t going to fit all.” Steinocher predicts that AVs will be part of a “multi-modal” transit system, providing first mile/last mile connections to conventional bus and rail lines, or coverage in low-volume use cases, such as late-night service. Beiker agrees that this is the most practical future scenario.

Others in the fight see the autonomous vehicles argument as little more than a political stalling tactic, deployed by those who oppose mass transit for ideological reasons. “We are the last metropolitan area in the United States to develop a regional transit system,” says Phil Compton, a national Sierra Club staffer who has been tasked with supporting Greenlight for the past three years. “That is an objective fact. How many more decades do we have to wait for an alternative to what we have now?”

The fate of Pinellas County’s transit system is uncertain. Polls over the past two years have shown broad public support for the Grefenlight project, and a coalition of officials on the right and left is behind the plan. But Brandes and other opponents are gaining ground, with some carefully worded private polls placing the outcome of Tuesday’s vote in question. Brandes suggests that a less capital-intensive rapid bus transit system is the more sensible path forward into a rapidly changing transportation landscape.

The possibility of autonomous vehicles has played a far smaller role in Pinellas County’s transit debate than the one-cent sales tax hike that would fund the system. But if its innovation does help sway the vote, Google (GOOG) wouldn’t be the first large corporation to impact the transit equation in Pinellas. The City of St. Petersburg was home to one of the country’s many successful electric intra-urban tram systems from 1919 to 1949, when a coalition of interests backed by General Motors (GM) and Firestone bought and dismantled most of the system. It was replaced with less appealing and efficient busses, accelerating the adoption of private cars and pushing the entire region into the predicament it’s still trying to fix today.