The 10 highest sales-generating malls in the U.S. 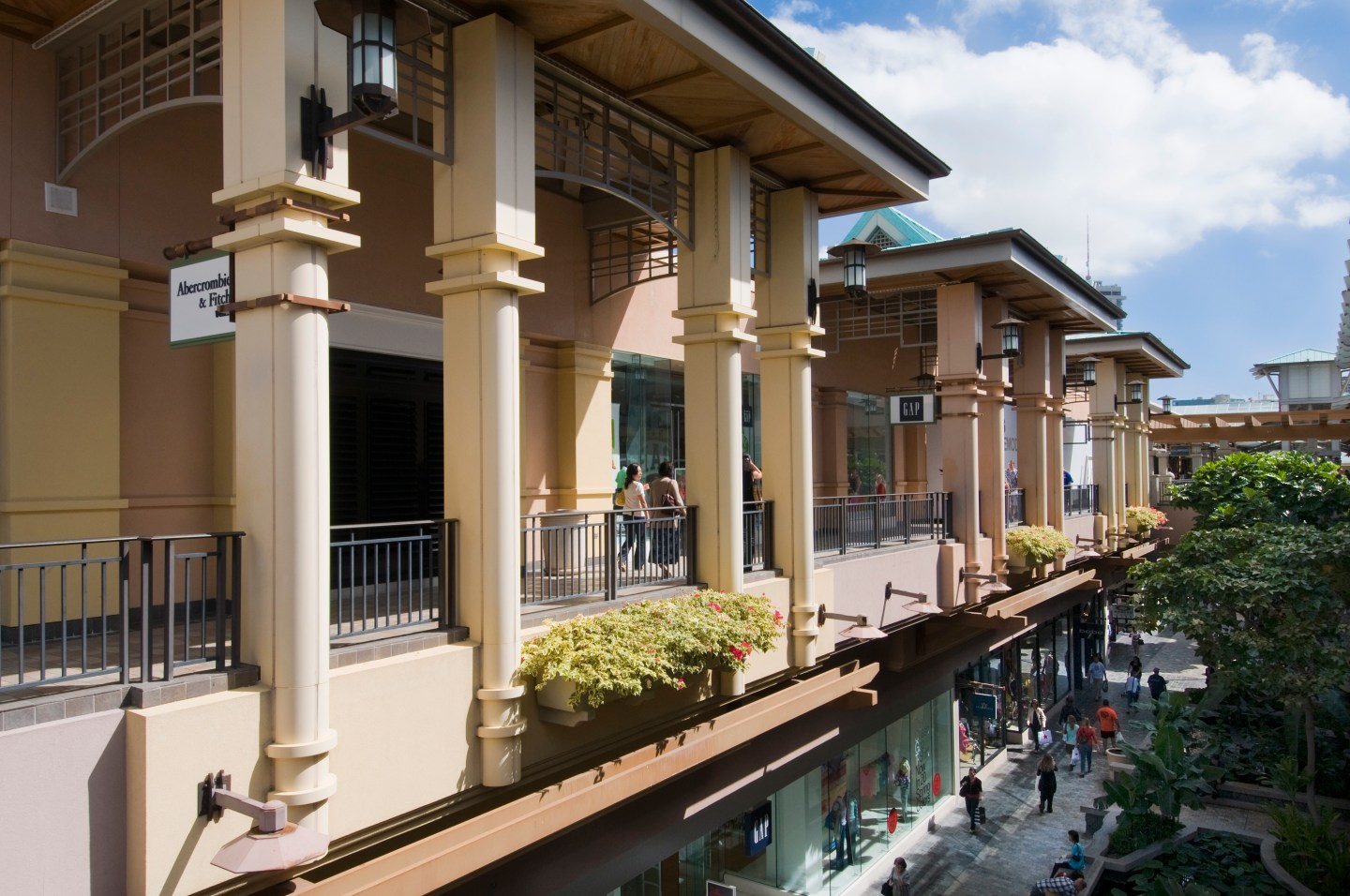 It’s become a bit of a cliché to say that the U.S. mall is dead.

To be sure, many retailers complain about declining shopper traffic, and stores from mall stalwarts Sears (SHLD) and J.C. Penney (JCP) to Coach (COH) and Gap (GPS) have closed many stores in recent years. Analysts say too many malls have become stale and obsolete—in fact by some estimates, 15% of malls are expected to close by 2024 after years of overbuilding.

But at the same time, many malls have reinvented themselves through remodels, adding high quality restaurants and attracting hot new retailers. Two of the biggest mall developers in the United States have reported stellar quarterly results, showing how much life is left in the mall concept, if done well: Simon Property Group (SPG) reported last week reported its tenants’ sales rose 2.8% last quarter, while General Growth Properties (GGP) on Tuesday said that 97% of its portfolio was leased.

The biggest growth areas in retail in recent years have been luxury, as well as outlet malls, where shoppers can get big-name brands at big discounts, trends that are abundantly clear from the list of the 10 U.S. malls by sales per square foot (the most closely watched metric in retail), according to 2014 data provided to Fortune by real estate analysis firm Green Street Advisors.

Sales per square foot: $3,010 (Owner: family-owned)
The luxury mall just north of Miami Beach, and anchored by Neiman Marcus and Saks Fifth Avenue, is nearly 50 years old, but it has continued to update itself by adding the fastest growing names in luxury and offering high end dining: it recently opened a Vince (VNCE) store, and will open a 6,400 square-foot Hillstone restaurant. The Vilebrequin store is the largest in the world for that swimwear brand, while chains like Tiffany & Co (TIF), Gap Inc's (GPS) Intermix as well as Giorgio Armani boast the newest store designs.

Sales per square foot: $2,100 (Owner: Caruso Affliliated)
This 12-year-old mall is fully leased and in many ways shows how a development can be current, even cutting edge, by tapping the history around it: The Grove's layout was designed around the iconic Grove Trolley. And its 14-screen movie theater, a top venue on a per-screen revenue basis, is an art deco-influenced building, and staffed by ushers wearing classic pillbox hats harkening to nearby Hollywood's heyday. The 600,000 square-foot mall's stores vary from the very high-end Barneys New York to Gap (GPS), as well as a flagship for hot British fashion brand Topshop Topman.

Sales per square foot: $1,855 (Owner: General Growth Properties)
This upscale mall in downtown Portland shows how a good location is always in demand- when Saks Fifth Avenue closed its store in 2010, Pioneer Place was able to quickly replace some of the space with an H&M location, and then later an Apple (AAPL) store. The mall's tenants include fast growing brands like Tory Burch and Tumi (TUMI).

Sales per square foot: $1,550 (Owner: Simon Property Group)
The granddaddy of the outlet mall concept, grossing about $1.3 billion a year, Woodbury is a mandatory stop for countless tourists visiting New York City, as it's 60 miles away from the Big Apple. On top of the usual staples of outlet malls like Saks Fifth Avenue, Coach (COH) and Neiman Marcus Last Call, Woodbury Common is host to stores for brands that don't really do the outlet thing, like Tom Ford and Prada. The outlet center, visited by some 13 million visitors a year, is in the middle of a $170 million renovation that's expected to be finished in 2016. It will expand the mall by 60,000 square feet for a total of 900,000 square feet.

Sales per square foot: $1,515 (Owner: Simon Property Group)
Befitting any shopping emporium in the capital of excess, Las Vegas, The Forum Shops at Caesars is over the top: it has talking statues at its Atlantis fountain show, a 50,000-gallon aquarium for exotic fish, and one of only two spiral escalators in the U.S. Part of its secret sauce is to blend true luxury, with shops for brands like Salvatore Ferragamo, Versace, Dolce & Gabbana and Louis Vuitton, along with middle-of-the-road brands like Gap (GPS), Nike (NKE) and fast fashion chain H&M.

Sales per square foot: $1,500 (Owner: Turnberry Associates)
Aventura is Florida’s largest shopping mall, and the second largest in the U.S. after Mall of America in Minneapolis in terms of number of visitors with 28 million, according to a Miami Today report. And it could get to get even larger with its third expansion: the owners of Aventura Mall, located North of Miami, said in February the mall would add a new 241,000-square-foot retail wing and a seven-level parking garage. They have also been adding more luxury shops, which run the gamut from Louis Vuitton and Cartier, to Burberry, and Breitling. As of last September, the mall was 99.5% occupied with a mix of luxury and mass-market tenants like J.C. Penney, according to Moody’s Investors Service.

7. The Mall at Millenia (Orlando)

The Mall at Millenia, Orlando, Florida

Sales per square foot: $1,400 (Owner: The Forbes Company in partnership with Taubman Centers)
This 1.2 million square foot luxury mall, opened in 2002, has emphasized dramatic architecture to distinguish itself, including a palm tree promenade at the valet entrance and vaulted end-to-end skylights eight stories high. It boasts twelve 10-foot tall LED screens atop 35-foot masts circling the terrazzo-tiled grand court that present the latest in fashion.

As is de rigueur for malls today to succeed, The Mall at Millenia boasts high end restaurants along with big name anchor tenants like Neiman Marcus, Bloomingdale’s and Macy’s (M), as well as with 150 stores such as Chanel, David Yurman, and Michael Kors. (KORS).

Sales per square foot: $1,385 (Owner: Simon Property Group)
This outlet mall owes a lot of its success to being only 2 miles from Walt Disney World and other attractions that draw 48 million people a year. Orlando Premium Malls opened in 2000 and has already been expanded twice, most recently last year. Its growth is reflective of how much the outlet business has grown: according to the International Council of Shopping Centers, there are now 340 outlet centers in the US, up from 311 in 2007, with many more on the way. The 160+ stores at Orlando Premium Outlets  ran the gamut from Ann Taylor to Barneys New York to VF Corp's (VFC) The North Face, to Italian luxury footwear purveyor Tod’s.

Sales per square foot: $1,360 (Owner: General Growth)
The Ala Moana is the world's largest open air mall and one of the largest overall in the U.S. Founded in 1959, it is undergoing a big $573 million redevelopment its owner, General Growth, expects to be done in about a year's time. The redevelopment, which will add 340,000 square-feet to the mall, is centered around a closed Sears store. Bloomingdale's is opening its first Hawaii store as part of the project.

Sales per square foot: $1,245 (Owner: Taubman Centers (TCO))
This luxury mall in the affluent New York City suburbs is one of only two malls in the country with five anchor department stores: Bloomingdale’s, Macy’s, Neiman Marcus, Nordstrom and Saks Fifth Avenue. What's more, some 40 of the 150 stores have their only New Jersey location at the store, including Chanel and Van Cleef & Arpels.