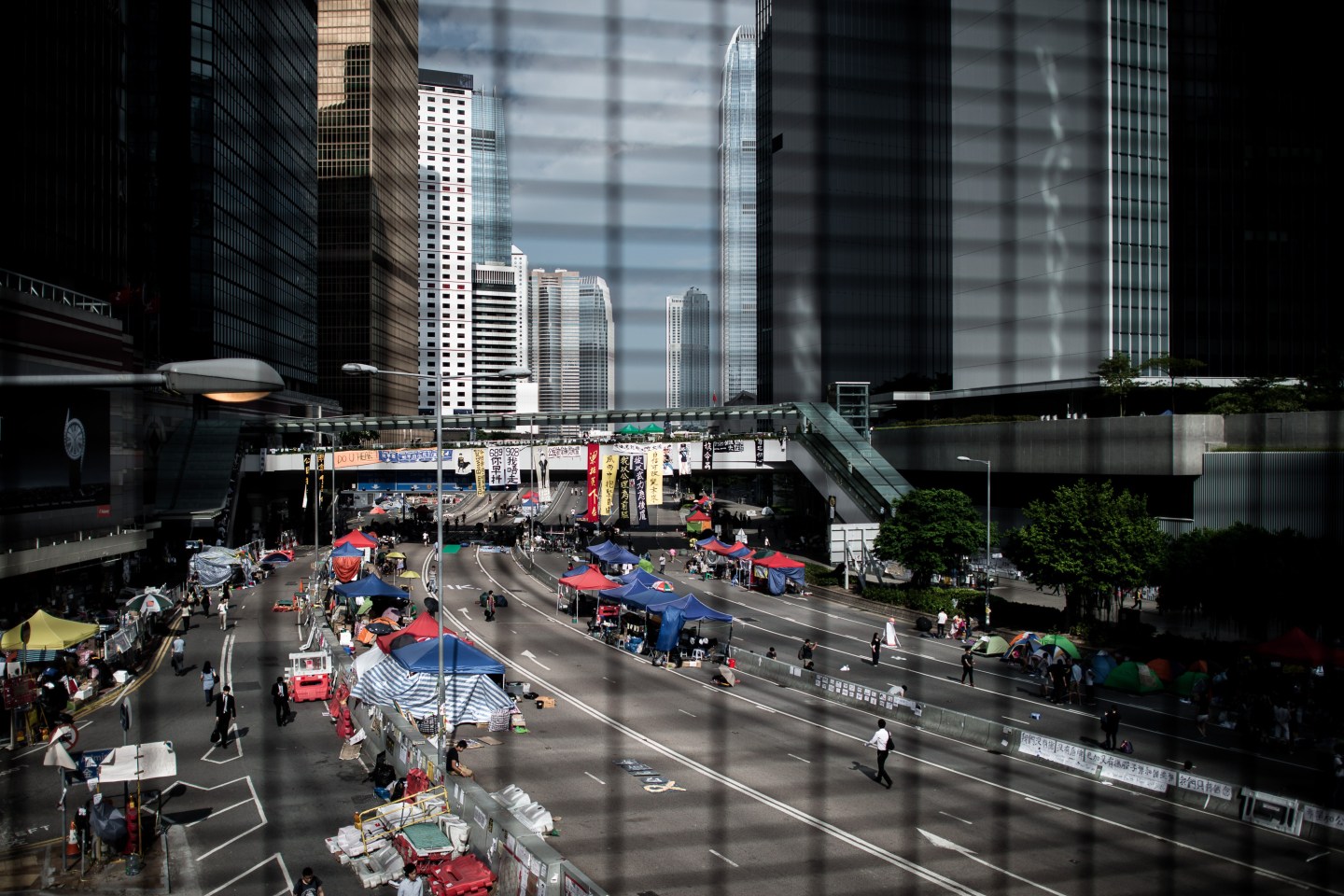 The main gathering site of pro-democracy demonstrators located on a highway is seen from a pedestrian bridge in Hong Kong on October 10, 2014. Hong Kong protesters are planning a fresh show of force after talks with the government dramatically collapsed and US lawmakers urged President Barack Obama to press concerns about the city's democracy fight with Beijing. AFP PHOTO / Philippe Lopez (Photo credit should read PHILIPPE LOPEZ/AFP/Getty Images)
Photograph by Philippe Lopez — AFP/Getty Images

Pro-democracy protests were set to swell again over the weekend after the city’s government abruptly cancelled talks with protest leaders over how to resolve a week-long stand-off that has badly disrupted both government and business.

Hong Kong’s chief secretary Carrie Lam walked away from talks with student leaders of the protest movement in response to their demands that corruption allegations against CY Leung, the city government’s chief executive, be investigated.

Leung, who has the support of the central government in Beijing and who wants to push through Beijing’s plans to pre-screen all candidates in Hong Kong’s future elections, has been accused of taking an unauthorized $6.4 million payout while in office.

Australia’s Fairfax Media reported this week that engineering firm UGL Ltd paid Leung a total of $6.4 million in 2012 and 2013 in relation to its acquisition of DTZ Holdings, a property consultant that employed Leung as its Asia-Pacific director before he took office in July 2012.

Leung’s office denied any wrongdoing. DTZ was not immediately available to comment, while UGL said it was under no obligation to disclose the agreement, according to Reuters.

The momentum of the protests has ebbed in recent days as the government has refused to buckle to pressure from protesters who had blocked key parts of the city’s government and financial districts. There have also been incidents of violence against the protesters by other locals.

Lam’s initial agreement to meet the students for talks had raised hopes of a quick end to the protests and a face-saving compromise for both sides. However, there has been no real attempt to compromise by either side on the key issue of holding open elections, which the protesters say were guaranteed by Beijing when it agreed to run Hong Kong under the so-called “one-country-two-systems” for fifty years after taking the former British colony back under its control.

Hong Kong’s benchmark stock market index, the Hang Seng, fell sharply Friday by 1.9%, pushing back towards a four-month low. However, it was hardly out of line with other stock markets around Asia, all of which followed Wall Street lower on a fresh wave of concern about global growth Thursday.