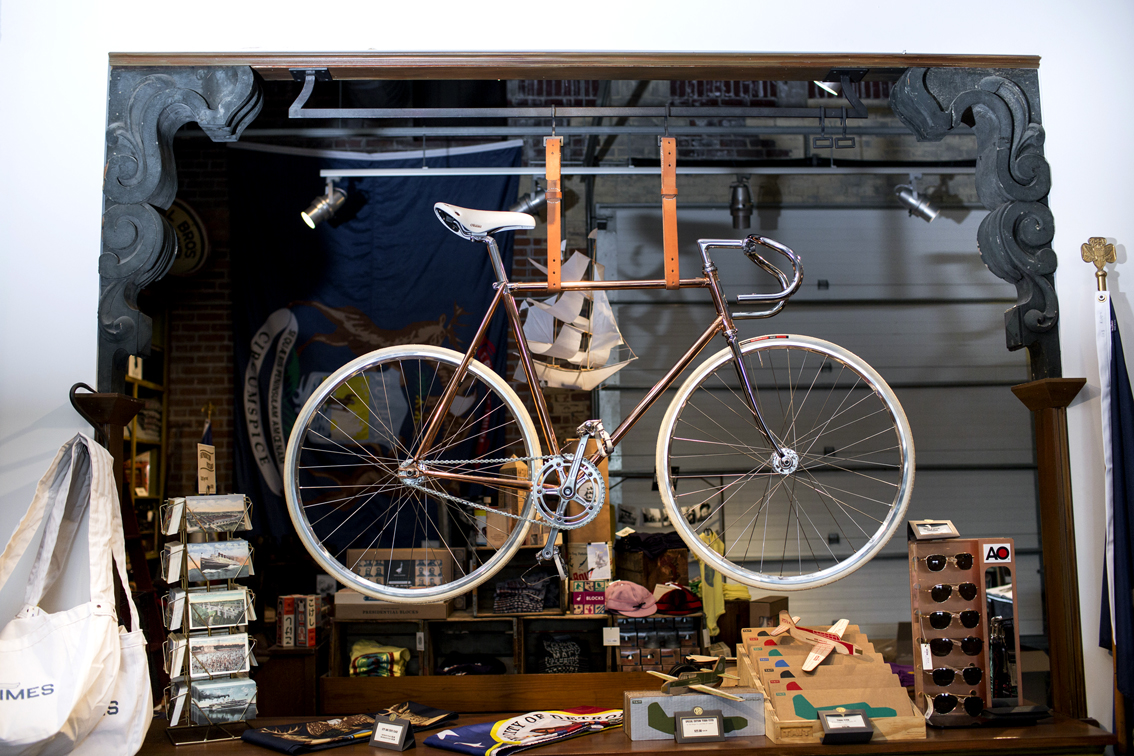 Before there was the Model T, there was the Quadricycle. Henry Ford fashioned his original automobile from four bicycle wheels and a chain at the height of Detroit’s 19th-century bike (yes, bike) manufacturing boom. If Detroit rose and fell on for four wheels, its past—and potentially its future—was built on just two. As the city wends its way through bankruptcy court this fall and its core industry lurches back to solvency, the Motor City is revving up to become a manufacturing hub again, this time for a vehicle that has no motor at all: the bicycle.

Over the past several years, at least seven bicycle makers have set up shop in the Detroit metro area, touting sleek, artisanal models. “Everybody in this town knows somebody who worked for the Big Three,” says Steven Bock, a Ford Motor Co. (F) clay sculptor who is now applying his car skills to bicycles. “It’s kind of in the Detroit DNA to build things.” Bock founded Detroit Bicycle Co. in 2011, where he makes custom handcrafted single-speed and fixed-gear bikes ($4000 to $6000) when he’s not sculpting full-size clay models of cars for Ford.

Joining Bock is Slingshot Bicycle, a 30-year-old Michigan-based company that moved into its new Detroit-area manufacturing facility in June as it repatriates production from Taiwan. Then there’s 313 Bicycle Works, started recently by Detroit firefighter Mike Sheppard and named  after the Motor City area code. Not to be left out, Shinola, a manufacturer of trendy watches and other goods, assembles Wisconsin-made bikes at its new Detroit storefront.

The biggest Motor City bike maker, though, is Detroit Bikes. Founder Zak Pashak invested $2.5 million in a 50,000-square-foot factory (staffed by former engineers of General Motors (GM) and other carmakers) that mints about 10 bikes a day and has sold nearly 1,000 so far. Eventually he aims to produce as many as 50,000 a year.

If its plan is successful, Detroit Bikes alone would double the number of two-wheelers manufactured in the U.S. today. The industry largely disappeared a generation ago when Schwinn, Trek, Huffy, and other American brands moved most of their manufacturing offshore in the 1980s and ’90s. A mere 56,000 bicycles were produced in America last year, the National Bicycle Dealers Association estimates. “Hopefully we can see the rebirth of the bicycle manufacturing business in this country,” Pashak says.

Several factors seem to be driving the renaissance of the bike industry in Detroit. Beat-up by the Great Recession, Detroit’s vacant factories and cheap rent have lured young entrepreneurs and artists to set up shop in the city. The vestiges of car manufacturing—leftover machinery, abundant powdercoat shops and of course, skilled auto industry veterans seeking work—have proven a treasure to bike makers and other craftspeople.

Detroit’s mean streets have also grown friendlier. As the population has shrunk, so too has the number of cars on the city’s wide roads, which seldom see traffic jams anymore—making them a haven for cyclists. Since 2006, Detroit has added 150 miles of new bike lanes, including some transformed from old railroads like the Dequindre Cut, says Todd Scott, head of the Detroit Greenways Coalition (and local bike historian).

Meanwhile, deepening poverty and joblessness in Detroit may encourage biking as a more affordable alternative to driving. While the number of Detroit workers commuting by car has fallen by 20% since 2007, those commuting by bike has surged 43%, according to Census data. Detroit has had the biggest increase in bike commuting of any major American city since 1990, reports the League of American Bicyclists.

Now, nascent bicycle makers are hoping to capitalize on continued growth and enthusiasm for biking in Detroit—as well as demand for products that are not only American-made, but homegrown in the Motor City itself. Pashak of Detroit Bikes, for one, is looking to raise $1 million from investors to accelerate the factory’s current output more than tenfold and become a true mass-producer of bicycles. And Bock’s Detroit Bicycle Co., which has a bike on display at the Henry Ford Museum, is also seeking at least $200,000 in investment in order scale up his one-man operation with additional builders and a showroom.

Jay Townley, co-founder of the Gluskin Townley Group who studies the American cycling industry, sees a rekindling of the Ford-era biking boom in Detroit. Between growing ridership and a rebirth of two-wheeled manufacturing, he says, “All of a sudden you’re in what turns out to be the bike city of the country.”

An abbreviated version of this story appeared in the October 27, 2014 issue of Fortune.