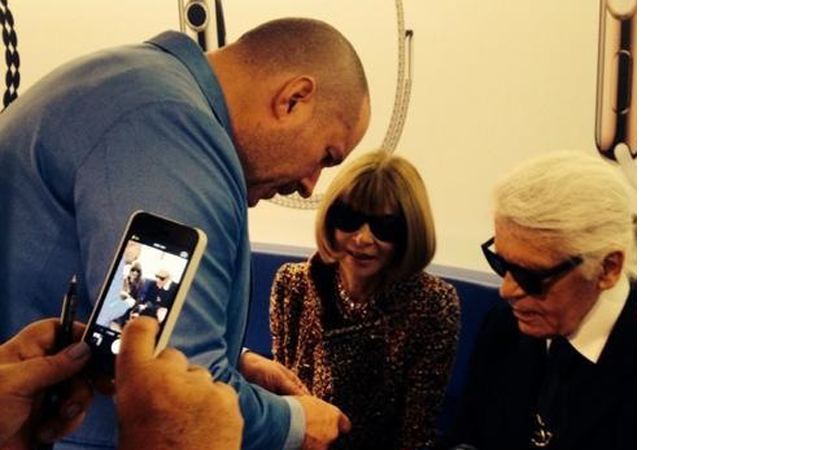 The headline — which captures in six words Apple’s latest marketing campaign — was lifted from Jess Cartner-Morley’s Paris fashion week dispatch in the Guardian.

Jony Ive and Marc Newson are power players in fashion now,” he writes. “Forty-five minutes before the Chanel show was due to start, Karl Lagerfeld himself arrived at the Apple Watch preview, and sat down with Anna Wintour to try on a watch and be talked through the functionality by Ive and Newson. If that’s not Apple flexing some powerful fashion muscle, I don’t know what is. The breakfast launch was impeccably fashion-week-worthy: it took place at Colette, the most famous boutique in Paris, with espressos and Evian and miniature madeleines. Further proof that Paris fashion royalty are on Team Apple Watch: Azzedine Alaïa is hosting a dinner in honour of Ive.”

I put the names in boldface not because they mean anything to me, but because they do for the intended audience: People who care about Paris fashion. People accustomed to dictating popular taste. People who might plunk down thousands of dollars for an 18-carat-gold computer.

Apple offered that audience two chances this week to look at (but not necessarily touch) the Apple Watch:

When Ive shows it to me — weeks before the product’s exhaustive launch, hosted by new CEO Tim Cook — in a situation room that has us surrounded by guards, it feels like a matter of national security. Yet despite all the pressure, he really just wants you to touch it, to feel it, to experience it as a thing. And if you comment on, say, the weight of it, he nods. “Because it’s real materials,” he says proudly. Then he wants you to feel the connections, the magnets in the strap, the buckle, to witness the soft but solid snap, which he just loves as an interaction with design, a pure, tactile idea. “Isn’t that fantastic?”…

As you watch Ive walk off, politely thanking people, you recall that he closed up his private presentation by asking you to listen closely to a watchband as it is pulled off and then reconnected. “You just press this button and it slides off, and that is just gorgeous,” he was saying. He encouraged you to pause. “But listen as it closes,” he said. “It makes this fantastic k-chit.” He was nearly whispering. And when he said the word fantastic, he said it softly and slowly—“fan-tas-tic!”—as if he never wanted it to end. This is perhaps Ive’s greatest achievement: not that we can get our email more readily, but that we can stop to notice a small, quiet connection.

The point is, Apple wasn’t born in a garage knowing how to do this stuff.

To build what it hopes will be its next big thing, it has hired experts in optics, sensors, biomedicine, mobile payments and more. To market it, it hired experts in selling luxury brands with huge markups.

Me, I’m in jeans, like the guys in line outside Collette. I might pay $350 for an Apple Watch. I’d happily pay more if it came with a built-in cellphone.