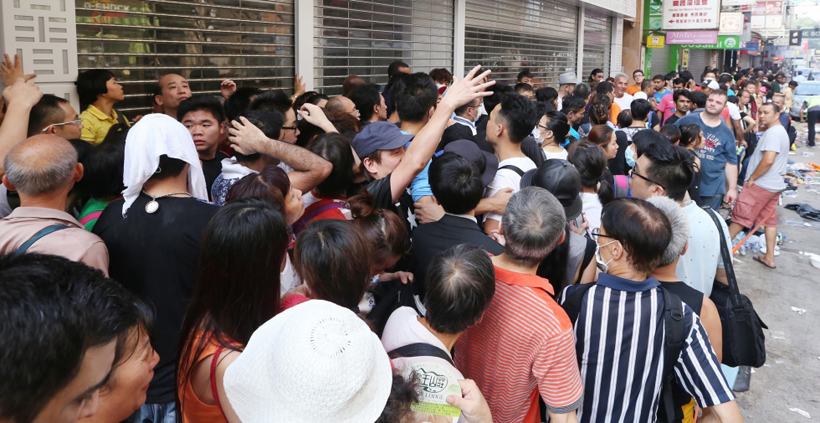 Lots of freshly reported detail in the papers about how large numbers of new iPhones are making their way to mainland China from embattled Hong Kong, a phenomenon the New York Times managed to construe as “A Glum Sign for Apple.”

From the Wall Street Journal:

Hong Kong authorities said Sunday that they foiled an apparent attempt to smuggle 3 million Hong Kong dollars ($387,000) worth of high-end electronics—including at least 138 new iPhones—that were being loaded onto a speedboat in a rural coastal area opposite the Chinese shore. Customs officials said several men fled on the boat when approached by law-enforcement officers, leaving behind 15 boxes that also included 1,890 hard drives and 16,235 computer-memory chips.”

From the L.A. Times:

The new iPhones have been smuggled into mainland China in paper containers for cream pies and toothpaste, coffee and tea boxes; one man was even caught carrying eight devices in his underwear.”

From the New York Times:

Hong Kong’s marine police have played a cat-and-mouse game with smugglers who use speedboats to take iPhones into China. On Thursday night, the police ran off several men in a mangrove swamp loading boxes of iPhones into a flat wooden boat that would ferry them out to a nearby speedboat. They seized 286 iPhones, according to a statement from Hong Kong customs. In other instances, customs has found hundreds of phones concealed in the axles of trucks and in hidden compartments in cars…

“Scalpers organize Hong Kong customers with local identity cards to preorder phones that the scalpers then collect outside the store, paying about $325 extra per phone. The phones are then smuggled to wholesalers in Guangdong, across the border from Hong Kong, and from there are shipped to cities across China.”

Dealers in the mainland’s grey market for smartphones say they have lost heavily by betting on Apple’s new iPhone 6. They blame an abundant supply from Hong Kong and other overseas sources for bringing down prices.

As reader 程肯 points out, reports that the iPhone 6/6+ might win Chinese government approval any day now has forced grey market prices and expected retail prices to converge.

How exactly is this bad for Apple?

Thanks to The Loop’s Dave Mark for the tip.