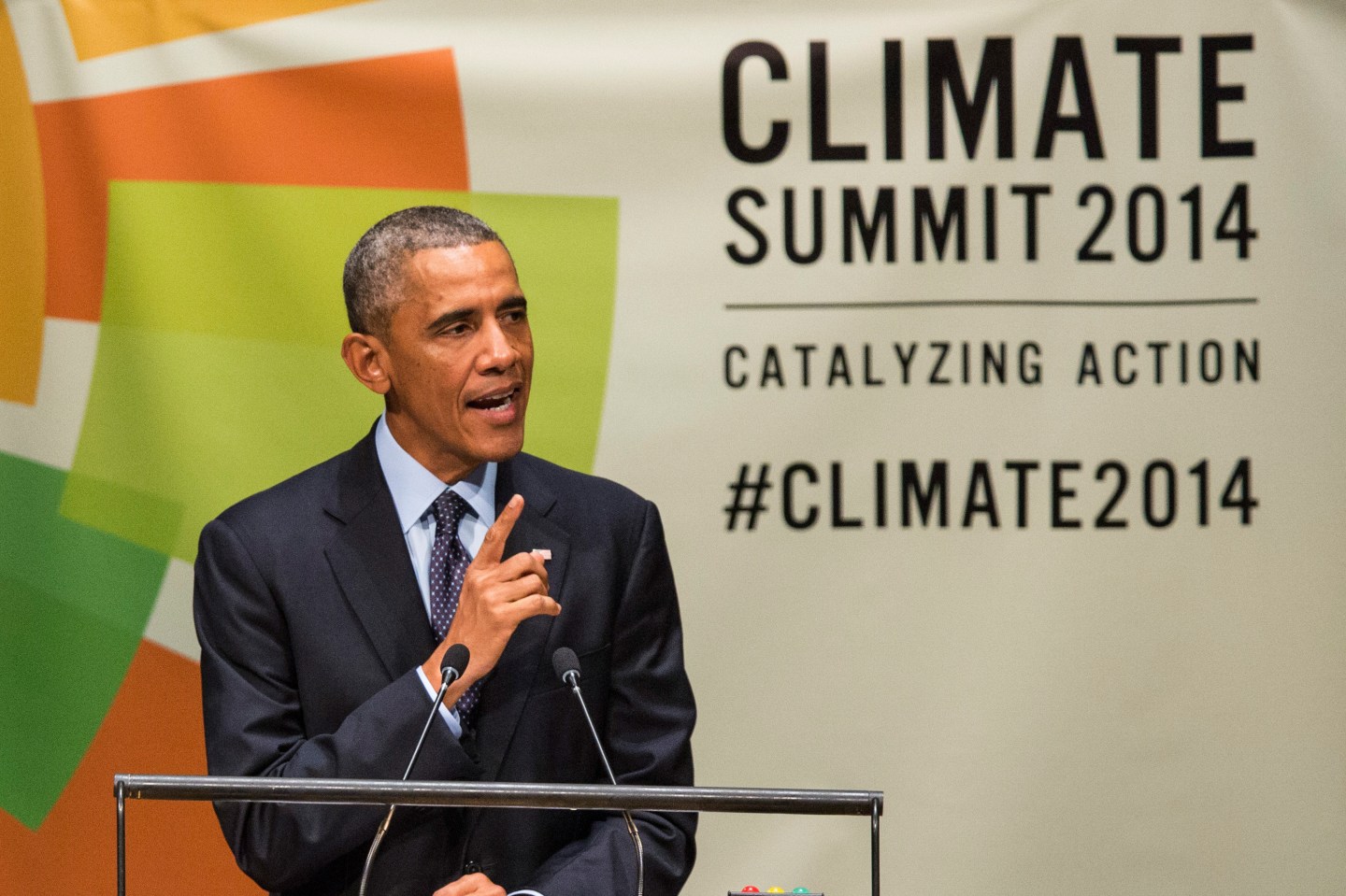 Amid stories of disappearing Pacific islands and Africans displaced by a warming planet, more than 120 world leaders gathered at the United Nations Tuesday to call for an international agreement to cap greenhouse gas emissions and help avert some of the worst impacts of climate change.

The leaders used the one-day summit to announce plans by governments, investors and financial institutions to mobilize more than $200 billion to finance clean energy and support resilience among vulnerable nations. Several other U.N. initiatives were announced including efforts to reduce methane, a harmful greenhouse gas as well as plans to invest in cleaner transportation and a pledge to end deforestation by 2030.

Putting aside the bombings in Syria and a worsening outbreak of Ebola, President Obama came to the summit and called for immediate action on the one “issue that will define the contours of this century more dramatically than any other.”

Obama promised the United States would lead a global effort to forge an international agreement next year that would require all countries to set emission targets by 2020 and provide upwards of $100 billion annually to help the poorest countries shift away from fossil fuels and adapt to the worsening floods and heat waves that come with warming temperatures.

“The climate is changing faster than our efforts to address. The alarm bells keep ringing. Our citizens keep march,” Obama said, ticking off impacts of climate change from the fact the past decade was the hottest on record to wildfires in the West that stretch all year to Hurricane Sandy that devastated New York in 2012.

Opening the session alongside Vice President Al Gore and a bearded Leonardo DiCaprio, United Nations Secretary-General Ban Ki-moon warned that time was running out for the world to agree on a legally-binding deal that would force nations to set emissions targets by 2020 in a bid to keep temperatures at 2 degrees Celsius. The summit is seen as the beginning year-long negotiations that should culminate with a deal in Paris next year. But negotiations for the past seven years have been fraught with clashes between rich and poor nations, symbolized in part Tuesday by the absence of leaders from China and India.

“We need a clear vision, anchored in domestic and multinational actions, for keeping global temperature rise below 2 Degrees Celsius,” Ban told delegates. “The world needs to see what opportunities there are to cut greenhouse gas emissions and provide sustainable energy sources. By seeing what is possible, others can find inspiration and follow suit.”

Ban said he was especially heartened by the climate march that drew upwards of 300,000 on Sunday in New York and the promises of financial help. The $200 billion would be available at the end of 2015. It includes pledges by donor — several billion of dollars expected Tuesday — and developing countries to capitalize on the Green Climate Fund, which was set up 2010 to help facilitate climate funding from developed to developing nations.

“I am very impressed by the financing mobilized at the Summit by both the public and private sector. This will serve as a catalyst in finalizing a universal and meaningful agreement at Paris on climate change in 2015.” “The Summit has created a platform for new coalitions and has brought leaders from both public and private sectors across the globe to not only recognize climate risks, but to agree to work together.”

The financing reflects the growing clout of the private sector in the negotiations. Long sidelined over their perceived indifference the talks, the U.N. has sought them out and it appears to be paying off. Along with the financing, more than 100 CEOs are expected to get time later in the day with Ban to illustrate what they are doing on climate and some 30 are expected to announce plans to internalize the price of carbon in their operations and advocate for the setting a price on carbon emissions.

French President François Hollande, who will host next year’s summit, said his country would commit $1 billion in the next few years to the Green Climate Fund and hoped other nations to do their part. He said such contributions “will enable this fund to attract the necessary finance to allow private financing to join up and ensure investments are profitable not only for those who make them but the whole world.”

Hollande also called for the business community to chart a new path that isn’t depdendent on fossil fuels.

“What we can achieve through his conference is to forge a new model of development for the world,” Hollande said. “There will have to be a new pricing system for carbon which will have to serve as a signal for the way we use it. We have to bring into play what finance has in terms of imagination and shift to it to serve the good of planet. We need to define a new economy for the world.”

World Bank Group President Jim Yong Kim also praised the unexpected partnerships that have come out of the summit, saying it helped inspire a coalition of 73 nations and more than 1,000 companies that on Monday came out in support a price on carbon. He also said the markets are responding the calls for change, with the green bond market reaching $25 billion – well surpassing Kim’s goal of $10 billion he set in January.

“It seems clear the interest is rising in investing in sustainable energy and other ways of combating climate change,” Kim said. “This is encouraging but unfortunately it’s not enough.”

Of the $200 billion, about half comes from institutional investors who have committed to expediently decarbonize and to measure and disclose the carbon footprint of at least US$500 billion in assets under management. Another $30 billion comes from commercial banks providing climate finance by the end of 2025 while the insurance industry has agreed to double its green investments to $82 billion by the end of 2015.

Meanwhile, a group calling itself free Divest-Invest movement said it has now has over 800 global investors representing $50 billion in total assets to agreement to divest from their holdings in fossil fuels over the next five years. Those making the commitment include foundations, individuals, faith groups, health care organizations, cities and universities around the world.

“John D. Rockefeller, the founder of Standard Oil, moved America out of whale oil and into petroleum,” said Stephen Heintz, president of the Rockefeller Brothers Fund.

“We are quite convinced that if he were alive today, as an astute businessman looking out to the future, he would be moving out of fossil fuels and investing in clean, renewable energy.”

The U.N. also announced that a coalition of mayors representing 400 million people has committed to reducing their annual emission by as much as 16 percent. A public-private partnership also pledged to cut deforestation by half by 2020 and end it by 2030. Made up of commodities companies, governments, activists and indigenous groups, the pledge is projected to eliminate between 4.5 and 8.8 billion tons of carbon dioxide each year or equivalent to the amount produced by the one billion cars that are currently on the world’s roads.